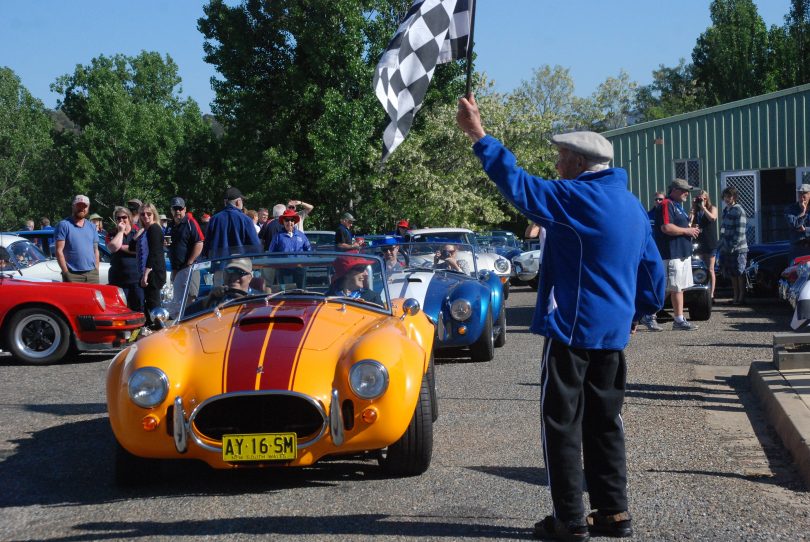 The Cooma Car Club AKA the Cooma Monaro Historic Automobile Club is celebrating its 20th anniversary this Saturday with a Gala Open Day at its jaw-dropping clubhouse north of the town.

In its relatively short and proud history, the Car Club has purchased the buildings on Bolaro Street and established an outstanding workshop and showroom complex that is the envy of car enthusiasts all over Australia.

Kel Goodman has been a member from the very start, all the way back in March 1999.

“There was a guy who put an ad in the paper wanting to know if anyone wanted to form a car club,” he remembers.

“So we all got together and this is where we’ve ended up.”

Two hundred people are now members of the club, an organisation that has a hand in a host of regular events on the Snowy Monaro calendar including Cooma Motorfest, Snowy Mountains Touring Classic – Surf to Summit Rally, Over 50s Classic, Girderfork Motorbike Rally, Mount Gladstone Hillclimb, and the Monaro Billy Kart Derby.

A self-confessed Holden nut. Kel’s collection, “starts at a 56 FJ and goes right up to VL Commodore, I’ve got about eight cars, it’s a bit sad and keeps me poor,” he laughs.

The comradery of the club is just as important as the gallery of historic and prestige vehicles on display in the clubhouse.

“Every Tuesday there is a group of men that get together here and they do maintenance and have a chin wag,” Kel says.

One of the highlights of the club’s 20 years was the role it played in the 2018 ’70 Years of Landrover’ spectacular that took over Cooma. They are gearing up for something just as big in 2020 for the Holden FX/FJ Nationals.

Adding more history and points of interest to the factory-sized clubhouse is part of the vision for the future with plans for a mural and old fashioned mock-up service station along the back wall.

“But we also put a great emphasis on bringing young people into the club,” Kel says.

“We have a small hill climb car young drivers can borrow, and young people are always welcome in our mechanics workshop.”

Everyone is welcome to the 20th-anniversary celebrations at Cooma Car Club, 11 Bolaro St, this Saturday (May 11) for a great family fun day. The club’s extensive display of cars and memorabilia will be on show inside and outside, a free barbecue, live music, and kids’ entertainment will run through the day from 11 am.

Colin Mitchell - 22 minutes ago
You Muppets should let Kindergarten kids vote because that what you are turning Canberra into one big Kindy. View
Capital Retro - 1 hour ago
"I think voting should be proportionate to the amount of tax you contribute." So that means all people who don't pay income t... View
Maya123 - 4 hours ago
So you work in this area of research and know more than those who are studding it? Science is evolving as more is learnt. Whe... View
Sport 3

Catherine Sanders - 1 hour ago
Micknali Weyman you going? View
Greg Pearce - 4 hours ago
Julia Cook, Hannah Pearce, Georgia Pearce & Leslie Cook for you know who.... View
Lucas Hayden - 8 hours ago
This is one of the best facilities ive ever seen...... I am not a "horse" person but I almost became one just walking around... View
Opinion 64

Trish Casey - 8 hours ago
Mark Parton has helped age care and those with disabilities living in ACT housing more than anyone .we have had 3 break ins t... View
show more show less
*Results are based on activity within last 7 days

GRAPHIC CONTENT: Please be aware some readers may find this court report highly disturbing. A Canberra boy, not yet 16-years-old,...
Breaking 0

@The_RiotACT @The_RiotACT
The @gg_australia got on his bike to support an Integra Service Dogs Australia cross-country charity ride https://t.co/LFB6Gl7Ooi (5 hours ago)