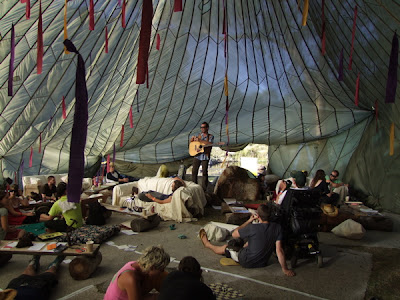 The subject on everyone’s mind is beer.

I hear that on Friday night the long haul campers drank more beer than the whole festival sold last year. Saturday saw perfect weather arrive and the capacity crowds that came with it saw the event run completely dry of beer for a heart-wrenching half hour before normal service was resumed.

High quality problems to have.

One thing has been resolved though. With so many bands playing their last show at the festival there’s a consensus that while the first show is a “Premiere”, the last one can be called a “Derriere”. The Ellis Collective’s last show with Alison Procter was so thronged with professional photographers that we were queuing for the good shooting angles.

A special shout out has to go to the female festival goer who flew in from Adelaide on Friday night and then roller bladed through the night from the airport and up the mountain to get here. As long as I live I will never be that hardcore.

When it comes to hardcore I have to mention the Ellis Collective’s 3am effort this morning kicking each other in the balls for the amusement of the crowd (There’s a photo of Matty taking a kick like a man). I’m sad to report I was the one who said enough was enough and it was time to stop and sit down. The security guard thanked me.

The biggest crowds last night assembled for Blue King Brown, you could hear the cheering a kilometre away. The surprise packages of the evening with the crowd were the ever astonishing Mr Fibby who packed the Gibraltar Stage for a performance which, at the end of the day, is essentially story telling. They got a standing ovation.

In fact the local acts have been showing their class all weekend getting the same crowds as the national and international performers. A special shout out to Germany’s “The Beez” who have been out and about talking to the punters and enjoying the festival.

One thing that stands out is the number of day trippers who came out yesterday but are now vowing to camp next year. We hardy campers smile and nod and try not to be too smug about the errors of the day trippers ways.

The cover photo here is from possibly the most relaxed space in existence, the parachute enclosed chai tent.

Best news of all is that signs have been posted at the drumming creative campsite warning of the dangerous hungover mob which will descend if they start up before noon. The campsite this morning was beautifully still and quiet. Despite having to get up at 9am to entertain and edify you all with this report, things are good.

It’s another glorious day in the mountains, people are having a great time, and there’s a huge lineup of entertainment still to go today. I’m told Sunday night is the biggest party of all when the purple-bellied volunteers get to let their hair down.

You might be right about the white anglo saxons, not about them being protestants or 20 somethings.

J’zuz seekay it’s the negativity of folks like you that are putting a heck of a lot of people *off* the riot-act. Tell us what *you* did on the weekend, and we’ll all have a go at questioning why you made the decisions you did, eh?!

Back on topic, I have to say that this year’s Corinbank festival was one of the best events I’ve been too. The setup was great, the sound was awesome, and the overall atmosphere and vibe was just terrific. Laidback, relaxed, and just good fun. I could sit back with a few frosty bevvies and be left to my own devices, or I could get in amongst it all. Either way, no worries.

Kudos to the organisers for v. reasonable drink prices (I can see why they ran out briefly), good food selection (quick, reasonable service) and a fantastic music line-up. I’m not much into the tree-hugging-gay-whale-saving-hemp-beanie-wearing side of things, so to be honest, my rating of the overall festival is based pretty much on that line-up. seekay, “third divsion” the featured artists/bands may be, but everyone I saw put 110% effort into their performance, and the crowd reacted accordingly.

Why the f— would anyone other than the crustiest crusties sit in the dirt for a few days to hear a bundle of third division acts?

Why the f— would anyone other than the crustiest crusties sit in the dirt for a few days to hear a bundle of third division acts?

(Or some severe ballkicking. At least it will take your mind off the cold)

A hippy cold?
You can probably cure that with some reiki, homeopathy, or some herbs waved over your lungs.

It was an amazing experience.

I also now have some sort of god damn hippie cold.

Wicked write up, you’ve certainly sold me for next year – thanks.

Mirjam Herzog - 2 hours ago
Chris Cross' pro argument citing the rates income from diplomatic missions is a highly contentious issue as the concept seems... View
Julia Ross - 10 hours ago
If it gets developed by the usual developers in Canberra, it will be a soul-less concrete wasteland like Gungahlin which will... View
Mark Valerius - 11 hours ago
A great idea for space that’s used for sweet FA. View
News 7

Conrado Pengilley - 10 hours ago
The Chi-Na virus will be contained. View
News 61

Ekaterina Smirnova - 15 hours ago
What could possibly go wrong? View
Christopher Miles Y Lopez - 15 hours ago
The ACT is under the throes of a neo liberal pseudo scientific dictatorship right now. I'm sure that the space that will be m... View
Peter Marshall - 19 hours ago
If the magistrates and judges stop sending new people into prison, or expecting remandees to turn up to court, and if no-one... View
News 3

dcollins - 19 hours ago
I don't see a problem. I don't think maintaining paddocks for the private use of a few horse owners is a priority. Different... View
Julia Ross - 19 hours ago
How many flippin' embassies does Canberra need? Why do they all have to be on prime land? What about using the land to build... View
jof50 - 23 hours ago
The myopic and shouty Guardians of the Lake are stuck in a time warp. They want to put a glass bowl over central Canberra and... View
News 235

dcollins - 20 hours ago
All investments have their risks, it's only that lots of property investors don't get this, they have this weird sense of ent... View
News 14

Julie Maynard - 24 hours ago
Most people are saying there will be a strain on IT infrastructure. While that is true, there are ways of managing the stress... View
Community 13

One of Canberra's largest not for profit childcare and social services providers says that unless the Commonwealth Government urgently releases...
Motoring 77

Despite world oil prices plummeting in recent weeks, Canberrans are still paying through the nose at the bowser. At Weston,...
News 24

@The_RiotACT @The_RiotACT
From sharp increases in demand for services to cancelled fundraising events, Canberra’s community sector is having a tough time weathering the COVID-19 storm https://t.co/fUHYSBtSU5 (10 hours ago)

@The_RiotACT @The_RiotACT
Private hospitals and day clinic resources are being readied to form part of the ACT's COVID 19 response as the Territory registers another small increase in confirmed cases https://t.co/lELjDhKiLb (13 hours ago)