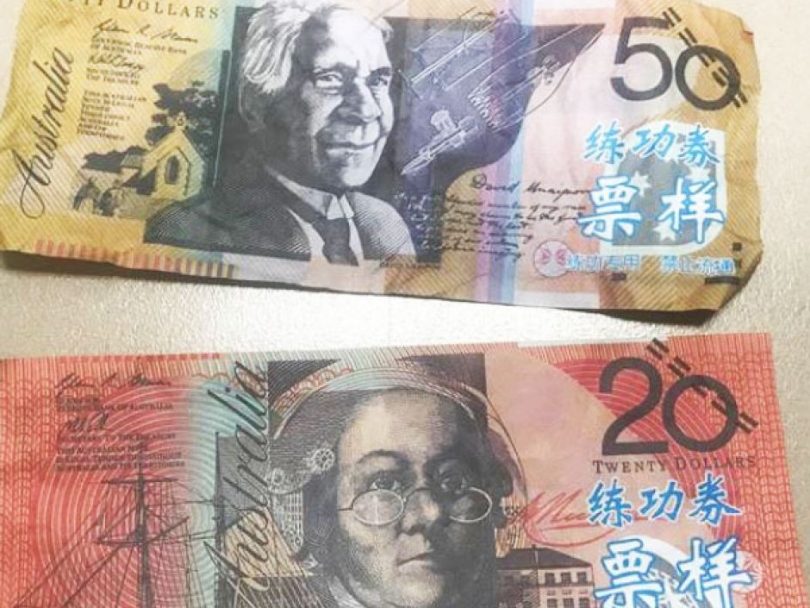 Counterfeit notes are being circulated in Canberra, with police warning business owners not to accept notes that don’t look legitimate.

ACT Policing states that in the past month police have received several reports of counterfeit notes being used in the ACT.

The counterfeit notes identified are similar and quite distinctive. They are printed on low-quality paper and are superimposed with Chinese characters. They also do not have serial numbers or the other security features that appear on genuine Australian currency.

The notes are manufactured for use as a training aid and are purchased online.

Community and Safety Acting Superintendent Matthew Craft said business owners and members of the public should be vigilant and take the time to inspect notes.

“Take the time to look at the note, if you aren’t satisfied that the note is legitimate don’t accept it,” said Acting Superintendent Craft.

“If you receive a banknote you believe is counterfeit, try to handle it as little as possible to preserve fingerprints. Note the description of the person who gave it to you and contact police on 131 444.”

People found to be unlawfully possessing or using counterfeit currency can face imprisonment of up to 12 years.

More information about counterfeit currency can be found on the AFP website and the Reserve Bank of Australia website.

And here I was thinking those Chinese characters only meant “Made in China”. Damn!

retep - 9 minutes ago
Applause. Thanks for your efforts. We too try to alleviate our energy use in similar ways. Also agree with your observations... View
HiddenDragon - 2 hours ago
Canberrans (particularly those without the income of a professor or an MLA) who are still absorbing the recent news about a b... View
jwinston - 2 hours ago
Jeez Chewy - I never picked you as a Tim Flannery fan boy? View
News 3

Paul Leins - 29 minutes ago
Chinmoy Misra so you're saying *you* can't maintain a reasonable speed in built up areas without some kind of ridiculous urba... View
Jeff Shapiro - 46 minutes ago
Ken Owers you need an idrive adapter or buy a Mercedes View
Chinmoy Misra - 56 minutes ago
Paul Leins Congratulations. You missed the point entirely.... View
Business 63

assiduous - 1 hour ago
A scheme like this is akin to rearranging the deck chairs on the titanic, as opposed to meaningful reforms, planning and infr... View
Ann-Maree Jacobs - 2 hours ago
Four tries every time The site is down ! View
Lisa Hogan - 11 hours ago
Agreed. The current scheme only benefits those with the disposable income to buy stuff. So another 'discount' for the rich. A... View
Community 4

Alicia Conley - 4 hours ago
Liberals on a local level people. Get them in... View
Opinion 37

Timothy Bailey - 5 hours ago
The AWM and "ANZAC" are very powerful icons. Difficult to argue with or question. The whole 'Beersheba - last great cavalry c... View
BlowMeDown - 11 hours ago
I think you've just summarised the Labor/Greens strategy re promoting light rail by derailing, as they did, the bus system in... View
News 1

ChrisinTurner - 7 hours ago
I had to look up stealthing on Google. Seems to have changed the whole intent of the word "stealth". The mind boggles with th... View
show more show less
*Results are based on activity within last 7 days

It's higher off the ground than any of its rivals. It has an all-wheel-drive system and driving modes for deep...
Community 28

@The_RiotACT @The_RiotACT
Gungahlin is often seen as the new part of Canberra, but some locals have lived their whole lives there. The town centre is already big and it's still growing https://t.co/Kqq2xR1Mmm (26 minutes ago)

@The_RiotACT @The_RiotACT
Opposition Leader Elizabeth Lee said she has received "a huge amount of interest" for her stealthing bill, which she says is a positive first step to raising awareness about "the existence of such a heinous practice" https://t.co/YQDtFOWLYU (2 hours ago)