Creating a cafe: the build 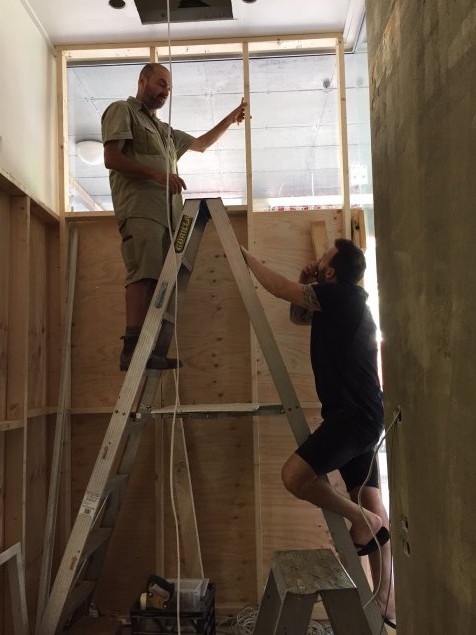 In between sourcing suppliers for our shop, such as Gabriel Coffee (you can read about it here), the required documentation was signed off and we could finally commence the build.

We had contracted a builder very early on however, due to various commitments and other delays on the builder side, the shop continued to be at a stand still.

The reality was, we were running out of money fast. We had taken out a loan to build the business and pay the initial set up fees; for every day, week and month we weren’t open, we were losing money. I couldn’t just sit back and watch our account drain, we needed to come up with a solution fast.

Mike and I were both working full time and were unable to be at the shop, which in itself is a problem; someone needs to be there to direct tradies. We also needed the builder we had contracted, because you can’t build anything without a builders licence.

I rang my dad who has been a carpenter/shop fitter for most of his life to ask for his advice. My dad is a tough love kind of guy; he was more outraged over the delay than Mike and I combined. He yelled at me for a little; apparently he couldn’t understand why I hadn’t organised myself better, and then continued to tell me how tradies won’t respond to me because I’m a woman (this actually proved true, but I will tell you about it later on). After his rant was over, my dad decided that he would pack his bags and make the drive to Canberra, to get shit sorted.

My dad owns a farm in Nimbin, QLD where he is currently building a collection of various farm animals. He very sternly told me that he couldn’t really leave them and would only be in Canberra for a few short days; that meant that Mike and I had to ensure that everything was ready to go before my dad arrived.

One of the things we had to organise was for my dad to work under someone’s builder’s licence. Luckily for us, the builder we had originally contracted was willing to oversee the building project and allowed my dad to work on the shop.

Because we were only going to have my dad for a few short days, we needed to line all of our contractors up, in order and quickly, to get various jobs done. Based on our design and builder’s advice, we wrote a to-do list and started sourcing various contractors to complete works; this turned out to be one of the most challenging tasks on our check list.

In my experience, building a shop is little bit like a well-organised mess. You need different tradesman at different times, and sometimes you need different tradesman at the same time, and some tradesman can’t complete their work until another tradesman has been in to do theirs. And then you have the issue of our shop being 6×2 metres. It kind of sounds like a joke really, how many tradies can you fit in a shoe box? At the time it was no laughing matter. Being so close to Christmas we were finding that many businesses were going into shutdown. I literally had to beg a number of people to pretty please help.

My dad was a star, he organised everything and everyone, and he had completed the shop fit-out within a week, now all that was left to do was the cosmetic side of things really; we now had a shell and we just needed to make it pretty. I wanted my dad to stay longer, to continue to oversee the rest of the build; I at least wanted him to come back for the final touches and tried to talk him into it, but unfortunately he was unable to.

My dad headed back to Nimbin, leaving Mike and I to complete the build.

*This is the front of the shop; my dad and Mike are standing where the existing counter is.

One Response to Creating a cafe: the build
Filter
Showing only Website comments

I reckon the caption for the photo should be something like: ‘And if I dropped a hammer from up here, onto your foot, would you still reckon it’s a good idea to wear thongs on a building site?’