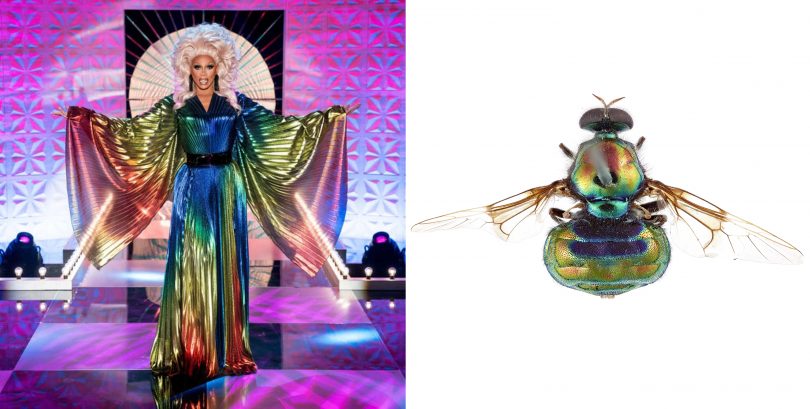 Ok so its real name is ‘Opaluma Rupaul’ but you can definitely see the similarities, right? Image: CSIRO.

The CSIRO has released the names of 150 new species with a soldier fly named in honour of acclaimed drag queen RuPaul and a group of hard-to-find beetles named after some hard-to-find Pokémon among them.

The essence of RuPaul, who is renowned for the TV show RuPaul’s Drag Race and for some extremely flamboyant outfits, is obvious in the brightly-coloured fly with the full name of opaluma rupaul.

Opaluma comes from the Latin words for opal and thorn because this group of flies has iridescent colours as well as a distinctive thorn on their undersides. 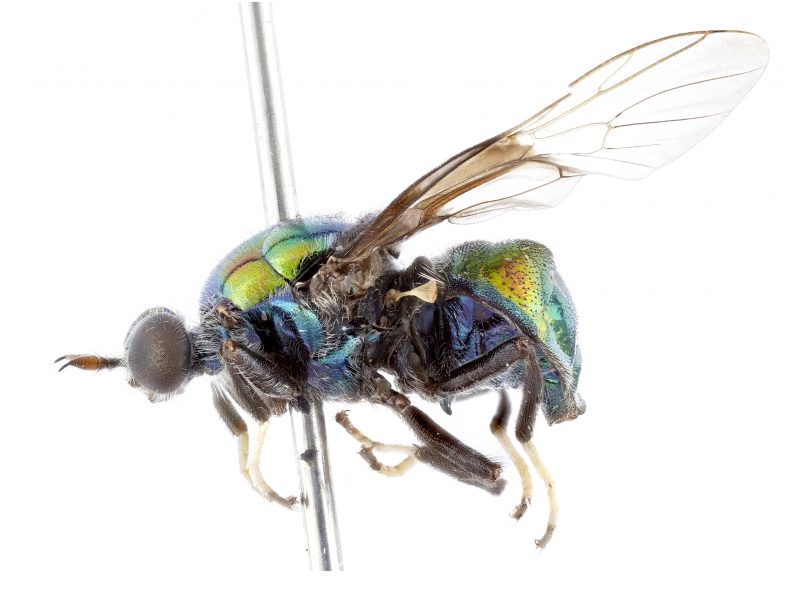 Here it is up close and personal. Photo: CSIRO.

Postdoctoral Research Fellow with the National Research Collections Australia Dr Bryan Lessard said he hoped the fabulous names of the new species would attract the attention of citizen scientists and policymakers to include these species in bushfire recovery efforts.

That’s because many of these species were discovered in areas impacted by the Black Summer bushfires.

Two of the group of 13 – Opaluma opulens and Antissella puprasina – have already been recognised as endangered species under the International Union for Conservation of Nature Red List.

According to Dr Lessard, these two species have only been known to come from Lamington National Park in Queensland, an area that was significantly burned in the bushfires.

He explained that soldier flies are valuable elements of the ecosystem, with the larvae using nutrients from dead plants and animals and the adults of the species pollinating some Australian plants.

For Dr Lessard, it’s important to name and describe Australia’s biodiversity for the country’s biosecurity.

For example, another species identified this year was an exotic species of mosquito called culex tritaeniorhynchus that can transmit a Japanese virus.

This was the first time it had been found in the country and it was initially mistaken for an undescribed native species.

A cycad-boring weevil was also named after the fictional insectoid Digmon in the Japanese anime television series Digimon Adventure.

In the television series, the insectoid possesses the power of drilling and manipulating the earth just as the weevil –demyrsus digmon – can bore into hard trunks of cycads.

READ ALSO It’s all lions, tigers and bears at the locked-down zoo

Most of the new species that have been named are insects, but there’s also a tree from the Wet Tropics south of Cairns that grows up to 20 metres tall and produces 40 centimetre long, orange-coloured fruit.

The tree was named the Pandanus grayorum and Australian Tropical Herbarium curator Frank Zich said, while the species had been known for a while, it did not previously have a scientific name.

“This species was informally known as ‘Pandanus species Russell River’, and together with Pandanus gemmifer, these are the only two Australian Pandanus species known to reproduce by growing plantlets, or pups, on their upper branches,” Mr Zich explained.

See the full list of newly-named species at the CSIRO.