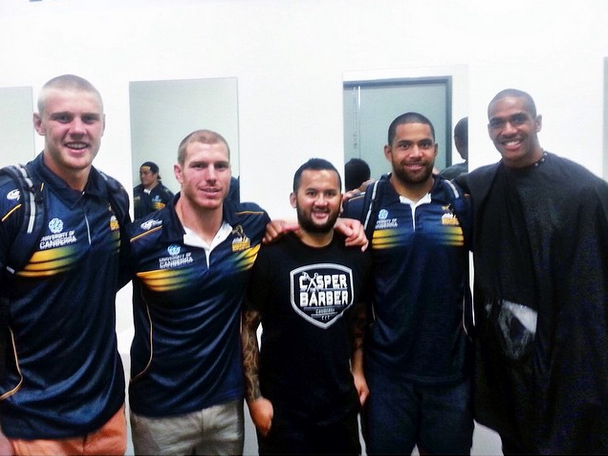 When Brumbies vice captain David Pocock took out man of the match following his team’s win against the Highlanders last month, the charity he chose to receive a $500 donation was a cause close to a teammate’s heart.

Fellow teammate and Brumbies winger Henry Speight last year raised $30,000 for the charity by shaving his iconic afro (the end result is pictured above), which until then hadn’t seen a pair of clippers for two years.

“Walk On Walk Strong provides support for kids with cancer in Fiji. Donations pay for travel and transport to Suva for treatment, as well as accommodation.

“It’s a fantastic cause and there’s a huge need for it. I’m glad my man of the match donation is going there,” David explains.

This is the first time David has supported the charity with a direct financial contribution.

“When Henry shaved his head last year a bunch of us got our heads shaved too to support both him and Walk On Walk Strong, but it’s all been through Henry’s involvement so far,” he says.

Henry, who was born in Fiji and lost his mother to cancer when he was just eight years old, was first touched by the Suva-based Walk On Walk Strong in 2012. He met around 15 kids with cancer while participating in a walk for the foundation in Fiji, but only half are still alive two years later – evidence that more support and assistance is needed.

Photo: David Pocock’s Instagram, captioned: “A few of us shaved to support @henry_speight yesterday as he raised $30k for the Walk On Walk Strong Foundation. Privileged to have him as a friend and teammate.

It’s the old story: people only want to hear of the drunken exploits of rugby league players and the Raiders have had three of the top contenders in the past few years. Reading about a footballer visiting a hospital is much less hilarious than reading about a raider being pleasured by a dog or an ex raider attempting to clean his face with his own urine.

Evidently, some of the Brumbies’ off-field incidents in South Africa have been forgiven and forgotten.

It’s the old story: people only want to hear of the drunken exploits of rugby league players and the Raiders have had three of the top contenders in the past few years. Reading about a footballer visiting a hospital is much less hilarious than reading about a raider being pleasured by a dog or an ex raider attempting to clean his face with his own urine.

How pleasing is it to see footballers making headlines for philanthropic reasons? It probably happens a lot more than the popular press report but then again the majority of footballers (indeed all sports people), who do good work, don’t seek headlines.

Trevor Hicks - 5 minutes ago
About time 👍 View
Jess Puddick - 2 hours ago
Kimberley love it, so excited for it to be restored! View
Juergen Voss - 2 hours ago
More townhouses? View
Opinion 11

Shane Westmore - 7 hours ago
Absolutely. There’s people voting now who are completely misinformed about anything going on in this country & waste their... View
Nada Krstin - 10 hours ago
oops, meant to say, cannot have it one way! :)... View
Nada Krstin - 10 hours ago
No. And if you think they are mature enough to vote at 16 or 17, then they should be tried for any crimes as adults as well,... View
Opinion 94

George Watling - 8 hours ago
Marc Edwards Spot on Marc. The best way to deal with congestion is decentralize workplaces. If everyone is travelling to a ce... View
Opinion 70

thebscaller - 8 hours ago
So what have you achieved other than self promotion? A message from someone saying that the only hope they have is for a libe... View
Mark Parton MLA - 11 hours ago
Thanks for constructively engaging, but I would reject the characterization of my advocacy for Alex as a media stunt. And I w... View
Renee Mae - 13 hours ago
Tenant went without hot water between Feb and end of April due to possums chewing parts of the hot water system. Wouldn't fix... View
Property 1

ACT resident - 9 hours ago
It is unrealistic for the Canberra community to pay for a company’s poor commercial decisions. The risks for CRS, newly reg... View
HiddenDragon - 13 hours ago
"...Capital Recycling Solutions, is in early talks with the government about its costs. It is hoping for an agreeable settlem... View
Lifestyle 1

Kat Lindbeck - 9 hours ago
Lucy that’s great. Best of luck for the future and an International career View
Community 8

Enita Hampton-Donnelly - 13 hours ago
Melissa Flis thank you. Right up her alley - one day 🙂 View
Property 11

@The_RiotACT @The_RiotACT
After 14 years, Chris Rourke has been honoured by the @ainslie_fc. The club recognised his six premierships as coach, and the life-changing culture he embodied for countless footballers https://t.co/IVaNUvjnAr (1 hour ago)