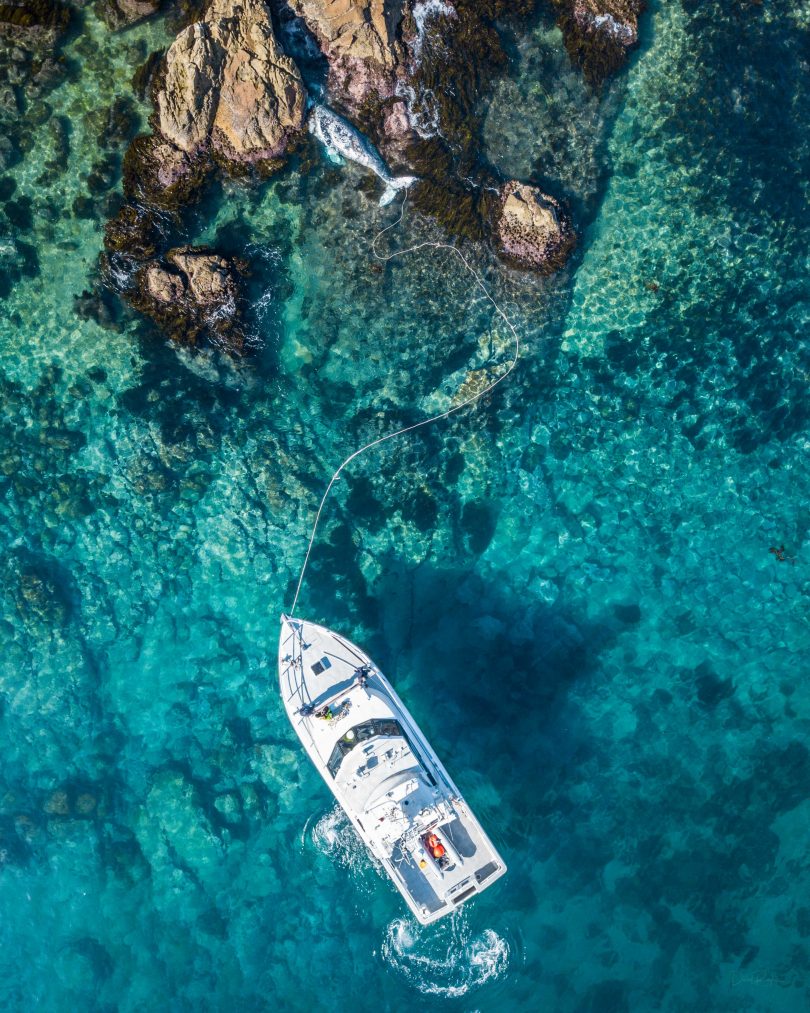 Around 35,000 Humpback Whales are expected to pass along the Sapphire Coast on their southern migration this summer. As we have seen this week, sadly some will fail the epic journey, but still play their part in the dynamic ecosystem we live alongside and shape. 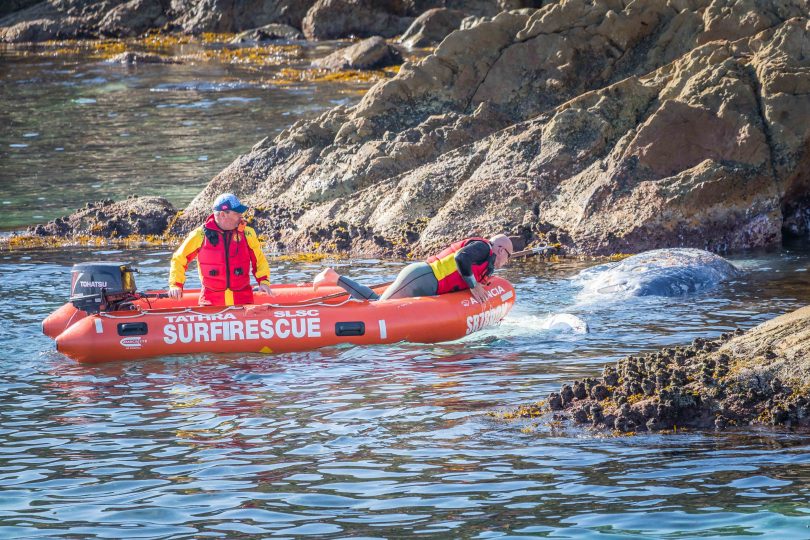 The juvenile Humpback that was found dead on rocks near the historic Tathra Wharf yesterday (August 26) has been towed from its resting place, dragged up on to the sand halfway along Tathra Beach and taken away for disposal.

*Warning: Some readers may find the footage below distressing.

Region Media understands disposal at sea was ruled out because of public safety fears involving sharks and shipping mainly. We have asked Council for further detail.

“The plan worked really well, a good combined effort, our boat was more than capable of towing the whale which would have weighed several tonnes and been about seven metres long,” he says.

Sergeant Judd says a four-meter shark waited with his boat off the beach before the carcass was taken ashore. 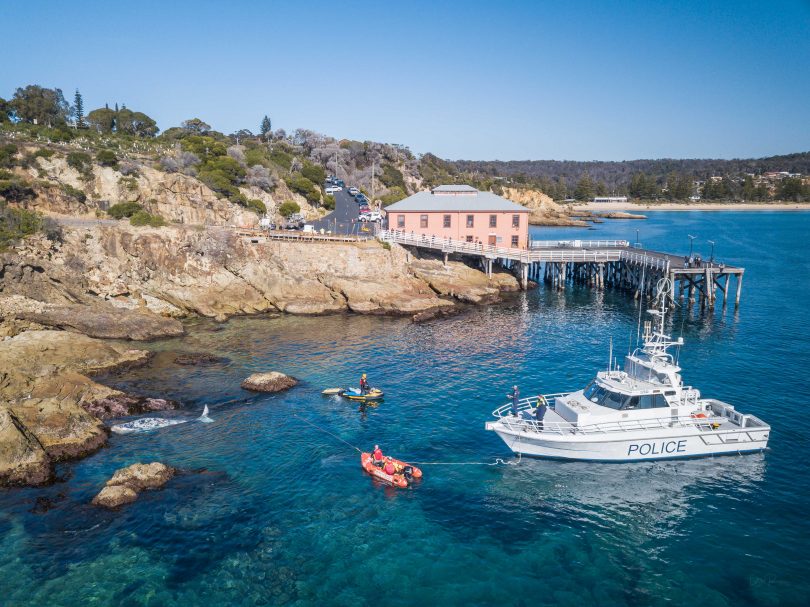 Council has closed the beach and wharf for safety reasons with the number of sharks in the area increasing on the back of the easy feed, their interest now goes unrewarded.

“Residents and visitors are urged to take care around Tathra,” a Council spokesperson says.

“Council will continue to provide regular updates on the situation and thorough inspections of the bay will be carried out prior to the beach and wharf being reopened to the public.

“Unfortunately, it is not uncommon that some young whales are unable to make the long journey to their Antarctic feeding grounds.” 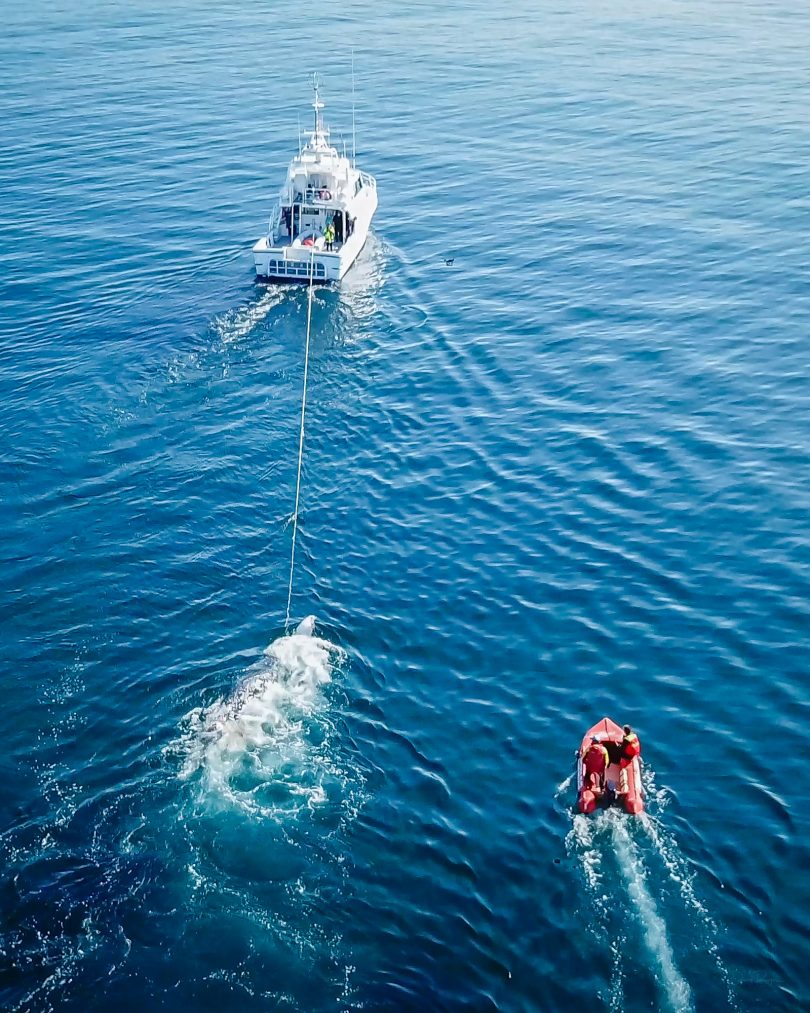 This display of nature has been easy to witness from the cliffs above, the brilliant clear waters of Tathra Bay allowing onlookers a deep dive view into the marine world. Two keen drone operators from Canberra left home at 4:30 this morning to capture the spectacle following Region Media’s coverage yesterday.

It’s thought the number of Humpback Whales are increasing by 10 per cent each year. The current worldwide population is estimated to be around 80,000. Of these, 50,000 are in the Southern Hemisphere, down from the global pre-whaling population of 125,000.

Long-time Eden based whale watcher Ros Butt, says there is still so much we don’t know.

“They used to say the whales only fed in Antarctic waters, we now know they feed off Eden, one of the few places we saw them feeding today,” she says.

“We are learning more and more as the numbers increase.”

To report injured, entangled or stranded whales contact the National Parks and Wildlife Service South Coast office on – 4423 2170 or ORCCA via their website.

Thanks to David Rogers for being so generous with his time, talent and amazing photos! You can explore more of his work HERE.

Well as sharks and peoples don’t mix all that cordially, to the tip it has to go. Shame as the birds and the sea creatures would have had a hell of a time feasting on it.

Perhaps the Council could have it lugged up to Canberra where it could go into our tip, and the methane gas produced could help power the gas generators on site.