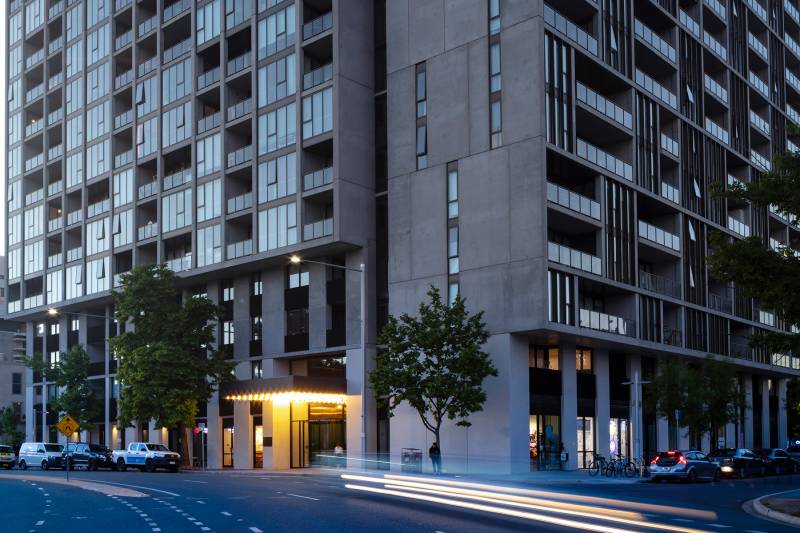 A Canberra developer’s company with less than $4000 in the bank has been wound up, and another has had its assets frozen, after a builder pursued it through the courts for a debt of more than $2 million.

Bloc completed the luxury Capitol apartments on London Circuit in March last year for Crafted Capitol Pty Ltd, one of several companies set up by Crafted Developments, whose directors are Matt James and Peter Sarris.

In July 2020, Bloc began action under the Building and Construction Industry (Security of Payment) Act 2009 to recover $2,681,165.10, obtaining an adjudication certificate as judgment, only to learn later that Crafted Capitol only had $3,446.97 in the bank.

But when Bloc pressed on with an application to wind up Capitol, it emerged a related company, Crafted Central, also run by Matt James and Peter Sarris, has assets of more than $7 million with $1,744,522.82 in the bank and a further contract worth $1.35 million to settle.

The developer had disputed the Capitol debt and made a counterclaim involving the revocation of the certificate of completion that would have greatly reduced the amount owed.

It then tried to avoid liquidating the company by citing Crafted Central’s assets as proof of solvency and making a conditional last-minute offer.

Bloc argued the non-payment was the very kind of financial pressure that the SOP Act was intended to avoid, submitting that Capitol was no more than a bank account controlled by Central, used to pass through funds for the development and shield the remaining assets.

ACT Supreme Court Justice Mossop rejected Capitol’s arguments, finding that the directors had made a calculated decision to attempt to avoid paying the debt.

“The conduct of the two directors, who are directors of both Capitol and Central, illustrates a course of conduct designed to delay or minimise the prospect of recovery of amounts by Bloc, notwithstanding the existence of a judgment against Capitol,” he said.

“The deliberate decision of the directors to fail to pay the judgment arising from the adjudication certificate and to leave the assetless Capitol without any means of satisfying the judgment in my view represents a course of conduct which gives rise to a real risk that unless restrained, the same directors of Central will deal with its assets in order to attempt to put them beyond the reach of a liquidator and hence delay or avoid the payment of amounts ultimately found to be due.”

Justice Mossop ordered the freezing of the Central assets for 28 days.

Bloc director Andrew Redwin said the result was welcomed by builders and subcontractors in the ACT and signalled a significant reinforcement of the legislative purpose and protections provided by the SOP Act, which was introduced to reform payment practices in the construction industry.

He said the decision also increased the pressure on the Barr Government to introduce a developer licencing scheme to stamp out poor developer practices.

“Proposals to introduce personal liability for directors, similar to those introduced for builders under the Construction Occupations Licensing Act, are surely now a priority,” he said.

Minister for Sustainable Building and Construction Rebecca Vassarotti said work on developer licencing was underway and industry was being consulted, and it would be delivered within this term of government.

She acknowledged that company structures could be quite complex and people deserved to know who was actually behind a development.

“This is about consumer protection, providing information and ensuring accountability,” she said.

Bloc has resumed its maintenance responsibilities at Capitol and has been working with the body corporate over the past several months to ensure apartment owners are as unaffected as much as possible.