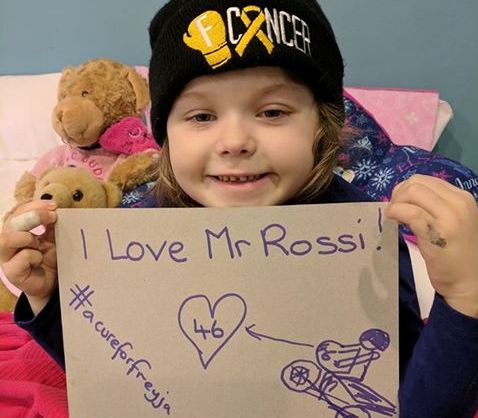 Freyja Christiansen is a big fan of MotoGP star Valentino Rossi, whose letter is the feature item of the silent auction supporting her bid to go to the US for treatment. Photo: Facebook.

A disco night and auction of rare sporting memorabilia next week will support Canberra girl Freyja Christiansen, who is in a race against time to get to the US where she can be treated for a rare inoperable cancer in her neck.

Diagnosed in January with Clear Cell Sarcoma, her family fears the five-year-old may have only six months to live if she does not have the treatment, which is not available in Australia until 2020.

They need to raise $250,000 to get there and have organised the disco, Dancing For Frejya, at the Hellenic Club in Woden on July 14 and a silent auction on the night of the rare sporting memorabilia, donated by the MotoGP community.

The memorabilia includes a personal letter Valentino Rossi wrote to his Yamaha bike when he left Yamaha at the height of his career.

Freyja’s mother Liz said her daughter was undergoing a new dual drug Immunotherapy trial at Sydney Children’s Hospital, which has slowed the disease.

“The decision has to be made this month as to what happens next. Proton Therapy has been suggested by Sarcoma experts in both Germany and the US as her only next option beyond the current trial,’’ she said.

She said patients with this rare cancer typically had not lived beyond 12 months.

The family has set up a fundraising site at www.acureforfreyja.com

The disco will be in the Olympus Room at the Hellenic Club from 7.30 pm to midnight with music by DJ Michael Liu.

Tickets are $40 via Eventbrite