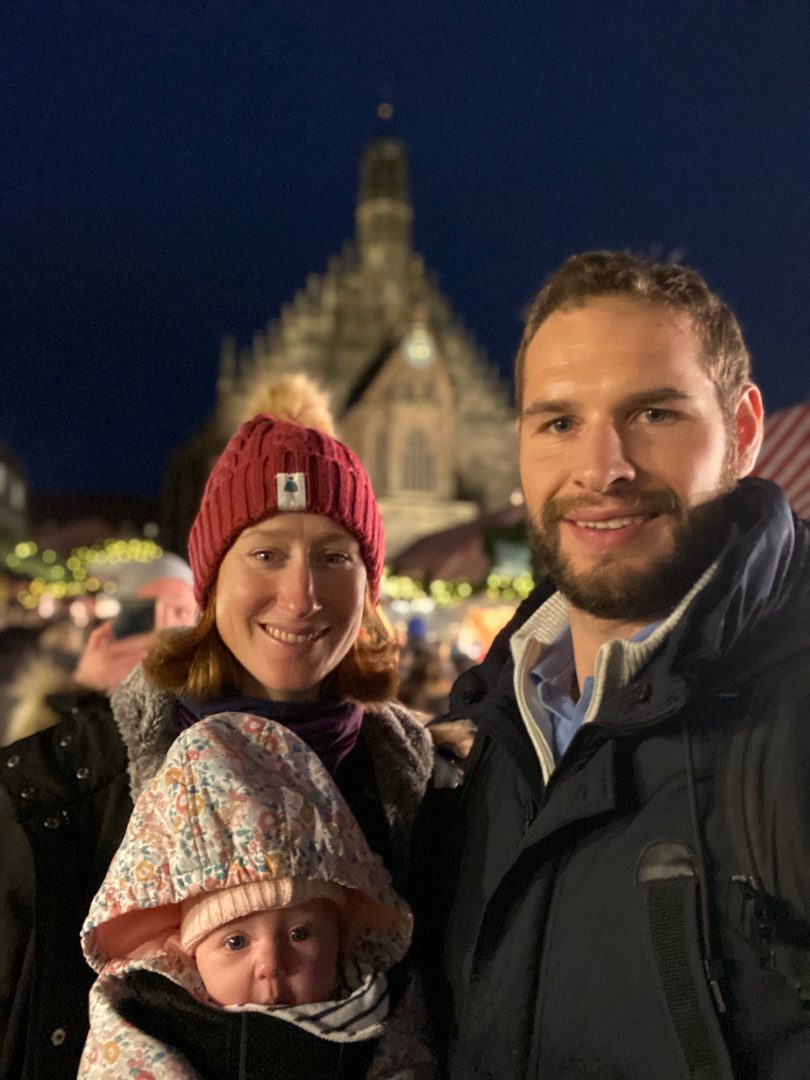 Sarah Cook was 15 years of age and a student at St Clare’s College in Canberra when she was identified as a potential Olympic rower despite never having rowed before.

Often when teenagers are involved in a range of sporting activities, and their talent is identified for a sport such as rowing, there is some hesitancy given the potential upheaval in their lives.

“I wasn’t doing anything specifically with sport,” she said. “I said to mum I wanted to go to the Olympics after seeing the opening ceremony for the 1992 Games on television.”

And with that motivation, Sarah began to learn to row on Lake Burley Griffin.

She went on to compete at two Olympics, in the pair with future Olympic gold medallist Kim Crow (now Kim Brennan) in 2008, and she was a member of the Australian women’s eight, known as the ‘Motley Crew’, which competed at the 2012 London Olympics.

They were known as the ‘Motley Crew’ because they had to fight their own national body for support to qualify for the 2012 Olympics.

History shows the crew won that battle and qualified for the Games at the final qualification regatta. 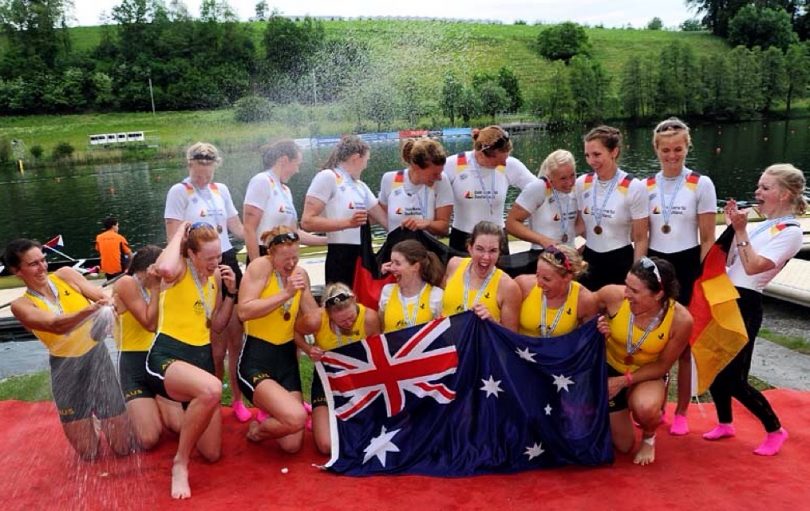 The Motley Crew when they won and qualified for the London Olympics at the final Olympic qualification regatta in 2012. Photo: Supplied.

Now 20 years on from being talent identified at school, Sarah has returned to Canberra as the head coach of Canberra Grammar’s rowing program.

But her journey from champion rower to the present day has been far from conventional. As I discovered, Sarah is the ultimate multi-tasker, capable of achieving at a high level across a range of activities.

After the London Olympics Sarah retired from rowing and set her sights on becoming an Olympic sailor, despite never having sat in a dinghy.

Five months after leaving rowing, Sarah and her sailing partner, Beijing Olympic Gold Medallist Elise Rechichi, won the national title in the 470 Class in just their third regatta together. They finished eighth at the 2013 World Titles. Their success as a crew surprised many in the sport.

Rechichi took time out from sailing to have her first child, and Sarah was searching for a new boat. She ended up teaming with Haylee Outteridge in the 49er FX Class. 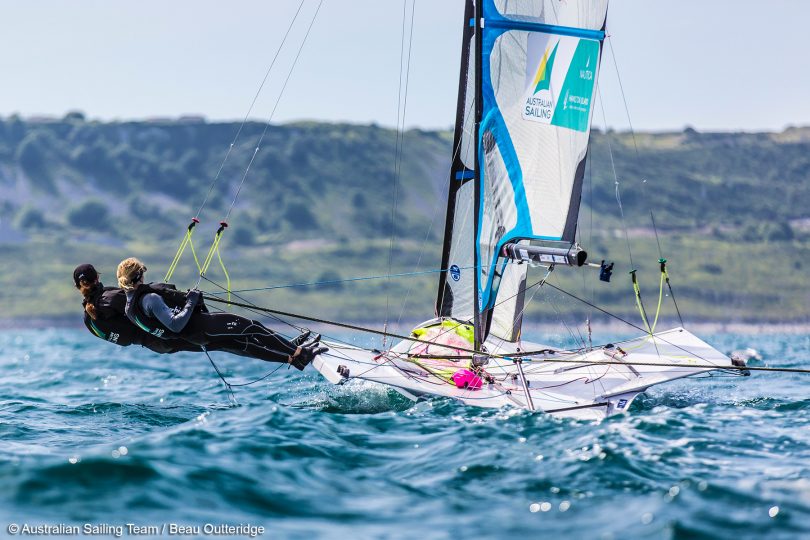 After rowing, Sarah took up sailing and was part of the national sailing team for three years. Photo: Beau Outteridge.

Sarah retired from sailing after three years in the national sailing team, bringing to an end a career in elite sport spanning 15 years.

Sarah says she enjoyed her teaching degree more than she thought she would. As she reflects: “it gave me balance.”

As she steered her way through sailing, Sarah was also making a name for herself as a rowing coach.

Under Sarah’s coaching, St Joseph’s College in Sydney won the GPS Head of the River in the eights for the first time in 42 years. She was the first female head coach in the history of GPS rowing.

Prior to Sarah taking on the role of Head of Rowing at Joey’s, Bob Shirlaw, the 1968 Olympic silver medallist from the Australian men’s eight, was at the helm. He mentored Sarah before she took over the role in mid-2015. His influence and experience, teamed with the ongoing support from the school, helped establish Sarah in the head coaching role.

Sarah remembers the impact of her success at the time: “There was a mixed reaction from the Old Boys. Winning the Head of the River changed their perception and the support I received from the school was fantastic.” 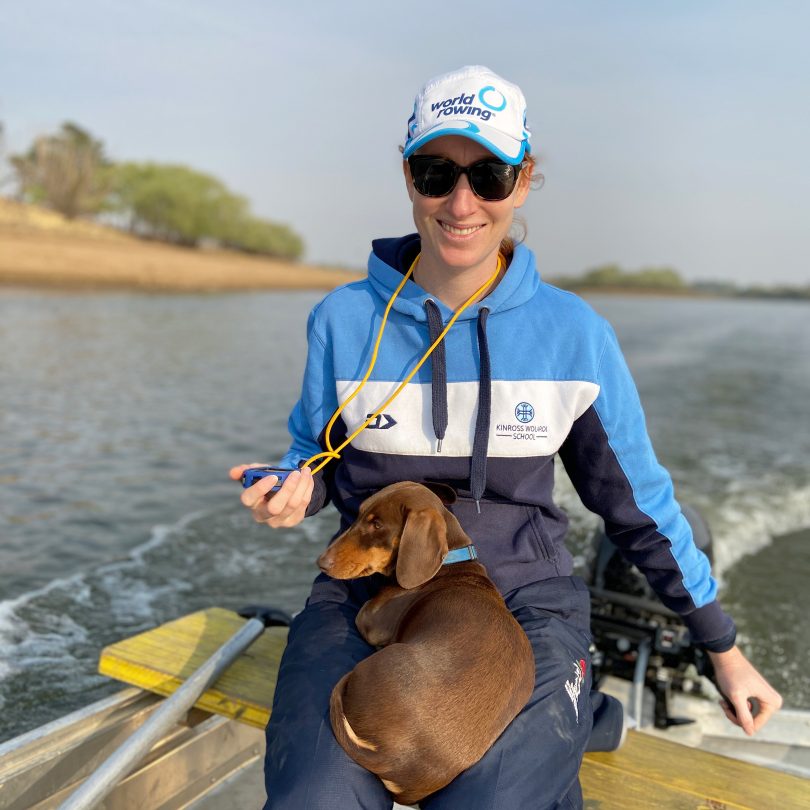 By 2018 Sarah had moved to Orange to take on a role at Kinross Wolaroi School as the head rowing coach with her husband, New Zealand under 23s World Champion Tobi Wehr-Candler.

Together they developed the school into a national powerhouse, becoming the third ranked school at the Australian Rowing Championships.

They have now set their sights on lifting Canberra Grammar to similar heights. With Tobi appointed as the head of rowing and Sarah as the head coach.

“We loved our time in Orange,” says Sarah, “but the opportunity came along to return to Canberra, and we love the lifestyle here.”

Tobi and Sarah have a one-year-old daughter, Astrid, so the Grammar offer presented a chance to be closer to her extended family.

Together, Tobi and Sarah are a formidable combination.

“Head coaches are notoriously demanding but Tobi and I get along really well. We are similar in many ways. We have a strong desire to get the ACT onto the national stage. I’d like to see it get back to where it was a number of years ago.”

For Sarah, who taught science at Kinross while also undertaking the duties of rowing coach, there is the opportunity to continue teaching at Canberra Grammar.

But there are more multiple layers to this story.

Sarah is also one of the world’s leading rowing commentators, having commentated at world cups, world championships and Henley Royal Regatta. 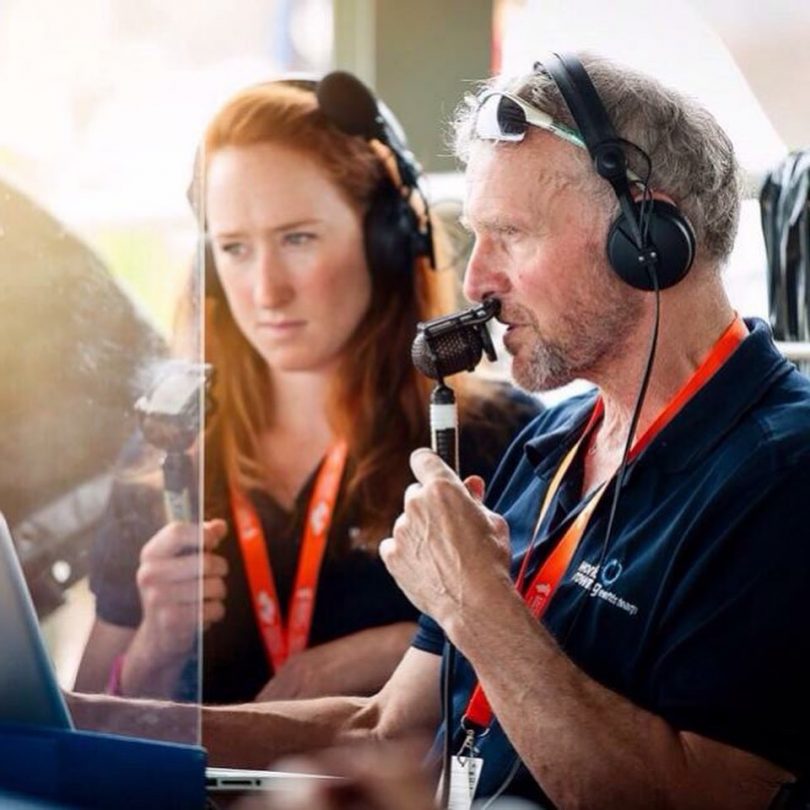 She is a Henley Royal Regatta steward; the first international female to be elected to the lifetime position.

Sarah is also on the boards of Rowing Australia and Baseball Australia, President of Sydney University Rowing Club, a member of the National Sports Tribunal, and Chair of the Coastal Rowing Group. There’s a push for coastal rowing to be in the Olympic program at the Paris Olympics.

So far it has been one crowded life of achievement after achievement but foremost in her mind at the moment is to encourage people of all ages to get into rowing.

“We have a holistic approach to the programs Tobi and I will be running. We want everyone to enjoy the sport and achieve their goals as well as fostering greater participation.”

We need more people like Sarah in Canberra sport, but we could be waiting a while given her unique achievements across a wide range of activities. 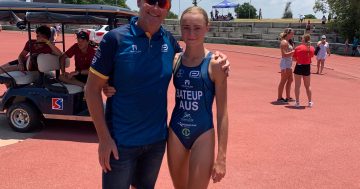