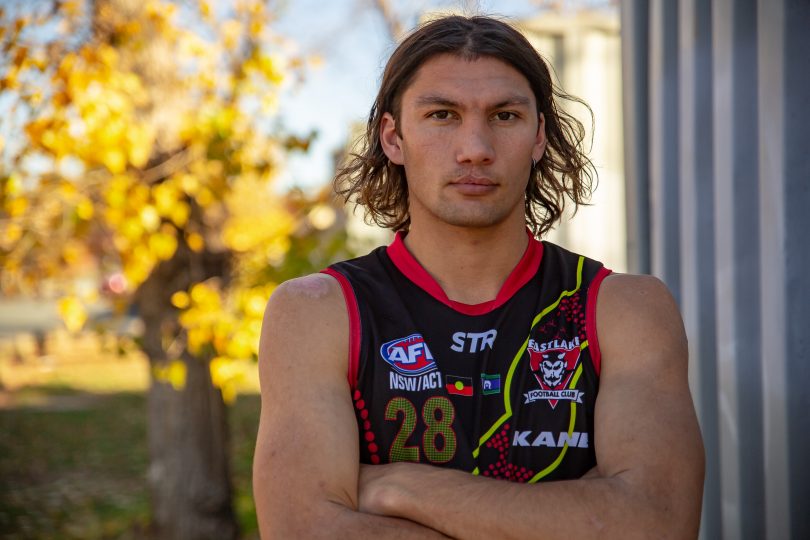 Liam Lupton credits his grandmother for igniting his interest in learning more about his Indigenous heritage. Photos: George Tsotsos.

It wasn’t until he made the ACT’s Indigenous representative team as a teenager that Liam Lupton’s curiosity about his heritage began to bubble beneath the surface.

The Eastlake Demons midfielder and proud Bundjalung man was always aware of his Indigenous background but never fully knew his family’s history. So he turned to the woman he knew would know all about his history – his grandmother.

Now the 19-year-old will honour his heritage on the field when Eastlake wears an Indigenous jersey designed by himself against the Tuggeranong Hawks on Saturday afternoon (25 May).

“I played in an Indigenous Aussie Rules competition called Jack Atkinson Memorial Carnival which was held in Wagga when I was just a kid,” Lupton recalls. “I was just 15 years old and I was running around with the men.

“That was when I first wanted to learn a little bit more about my culture and my people. My mob is from Bundjalung country so we originated from the Lismore area. That is there where my Nan, who is full-blooded, was born before she moved down to Canberra.

“I didn’t know too much about her story to be honest and why she moved here but two weeks ago we sat down and looked at our family history together and looking at our family tree.”

Ever since he was a year nine student, Lupton had an eye for jersey designs. Inspired by the Indigenous jerseys designed by AFL clubs, he would design his own during art class but it was his good mate and ex-teammate Tim Hodge who inspired him to create one for his club. 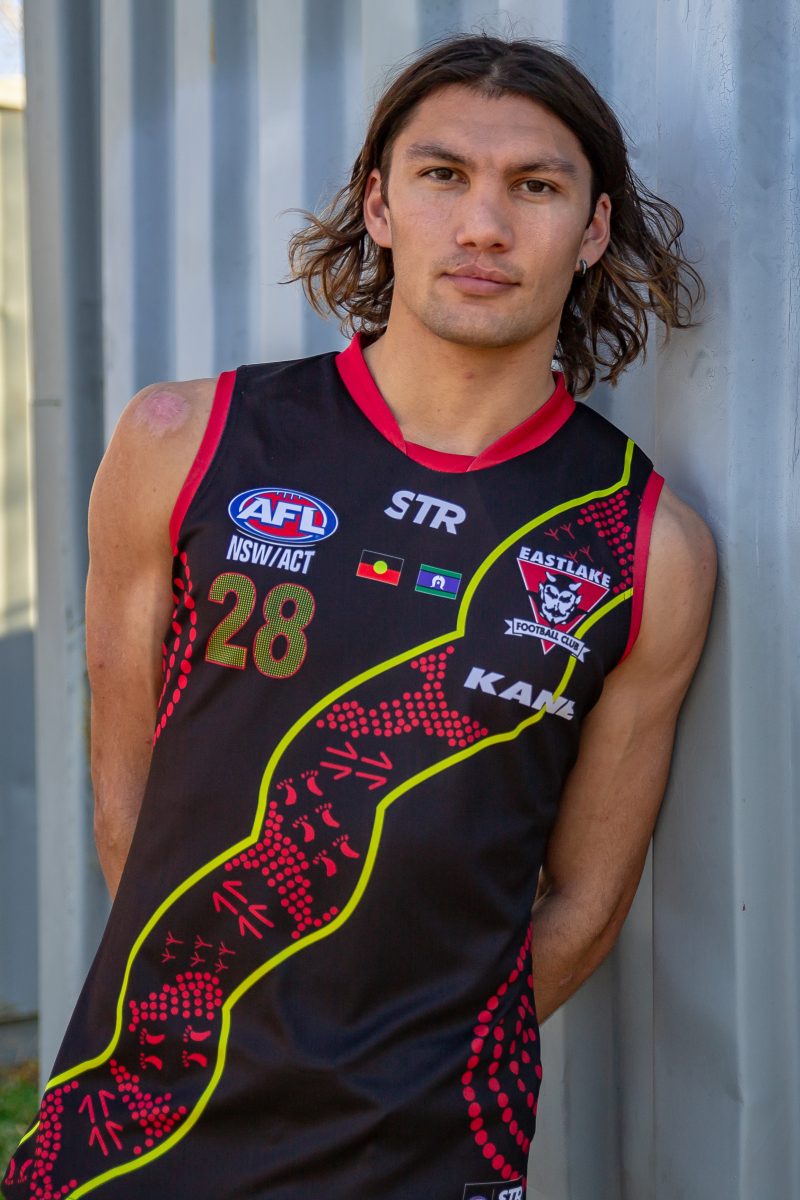 The jersey celebrates the Ngunnawal and Ngambri people.

“So it is fitting that we play Tuggeranong Hawks this weekend.”

Born and raised in Canberra, Lupton said he wanted to give his design a hometown story to recognise the beautiful iconic water feature that was once the main source of life for the Traditional owners of this land, the Ngunnawal and Ngambri people.

“The Molonglo River runs through the land that our football club now looks over so I thought I would incorporate the Eastlake slash and use it as the river,” he shared.

“The yellow outlines the river flowing across the slash of the jersey and the fine red shows the rocks which would have featured in the Molonglo River. I have also incorporated small groups surrounding the river as a place where Traditional elders may have come together.” 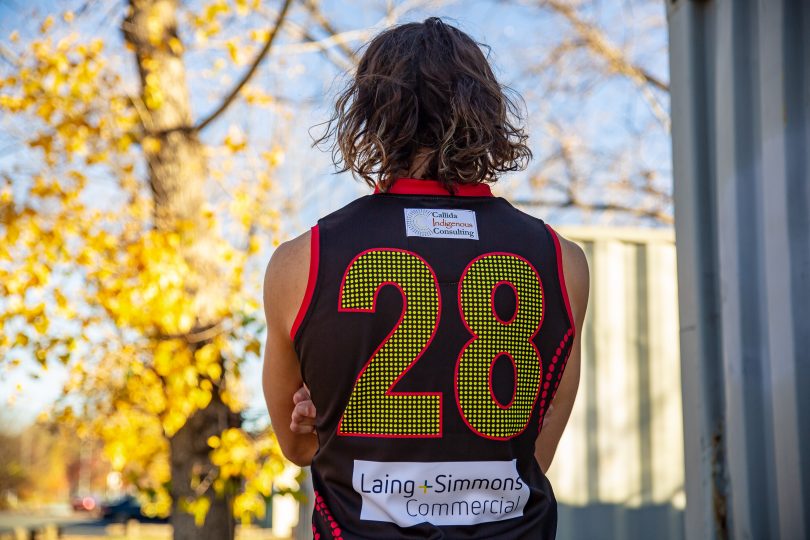 Lupton was inspired by the AFL’s Indigenous jersey designs.

This Saturday will be a special moment for Lupton, with a Welcome to Country and special smoking ceremony to take place before the first bounce. He hopes his jersey design will inspire more clubs to follow in his club’s footsteps.

“The initiative shown by AFL Canberra to recognise Indigenous culture is awesome,” he said.

“It is pretty special to hear that Hawks vs Demons will be an annual event on the Indigenous Round. I remember the ceremony last year and it gave me goosebumps and made me really excited to see where this is all heading.

“I hope the round inspires other clubs with ideas on designing jerseys and make it a full week of recognising our first people.”

Daniel Duncan - 3 minutes ago
we are not out yet stop the fake news. View
Darcy Ryan - 4 hours ago
The only thing that kept people going during the lockdown was the federal government payments. View
Lifestyle 23

Simone Moss - 5 minutes ago
Sarah Moss,maybe you need some alpacas 🦙 View
Lucy Coote - 1 hour ago
Tom Gilbert uhhhhh I mean at least we wouldn’t have to mow the grass… View
Amanda Robyn - 1 hour ago
Suzanne Feeney. See. Alpacas is what you need. 😉 View
Sport 5

Peter Ball - 4 hours ago
Gai Wil - So given that logic, a 5 kmh limit would be OK with you yeah? I mean, as you stated if you don’t speed (regardles... View
Peter Ball - 4 hours ago
At least I feel safer now, when crossing the road while updating my FB profile. 😜 Before the new limits, it was like Russi... View
Greg Myat - 5 hours ago
Oh damn! Can’t speed there now because of a pesky camera! 🧐 View
News 2

@The_RiotACT @The_RiotACT
Sally Hopman reckons there's no need to #write yourself off if you are struggling with #computers. Just pick up the heaviest thing handy - ancient Remington #typewriters are always good - and take aim at the laptop https://t.co/5SoyRLLAhU (21 minutes ago)