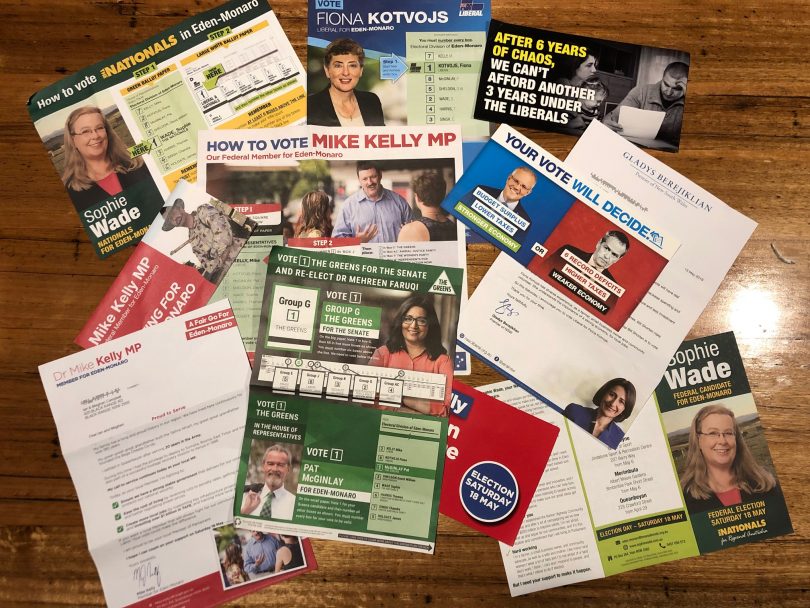 Election results in Southern NSW stand in contrast to the national trend with two of the three electorates Region Media endeavours to serve retaining or turning to Bill Shorten’s Labor Party.

Scott Morrison and the Liberal-National Coalition are just shy of the 76 seat target. Liberal Angus Talyor in the Goulburn based electorate of Hume is part of that count claiming an unshakeable 62.7% vote, a positive swing of 2.6% on his 2016 result. Labor’s Aoife Champion picking up 37.3% – two-party preferred. The Greens and United Australia Party finished even on 4.7% on first preferences.

LIVE with election results from Eden Monaro, Gilmore and Hume. Your thoughts are welcome.

Hume voters were seemingly unphased by the drama surrounding Mr Taylor in the run-up to election day, including speculation around water sales, Cayman Island bank accounts, and talk of favours for Oxford rowing mates. Despite all that, Angus Taylor and the Liberal Party have been returned for a third term in Hume.

East of the escapement though, the pendulum swung towards Labor, with Labor’s Fiona Phillips winning Gilmore after six years of grassroots campaigning.

What was seen as one of the most marginal seats in Australia has been won with a 4.3% swing to Labor, Ms Phillips going to bed having secured 53.5% of the two-party-preferred vote.

The Prime Minister’s pick, Warren Mundine tanked, with the Liberal primary vote diving by 17.3%, most of that flowing to The Nationals Katrina Hodgkinson, who won 12.5% of the vote.

Gilmore might be Labor’s only gain in the election, and while Ms Phillips can take much of the credit for the win, local Liberal Party dysfunction has surely played a part. Loyal Liberals like the immediate two previous members – Jo Gash and Ann Sudmalis pulled on the green and gold of The Nationals and campaigned for Ms Hodgkinson.

In his victory speech, Scott Morrison singled out Warren Mundine, perhaps the PM hopes Mr Mundine will contest the seat again and spend the next three years building the local support and base that was missing this time around.

Seeing out a swing against Labor of 1.9%, Mike Kelly won 51% of the vote after preferences, Fiona Kotvojs waving the flag for the Liberals finished with 49%.

Pat McGinlay of The Greens can take solace from a 2.2% swing to his parties agenda finishing with 9.8%, while Sophie Wade of The Nationals lead a warm and engaging local campaign to win 6.7% of the vote.

Ms Kotvojs was a smart campaigner with a feel for the long game, voters should expect to see her name on a ballot paper again.

But it is Mike Kelly and his progressive agenda on climate change, and tax reform leading to health and education spin-offs that local voters identified with.

Clearly, Gilmore voters identified with the same values and priorities, perhaps those voters are consoled with the victory of Zali Steggall in Warringah over former Prime Minister Tony Abbott, a winning margin of over 15%.

While Ms Steggal was gracious in her victory and acknowledgment of Mr Abbott’s service, she was clear and strong in her determination on climate action.

“Warringah has definitely voted for the future,” she said.

“We have a new beginning for our environment. I will be a climate leader for you.”

Bill Shorten won’t re-contest the Labor leadership when the vote is called, Mr Kelly and Ms Phillips will play their part in deciding who will take the party forward, no doubt they’ll be looking for someone who ‘clicks’ with people the way Mr Shorten never did.

Angus Taylor is expected to roll on as Minister for Energy in the Morrison Government, having a hand in the development of Snowy 2.0. His grandfather, Sir William Hudson was chief engineer and commissioner of the original Snowy Scheme.

Dianne Stratford but this is about money for the horse racing industry. We don't need to prop up the… View