Significant investment is being poured into Snug Cove to cater for boats of all sizes. Photo: Visit Eden

Another jewel has been added to Eden’s increasingly sparkling crown with the NSW Government providing an additional $9 million in funding to construct a wave attenuator in Snug Cove.

The extra funds come on top of $10 million announced in 2014 for the Eden Safe Harbour Project and will allow for the government’s preferred option to be constructed, a total cost of $19 million.

“In November 2017, we called for expressions of interest for both floating and fixed panel wave attenuator options,” Member for Bega, Andrew Constance says.

“The Government carefully reviewed applications and decided that a fixed panel wave attenuator will provide the best wave climate and the safest possible harbour for local and visiting vessels.

“Eden port can be exposed to significant wind and wave conditions which can affect maritime safety and increase the risk of damage to vessels moored in Snug Cove.

“The wave attenuator will calm wave activity in the cove providing a safe harbour for local and visiting vessels as well as improve the protection of existing maritime infrastructure,” Mr Constance says. 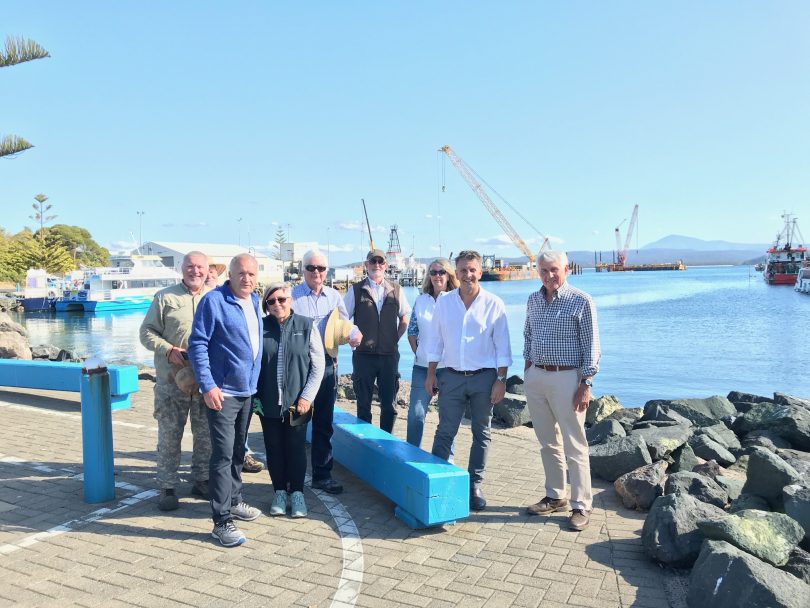 The issue has been that Snug Cove is seen as an unsafe port for small vessels because of its exposure to south-westerly gales.

The local group who has been advocating for the attenuator since 2010 says vessels are damaged in the port every year, limiting the potential of Snug Cove being a major small boat hub and in turn onshore economic development.

“A safe harbour in Snug Cove will provide a huge boost for the key economic drivers of tourism and boating in South East NSW. These have a major impact on jobs, investment and the overall prosperity in the region.

“The attenuator announcement paves the way for the development of a 170 berth commercial marina.

“The overall marine and harbour precinct development plans for Snug Cove are magnificent. A first-rate cruise ship terminal, a large marina, and a vibrant tourism hub, whilst still maintaining the traditional commercial fishing, charter and whale watching which have attracted so many tourists in the past,” Mr Bain says.

Eden is a busy place at the moment, the town’s famous fishing vessels are currently sharing their space with heavy machinery as the Eden Breakwater Wharf Extension grinds on.

Around 80 per cent of the wharf piles have so far been driven into the seabed of Snug Cove to create the foundations for the new wharf extension. In addition, Waterways Construction have completed 60 per cent of the onshore bollard piles, while work is also underway on the piling works for the mooring and berthing dolphins.

The wharf extension is due to be completed in mid-2019 at which point the ever increasing number of passenger cruise ships visiting Eden will be able to pull up alongside rather than drop anchor in Twofold Bay and rely on tenders to get those ‘wallets’ ashore.

It’s anticipated that construction of the fixed panel wave attenuator will start in early 2019 and run for 12 months. The NSW Department of Industry has been working with Waterway Constructions in finalising the design and construction contract.

When complete, the wave attenuator will be 366 metres in length, starting its run 55 metres from the end of the multipurpose jetty and extending into Snug Cove towards Cattle Bay.

“The Snug Cove Harbour will be a major attraction for anyone planning fishing, sailing or just coastal cruising during their holiday, in retirement or just as part of their day in this great place to live,” Mr Bain says.

“Eden is the only deepwater port between Sydney and Melbourne, boaties don’t have the added complication of navigating a tricky bar crossing.” 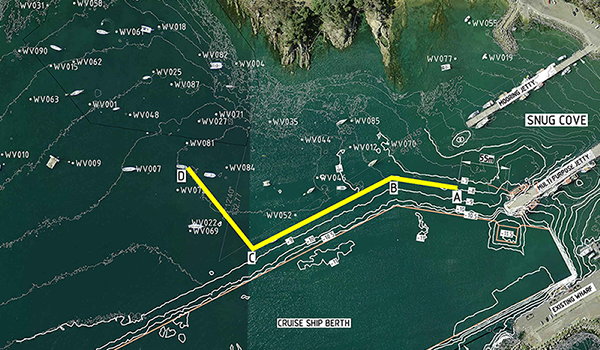 The proposed location of the 366m wave attenuator. Photo: NSW Dept of Industry.

Now that funding for the attenuator has been secured, POEM’s next priority is investment in the 170 berth commercial marina which will sit to the north of the shelter.

The land and waters earmarked are owned by the Crown and Mr Bain is hopeful the NSW Government will kick-start the vision now that the style of attenuator needed has been decided.

“There are a number of different funding models the government could use, what they have done at Bermagui and Batemans Bay already are good examples,” he says.

“The government has plans to do up the whole wharf precinct and hopefully we’ll be a part of that.”

Juz Hawke - 25 minutes ago
OMG Kylie Green it's happening again 🙄 View
Juz Hawke - 29 minutes ago
Jason O'brien okay thanks for the feedback on my opinion 👍🏻 I just liked the way the article was written. View
Oscar Mike - 35 minutes ago
If you look at the data you would be not taking the experimental gene therapy. The conspiring occurred last decade, now they... View
News 2

Tom Worthington - 32 minutes ago
ANU, University of Canberra, and other Australian unis, now offer a large number of undergraduate and postgraduate certificat... View
Tom Worthington - 2 hours ago
Vocational institutions also provide a way to get a qualification with a minimum of study. The staff at CIT helped me documen... View
News 26

Sue Thurley - 1 hour ago
Love driving up the Hume thru the Cullerin range. They are awesome... View
News 44

astro2 - 2 hours ago
Hi Chewy, a few things need clarifying here; I'll try to be brief as I think this topic has gone 'off track' from the origina... View
chewy14 - 3 hours ago
Astro, That's a gross misrepresentation. "Current R4 doesn’t have this." How exactly will those redirects benefit? The ligh... View
News 2

Nathan Worrell - 2 hours ago
I'm not surprised, Griffith and Narrabundah have house construction work going on all over the place and every time I take my... View
Gassed - 3 hours ago
This is the result of the cowboy section of the construction industry opening up. View
Business 25

Brydie Kelly - 4 hours ago
Jackie Fuller I've been to many a birthday party and had my 30th there. It was always a warm and welcoming environment. View
Alicia Conley - 6 hours ago
If they try put a maccas or KFC there I'll be protesting View
Jackie Fuller - 6 hours ago
Been living in Chisholm for 11 years..... as a young family we would never step foot in the tavern, never felt safe to do so!... View
Business 5

@The_RiotACT @The_RiotACT
Lawyers for Peter James Loeschnauer, who is charged over a crash that killed ice hockey star Lachlan Seary, have made representations that will be discussed with the @CBRBrave player's family https://t.co/n14bVYRm22 (1 hour ago)