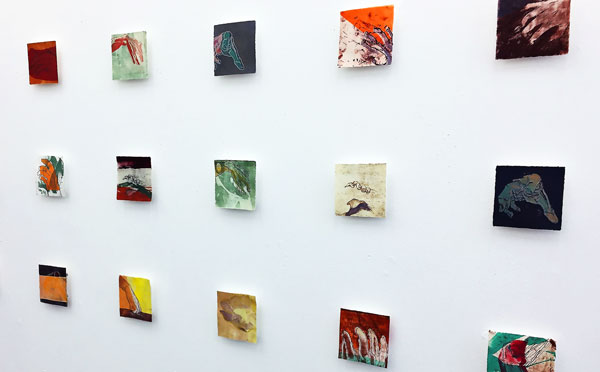 Fresh from winning an Emerging Artist Support Scheme award for her work in the ANU School of Art & Design 2017 Graduate Exhibition, printmaker Kira Godoroja-Prieckaerts is preparing for her solo show at Belconnen Arts Centre, Public Moments. We chatted with her about the haunting and unimaginably personal creative process behind her exhibition.

Your exhibition deals with the sexual harassment of women, an issue that has recently become more prominent due to the multiple accusations levelled against such high profile men as Harvey Weinstein. What drew you to this topic?

Though we can argue that these people run in circles far removed from the everyday, we cannot deny their influence on our lives. Those who trivialise the harassment do so in hopes of maintaining the standards set by these men. From age 12, I was stared at, followed, accosted for drinks, and grabbed by acquaintances and strangers alike. It wasn’t until years later, when I sought out works by women expressing their own experiences of harassment, that I fully understood the universality of my ordeals. Their systemic nature allowed me to remove blame from myself and stop questioning my involvement in their occurrence. The stories these women shared opened my world, and ultimately I shared mine so that my experiences can offer reassurance to those who feel isolated.

How do you feel about the current social discourse surrounding sexual harassment, and how does your work contribute to it?

Cautiously optimistic. At the end of 2017, the wave of harassment claims was disgusting, but the wave of support and belief was inspiring. Of course, these behaviours are still rampant and there is a lot of backlash against those who speak against their harassers, but the step forward must be appreciated. I can only hope that my work continues this discourse. Art reflects the reality it is created in – the truth as felt by the artist. Because of this, works of art will always say many things, both intended and unintended. The ultimate goal is to start a conversation. For some, it will be a beacon of understanding; others may question their own behaviour and that of those around them, or begin to ask the women in their life about their own experiences.

Have you experienced any backlash due to the content of your work?

I was confronted with scepticism; mostly, people questioned if such things happened, or if it was a common occurrence. I was questioned about the validity of my experiences. While belittling, these situations just fuelled the fire and confirmed the necessity of discussing this topic.

What themes would you like to explore in your work going forward?

Pelvic pain is certainly an area I’m currently looking into. It has been, and still is, an issue that affects so many of the women in my life. It’s also a topic that is not discussed openly. This shroud of secrecy can prolong the time women take to seek treatment and hinders diagnosis.

Do you consider yourself a feminist?

Yes, I am a feminist, because I believe in equality. I know that the debate is far greater than that, but it all starts with that belief. Those who gain power from systems of division will always fear a loss of it, claiming it is best to fight against those with less, rather than question those who are hoarding more. Feminism questions this, it directs me to ask more of myself and those I choose to support. It is not a faultless ideology, nor should it be a stagnant one. As we better ourselves and our understandings, it should also be bettered. This is the kind of feminism I see around me and the kind I hope to see more of in the future.

Public Moments opens at 5:30 pm on Friday 16 February. Free drinks and nibbles will be provided, and all are welcome. You can see more of Kira’s work on Instagram.

Is it the role of artists to engage with controversial and taboo topics? Let us know your thoughts in the comments section below.

If you’re an artist, this is how to get help navigating the sector shutdown

Braidwood artist in Bondi’s famous ‘Sculpture by the Sea’