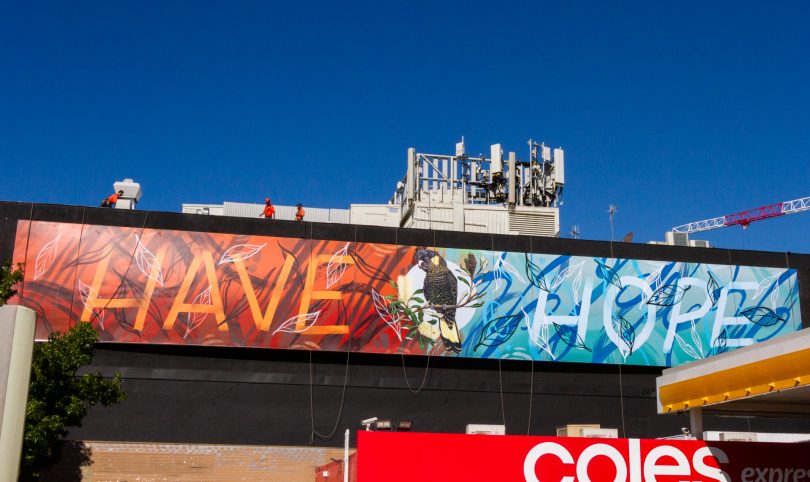 After a year in the making, Manuka’s mural with a climate change message was unveiled this week.

Featuring the endangered yellow-tailed black cockatoo beside the words “Have Hope”, the mural graces a high part of the wall of Endeavour House.

The design was selected as part of Ethical Property’s competition to support local artists and inspire them to create art to represent social issues.

Canberra mural artist James Small, 26, won the competition from more than 20 other entries with his mural inspired by climate change.

James said it felt amazing to see his mural printed on a banner and hung.

“It has been quite a process,” he said. “There’s been a couple of delays to finally getting it up there, but it’s been pretty special.

“It’s a really nice and humbling reminder that my design was chosen and it was really exciting to finally see it there.”

James has had murals on display all around Canberra and Australia, however this was his first printed on a banner.

He said the artwork aimed to demonstrate the negative and positive potential impact of climate action.

“On the left side there is that kind of more smoky, burnt out negative impact of climate change and on the right side it is a little bit more optimistic and positive with brighter skies, blue oceans,” James said. “Both sides kind of utilize an artistic range of brushstrokes and shapes to demonstrate that.

“I also included a yellow-tailed black cockatoo in the centre as I do a lot of illustrations and work around native animals and birds.”

James said it was symbolic as climate change had heavily impacted the species. 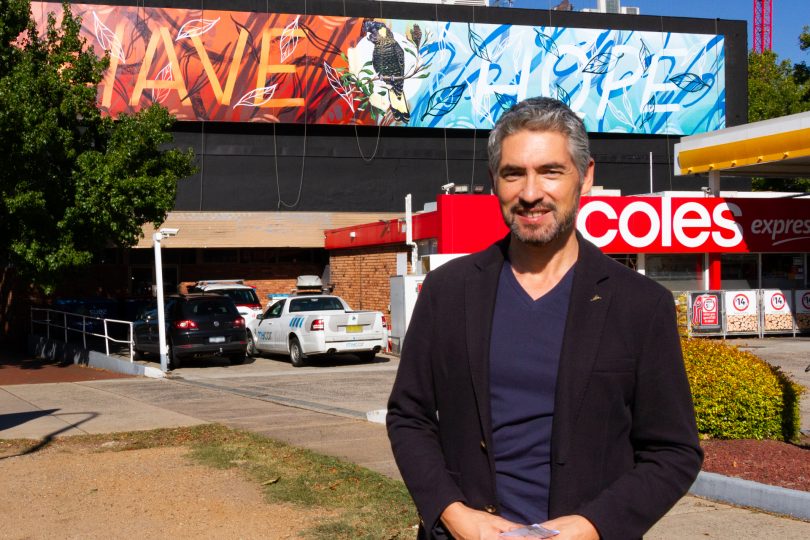 Ethical Property CEO Adam Trevaskus saw the mural for the first time when it was unveiled at the Endeavour House building. Photo: Evelyn Karatzas.

“At the moment the Australian community is really struggling, so we hope people take notice of the new mural,” Mr Trevaskus said.

“We hope over time this mural will become part of the identity of this local community and, because there are thousands of people that drive past here [Manuka] every day, it will become a bit of a landmark as well.

“The mural was voted for by the local community and we got over 15,000 votes for it to be selected because there’s a really strong feeling locally about climate change.”

Mr Trevaskus said the mural would be the first in a series, with each design to have a three-year lifespan.

Great mural and fantastic depiction of a yellow cockatoo. No doubt the reference to climate change is about their habitat being destroyed by the displacement of land with hectares and hectares of solar panels and maybe a few being wiped out by wind farms. Unless you believe that bushfires are a recent symptom of climate change. However the cockatoos have been coping with that ever since they existed. If so, maybe the only solution is nuclear. 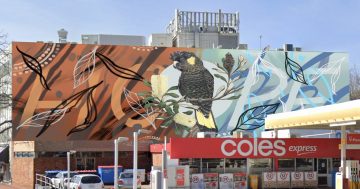