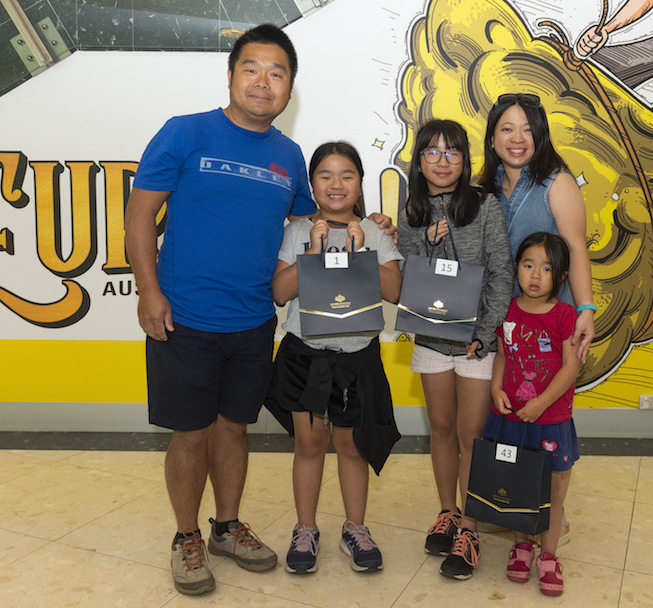 Caitlin Chee Fui and her family with the and father Pang, who won the last coin of 2019. Photo: Supplied.

The Royal Australian Mint welcomed in the 2020s by striking the first coins of the year.

The Mint’s CEO Ross MacDiarmid said the public saw international history made at the Mint on 1 January.

“As part of the Mint’s exciting annual tradition, the first 100 people lined up to strike the first coins of 2020 in the world,” Mr MacDiarmid said.

400 eager members of the public, including collectors and coin enthusiasts, waited hours to observe the unveiling of the Mint’s new theme for the 2020, titled Eureka! Australia’s Gold Rush.

“The Mint’s new theme for 2020 celebrates the contribution made to Australia’s development by new and growing communities during the gold rushes,” said Mr MacDiarmid.

“This is the third and final year of a three-year series of themes focused on colonial Australia, following the Mint’s 2019 theme The Bold, The Bad and The Ugly – Australia’s Wild Colonial Bushrangers and 2018’s Rascals and Ratbags – Australia’s Convict Era,” he said.

The newly released 2020 Gallery Press and Mintmark Suite coins are Australian legal tender and mark the discovery of gold in Australia, which helped to transform colonies into thriving cities, old penal settlements into places of shining opportunity and launched a rush towards federation.

Each coin’s packaging in 2020 Gallery Press and Mintmark Suite also includes captivating stories around the theme of the Australian Gold Rush.

The first person in line received the first coin from the coin press accompanied by a certificate number one, a mintmark and privy mark set as well as a silver proof version. The first 100 members of the public received a certificate authenticating their place in the line.

Futureproof - 17 hours ago
The roundabout at Monaro Highway/Isabella Drive is particularly dangerous with the height of the grass. You should be able to... View
Capital Retro - 18 hours ago
That would be tantamount to the cosseted cyclists in Canberra who get free bike tracks and then complain that they can't use... View
bigred - 19 hours ago
Of course, both sides of politics could encourage interested and motivated residents to "adopt a patch" and reduce the total... View
News 1

November 2021 is less than 5 mm off being Canberra's wettest November, and if rainfall levels are at the higher...

@the_riotact @The_RiotACT
Flynn's Wrecking Yard, near Cooma, has been a one-stop shop for #car restorers and repairers throughout #Australia, New Zealand and even the US for almost 70 years. But owner Wayne Flynn now wants to move on so the yard is up for sale https://t.co/2F1sGNJMxo (27 minutes ago)