Exploring the moon in cardboard, wood and old coffee cups 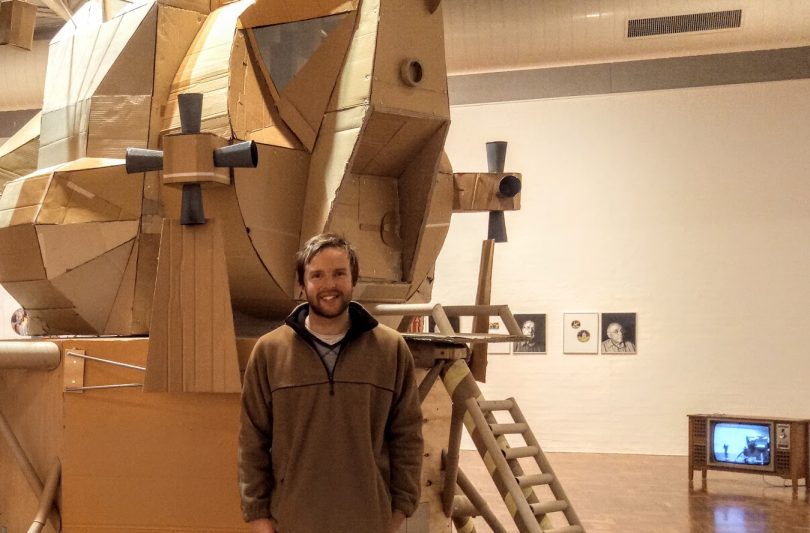 Tom Buckland with the lunar space module he made as part of the Promised the Moon exhibition. Photo: Cass Proudfoot.

“I built it in two weeks in my garage,” says Tom Buckland of his four-metre high lunar space module. “I had to build it in five pieces and assemble it in the gallery. It took five ute loads and a station wagon to get it here.”

The result is impressive. The lunar module made of cardboard, wood and coffee cups dominates the entrance to the art school gallery and sets the scene for the current exhibition Promised the Moon.

Lee Grant has contributed dramatic black and white portraits of Canberra’s space trackers, now into their 80s. Each tracker gazes skywards accompanied by an object of significance from their days working with NASA on the Apollo missions. 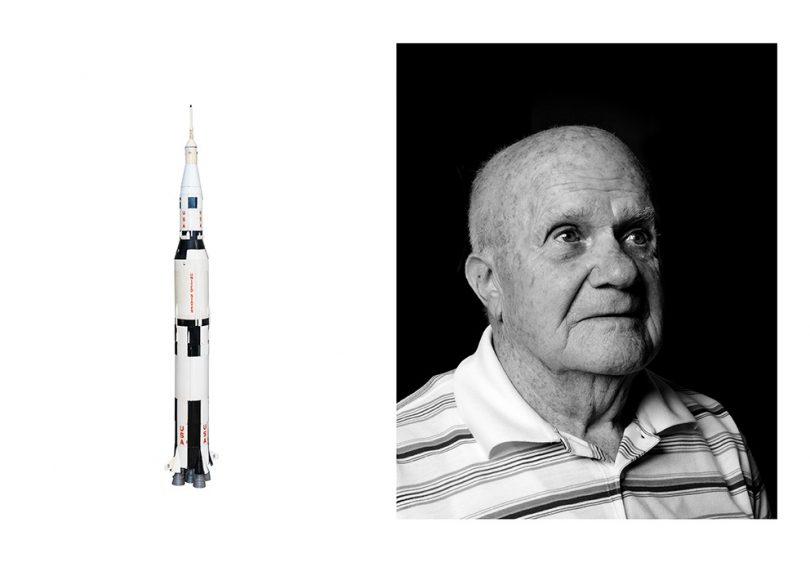 Other artists have reminisced about watching the moon landing as children, on grainy black and white TV screens, and created soft dreamlike prints and drawings. Some have explored the Canberra connection, incorporating images of the Honeysuckle Creek tracking station in Namadgi, built to support NASA’s Apollo space missions.

Heather Burness even went to the abandoned Honeysuckle Creek Tracking Station to start her prints. She left the steel print plates on site at the corners of the old concrete footings of the dish site. She found the site, now a campground, overtaken by nature in the form of insects, robins and wallabies, and unique marks have been formed on her print surfaces from their footprints, as well as rust, dust, rain and mist. She then used parabolic curves to imply the data-reflecting surfaces of the space tracking communication dishes used during the Apollo moon missions. 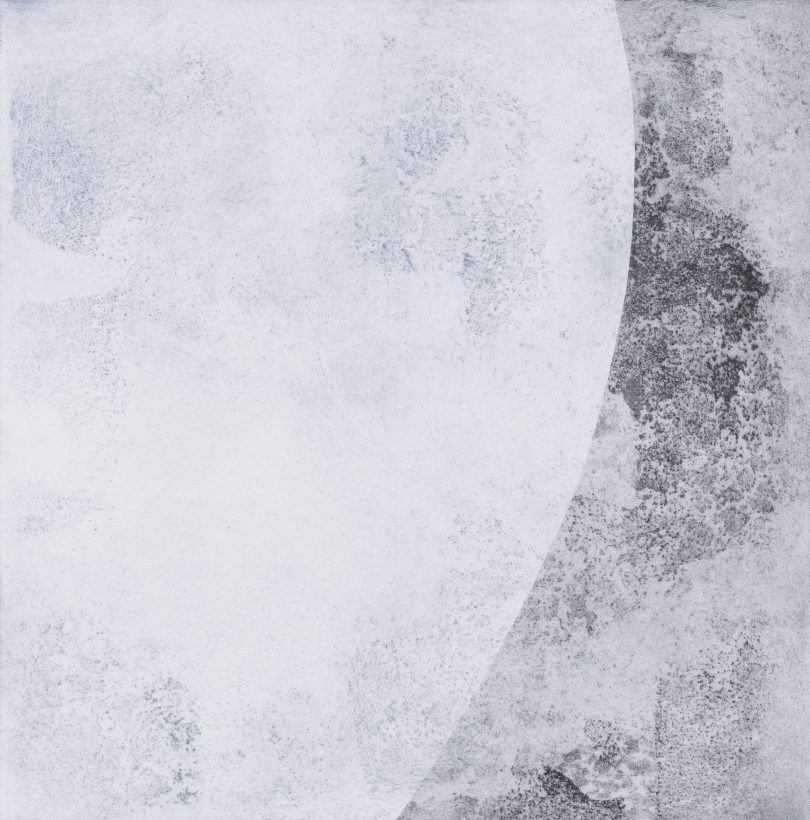 Erica Seccombe’s video work shows a constantly moving moonlike hollow shape. Incorporating a 1960s sci-fi style, she rendered it as an anaglyphic moving image that appears in 3D when viewed through red and blue coloured glasses.

The volcanic basalt rock she animated to resemble the moon was only 0.5 mm in diameter. Knowing this challenges perceptions of near and far and inspires the imagination. 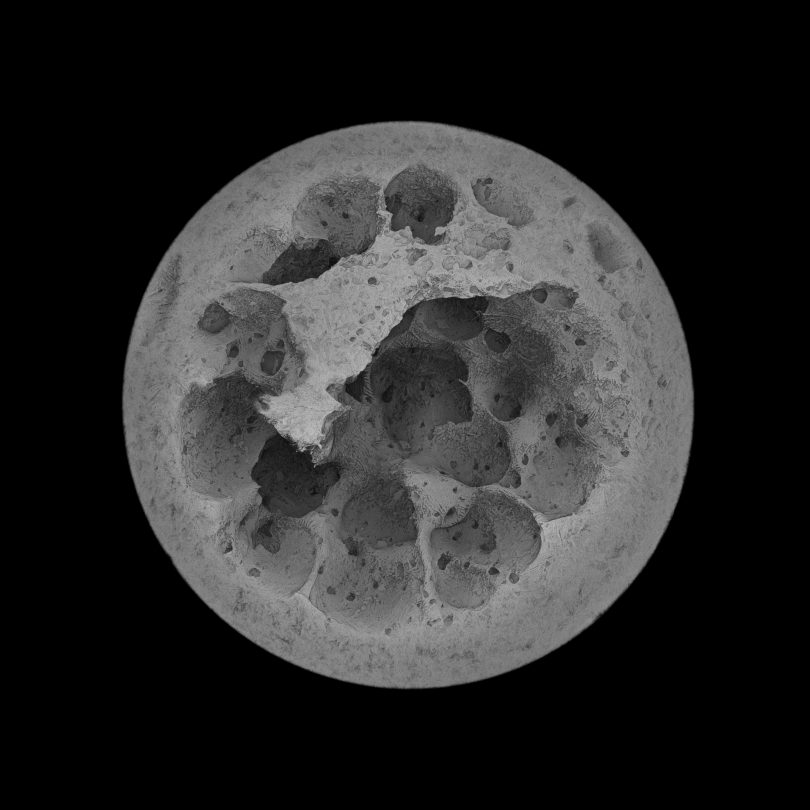 By Erica Seccombe: Celestial body: so near yet so far, video still from anaglyphic moving image. Photo: Supplied.

Several of the original Canberra trackers came to the exhibition opening and closely examined the lunar module creation.

“I was happy to see the old trackers looking at it,” says Tom Buckland. “They have such incredible technical knowledge and fascinating stories, it is wonderful talking to them.” 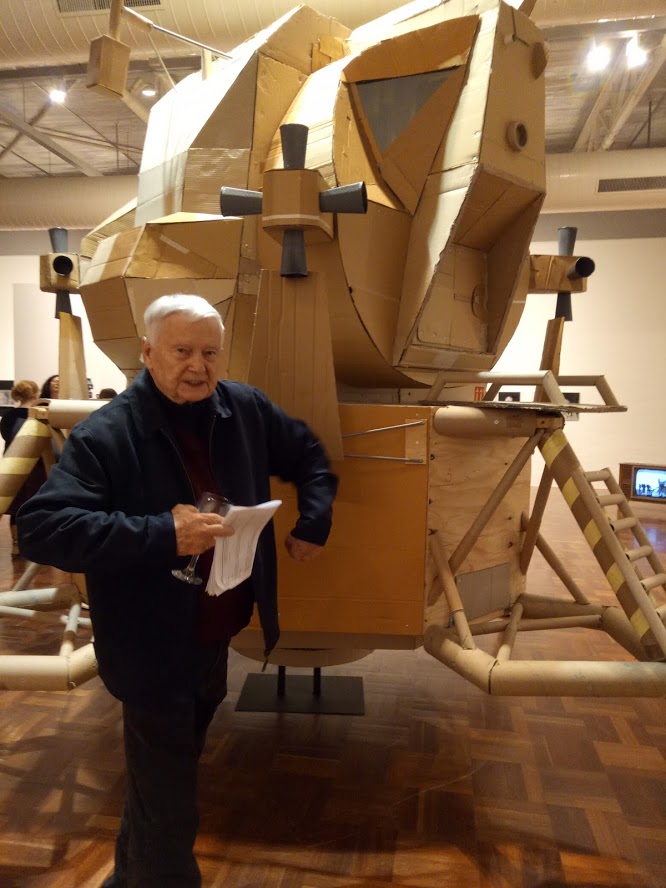 In a clever touch, the lunar module can be seen in his second work, ‘Canberra Living Room Fragment’ a 60s wooden TV set, broadcasting a black and white image of the lunar module across the room, as well as gallery visitors as they drift past. “It brings the viewers into the work, which is an added aspect,” says Buckland.

Text states ‘Live from the surface of the moon’ just as it did on screens at the tracking stations in 1969. “I found the TV two years ago at the Green shed, I always rescue wooden TVs if I see them,” Buckland explains. Some modern technology may have crept into this artwork, but the outside is pure 60s – right down to the plastic plate of iced vovos on top of the set, sitting neatly on a doily.

For more about the works in the exhibition and the importance of the artists in communicating and commemorating the ACT’s unique space heritage, curator Dr Ursula Frederick will speak in the main gallery on July 18 from 2-3 pm. This Promised the Moon curator talk is free, but RSVP is required.

Canberra School of Art and Design

The exhibition continues until Friday 26 July.

A_Cog - 4 hours ago
Should the ACT get its own police force? NO! It'd be run just as badly as every other ACT Govt service. Instead of buying ser... View
News 18

wildturkeycanoe - 6 hours ago
I'm still waiting for surgery, almost up to my "expected" 365 days on the Category 3 list. This is after initially waiting fo... View
HiddenDragon - 8 hours ago
This year's Annual Rates Assessment Notices tell ratepayers that 31% of rates payments go towards funding the health system -... View
Opinion 110

chewy14 - 6 hours ago
Russianafroman, I go from being called a right wing nut job to a Socialist Comrade in the space of a few stories these days.... View
russianafroman - 10 hours ago
Capital Retro I don't watch or listen to the ABC. But it wouldn't surprise me. View
Jose Black - 1 day ago
The ACT Greens have a major policy on supporting the community sector (including youth and mental health services) and giving... View
ACT Election 114

Reno Minopoli - 8 hours ago
Clinton Berry which part of "Three decades’ population growth "needed" do you not understand? Kids that grow up replace tho... View
Capital Retro - 9 hours ago
Well, I can't speak for everyone but I have certainly always "paid my own way". In the early days of SMSFs the deductibility... View
ssek - 9 hours ago
The greens and pretty good economic plan are an oxymoron. View
Property 1

Capital Retro - 10 hours ago
Coffs Harbour has The Big Banana, Tamworth has The Big Guitar, Canberra will have The Big Battery. View
News 47

Sarah Fox - 19 hours ago
Zalan Filip we will have to check it out! View
Zalan Filip - 1 day ago
Sarah Fox the one Soph was going on about... reminds me a bit of the huge market thing in Castlemaine. View
Angela Doyle - 1 day ago
Jacinta Elliott yes please! View
Property 35

Life as a Canberra space tracker in 1969

Artist on the Springboard presents ‘Gaze: The Useless Object,’ exploring beauty in the ordinary

@The_RiotACT @The_RiotACT
The Boat House is taking its offerings to the next level with the addition of an outdoor bar right on the shores of the lake https://t.co/rHkzcdz3kG (6 hours ago)