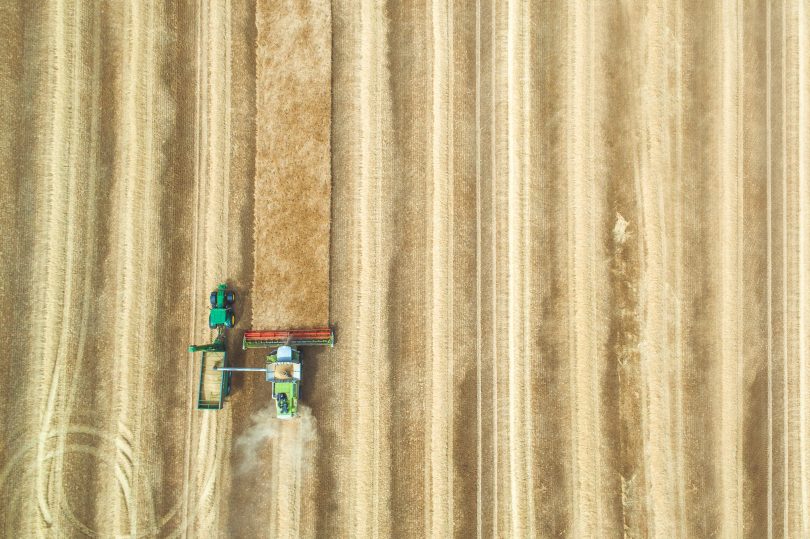 Bird’s eye view of a combine cutting through the final strip of wheat during harvest. Photo: Supplied.

Crop farmers are celebrating a bumper season in southeast NSW, but worry there won’t be enough workers during harvest.

Andrew Daley said he’s never seen so much growth during winter in his 14 years as an agronomist, covering from West Wyalong to Goulburn, down to Wagga Wagga and up to Cowra.

“We’ve had a mild winter with very few big frosts,” he said. “Some of the older generation are saying it’s the most growth they’ve ever seen and that it might be better than the break after the 1983 drought. We went from nothing on the ground to an unbelievable amount.”

The Australian Bureau of Agricultural and Resource Economics and Sciences (ABARES) estimates the 2020-2021 winter crop production in NSW will rise to 14.8 million tons, almost double the 10-year average to 2019-2020 and the largest since 2016-2017.

According to ABARES, it comes down to the above-average rainfall between March and August in nearly all winter cropping regions in NSW off the back of a poor harvest in 2019-2020 due to drought.

“We didn’t harvest a lot of last year’s crops, but if we have average rainfall between now and harvest, we will be looking at bumper yields,” said Mr Daley.

Spring rainfall is very likely to be above-average in all cropping regions in NSW, according to the Bureau of Meteorology’s rainfall outlook from September to November.

Currently, crop yields are fairly consistent across southeast NSW, although regions in the bottom half, such as Yass Valley, haven’t seen as much growth due to cooler temperatures, said Mr Daley.

Farmers are generally happy, especially with how well grain prices are holding up, but many are still holding their breath ahead of harvest.

“I think the biggest worry is the logistics at harvest – finding enough trucks and headers to get the crop off quickly,” said Mr Daley. “It’s going to be hard to do with the amount of grain there will be this year.”

While southeast NSW doesn’t rely on harvest contractors from Victoria as much as northern NSW does, the region lost many of its regular Queensland harvesters during the drought. They were replaced by local contractors, but Mr Daley said there still might not be the numbers needed to harvest the predicted bumper crop.

Just last week, National Cabinet adopted a National Agricultural Workers Code that will allow farmers to cross the borders between NSW, Victoria, South Australia, Northern Territory and the ACT during the COVID-19 pandemic.

The code recognises that agricultural work is often low density and outdoors where the risk of disease transmission is low.

“In the vast majority of cases, the closed borders are merely preventing farmers and workers who are from effectively COVID-19-free areas from conducting work in other COVID-19-free areas across state border lines,” said Federal Minister for Agriculture David Littleproud of the National Cabinet’s decision.

“With a bumper crop expected due to improved seasonal conditions, the decision could not have come at a better time for farmers and agribusinesses in NSW, Victoria, South Australia, Northern Territory and the ACT.”

GrainGrowers chairman Brett Hosking said the ‘hard’ border closure put in place by Queensland presented significant impacts for growers who are looking at one of the best seasons in several years.

He said there were examples of growers who had been denied travel permits that restricted their ability to travel from one property to another, with the postcodes used to determine permit eligibility being described as a “blunt instrument”.

steve2020 - 2 hours ago
It takes an appreciation of cultures to create a thriving arts community. Looking at the most culturally renowned cities, the... View
Property 9

Kate Louise - 4 hours ago
Rob Lillie we could be neighbours! View
Judy Gilchrist - 6 hours ago
Scott Firman This could be your plan for a knock down rebuild. Looks nice🤣🤣🤣... View
Sarah Tozer - 15 hours ago
Megan Moss an alternative View
ACT Election 9

Acton - 4 hours ago
In the Canberra Times today Rattenbury says he sees Covid as an opportunity to implement more Greens policies. He does not wa... View
thebadtouch - 22 hours ago
https://citynews.com.au/2020/trees-act-greens-throw-stones-at-themselves/ View
ACT Election 106

chewy14 - 6 hours ago
Capital Retro, Firstly, most of the interest rate cuts happened well before the current crisis, so you can't just claim your... View
Brenton Higgins - 7 hours ago
Joshua we’ve had two elections on that already. Canberra decided. View
Jayne Denise - 7 hours ago
Sean Bishop I am a reformed anti-tramer. Northborne is so good now with less cars and less buses. 👌Coincidentally, I work... View
Opinion 7

Acton - 7 hours ago
I know it's hard to change when one has been voting in the same party for 19 years but when the facts change, I change my opi... View
Acton - 7 hours ago
Being too religious and right wing, whatever that means, is a claim frequently made by Labor/Greens of the Liberals, but with... View
russianafroman - 13 hours ago
There is a large proportion of religious people in Canberra especially Christians. Why wouldn't the liberals try to appeal to... View
ACT Election 33

Stephen Esdaile - 18 hours ago
Can't vote Liberal, not voting Labor or Green. Looking at what the progressive are offering.... View
Frank Koch - 20 hours ago
Phillip Business Community well said View
Martin Miller - 23 hours ago
Charny Barney no 'whackadoodle ideas here . He's just plain arrogant to those who disagree with him. There is no real consult... View
Opinion 1

tonyd535 - 21 hours ago
Maybe a hospital first to take pressure off of the existing facilities. One for Gungahlin and another for Tuggeranong to take... View
News 58

Cherry harvest is a sweet one on the South West Slopes

Notes from the kitchen garden: harvest comes in but what should you be planting now?

Bemboka farming family ‘hops’ to it for harvest season

@The_RiotACT @The_RiotACT
Canberrans may be more passionate about corflutes than the election itself. Here are some of the top uses for the omnipresent signs which (technically) should all be gone 48 hours after the polls close on 17 October https://t.co/jmR6q4pcN5 (1 hour ago)

@The_RiotACT @The_RiotACT
Canberra's leading training institutions and employers have been recognised at the ACT Training Awards. @CommsatWork took out the ACT Large Employer of the Year award for the second year running https://t.co/m784tqDCo0 (2 hours ago)

@The_RiotACT @The_RiotACT
A new social enterprise by CIT students is turning coffee grounds and sawdust into compost enhancer, and providing employment for people with a disability https://t.co/e7eaBz01S8 (4 hours ago)