The RiotACT was invited to a four-course dessert degustation by Ali King, finalist on the Channel 7’s program Zumbo’s Just Desserts, to celebrate the opening of her new business. 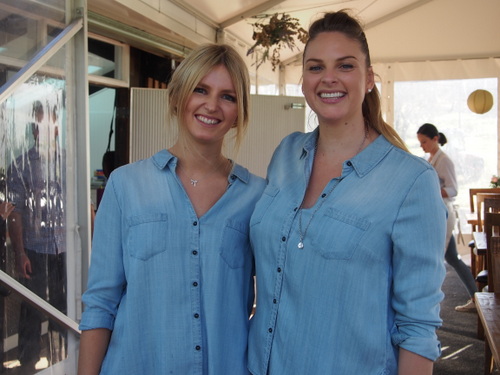 Ms King (above left) was the consistent high performer throughout the show, but narrowly lost by one point in the final bake-off. Building on that success, she is launching her own business with friend Emilie Rohan (above right): Ali King’s Desserts Cakes and Events. The business will cater for one-off events with local restaurants and venues – think high teas (look out for the first at Otis restaurant in Kingston later this month, with repeats at The Truffle Farm over summer), degustation menus and cocktails. Ms King’s dessert creations can also be requested for private functions such as dessert tables at weddings or bridal showers. 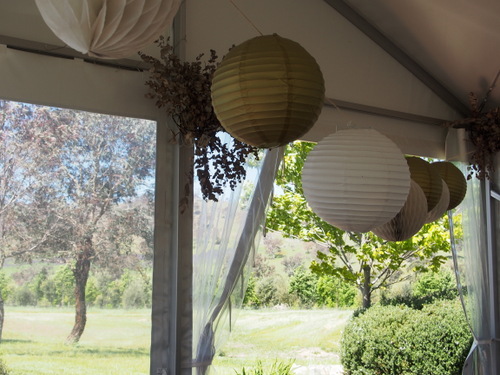 Marquee at the Truffle Farm

The event the RiotACT attended was hosted by Jason Mesman of The Truffle Farm in an elegant marquee on his property. I hadn’t been here before and enjoyed the relaxed, stylish setting; I could imagine celebrating a wedding or private event here and hope I am invited to one. Samson the famous truffle dog was lounging on a couch away from our crowd, but I heard from his owner that he is soon going to have a younger dog as company. 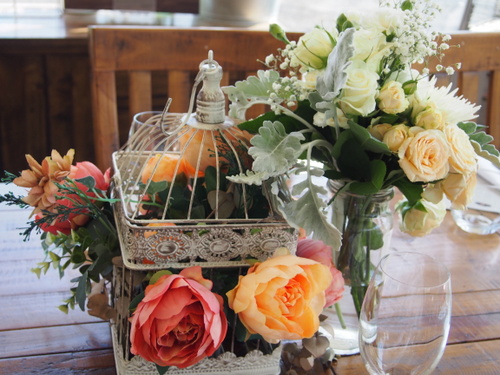 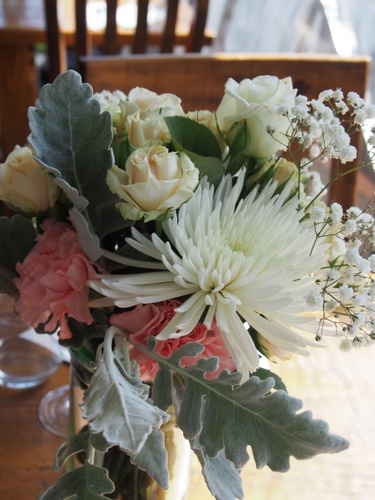 We started with Ms King’s signature dish from Zumbo’s Just Desserts, pineapple of my eye. On the show the challenge was to use at least three fruits, all of them the same colour. This dessert uses lemon, pineapple and banana and was declared favourite dessert of the competition by Adriano Zumbo. I agree and it was also my favourite; I liked the tangy and light lemon yoghurt mousse ball with the unexpected yolk in the middle. 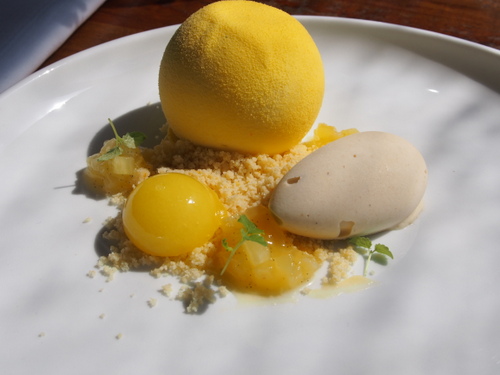 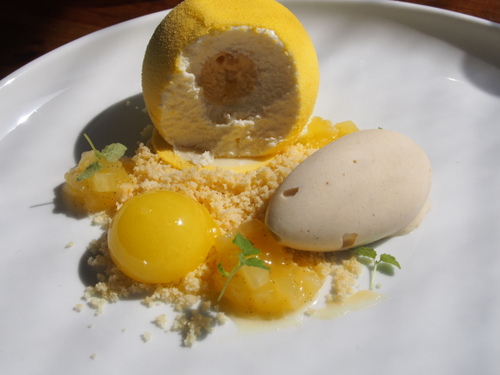 An unexpected semi-frozen ‘yolk’ in the middle

Next was a pretty in pink creation, ‘I’m berry fond of you’, which set a lightly perfumed crème fraiche lychee aerated mousse on top of sponge, covered with meringue. I found this a bit too sweet for me (and I have a sweet tooth!), but a young girl at our table licked off every last bit of cream. It is an unmistakably girly dessert. 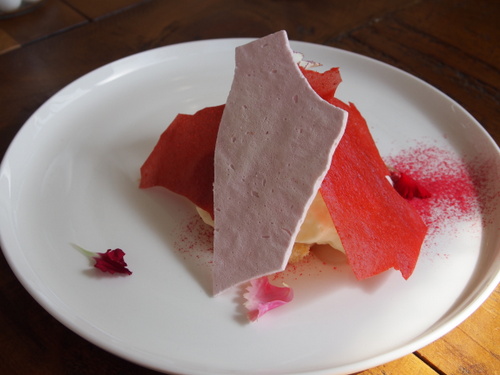 Third course was a palate-cleansing lime sorbet with a tequila gel and salted blood orange snow. It is deliberately inspired by a Margarita. The alcohol injection was subtle and not enough to cause a hangover, and the salt highlights also balanced rather than overtook. 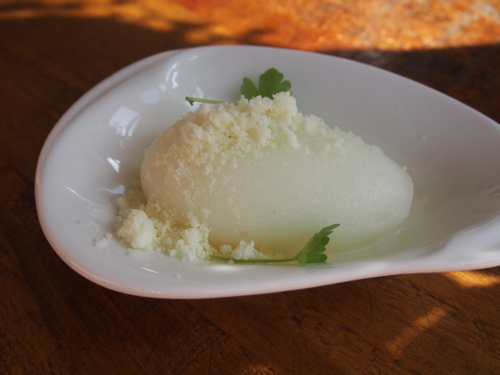 Refreshed, I was ready to dig into the finale, which utilized an unusual flavour combination that Ms King also used on the show: chocolate, passionfruit and caramel. Here it was a chocolate cake captured in a shiny stone-like mirror glaze, which hid soft rich chocolate mousse, passionfruit crème and peanut caramel. I liked this enough to finish it all after eating not one but FOUR courses of sweet desserts. 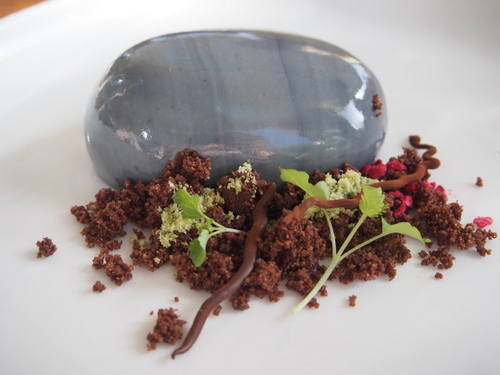 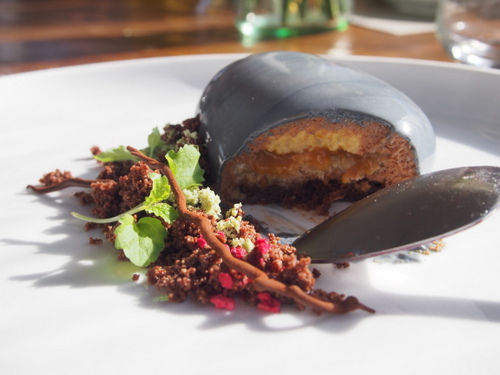 Inside the ‘boulder’ was sticky gooey goodness

For someone who has appeared on national television, Ali was surprisingly approachable and down to earth. And nervous. She is impossibly slim and beautiful for a dessert queen, so I had to ask – does she actually eat her own creations. “Oh yes,” she said. “I am always snacking and I always have heaps of leftovers.” (She also goes to the gym everyday – note to self, join a gym.)

Ms King will be out and about in Canberra over the next few weeks, including doing demonstrations at Latorta, and a special children’s event at the Tuggeranong Hyperdome.

chewy14 - 34 minutes ago
"A responsible and competent government would" Well there's your first problem. They haven't been forthcoming with robust bus... View
michael quirk - 2 hours ago
The government has yet to provide evidence to justify the light rail extension, the viability of which is tenuous given incre... View
News 115

Jay Annabel - 46 minutes ago
Ajay Cee ...... a drastically reduced number in 2020 because of covid lockdowns. View
Ajay Cee - 2 hours ago
Jay Annabel 36 in 2020. View
chewy14 - 3 hours ago
JC, Seeing as I've been the one quoting directly from the national plan, your memory seems a bit fuzzy. And I'm still waiting... View
News 1

Capital Retro - 54 minutes ago
The next step is to equip the ravens with lasers. Death to all drones!... View
Community 6

@The_RiotACT @The_RiotACT
A plastic surgery clinic and medical centres are among new exposure sites, and Calvary has confirmed a fully vaccinated aged-care staff member has tested positive https://t.co/RE8RHLqgTF (29 minutes ago)