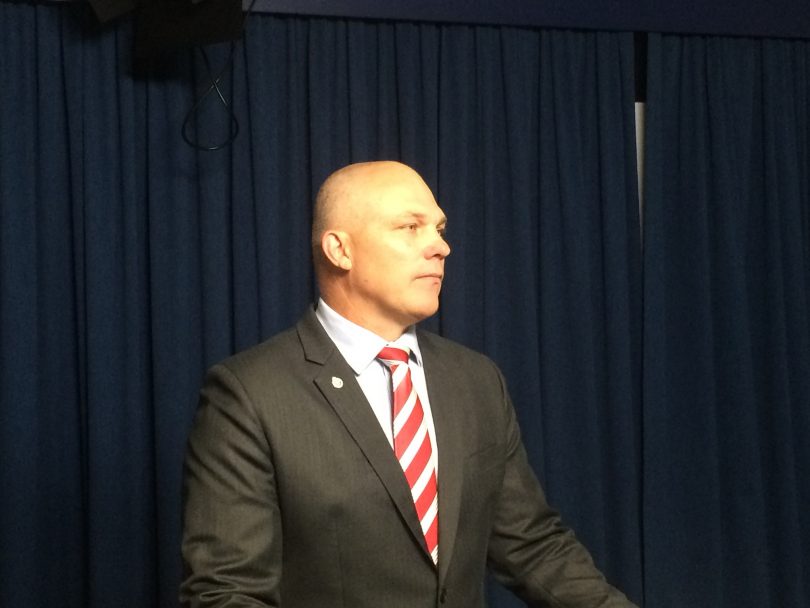 Detective Superintendent Scott Moller said the investigation had been ongoing for a number of years. Photo: Lachlan Roberts

Five Canberra men will face court today (Monday, 23 April) with charges of drug trafficking after police seized an estimated $1.5 million worth of drugs and other assets in a series of raids over the weekend.

Members of the Criminal Investigation team executed the raids across Canberra as part of Operation Tribulation and seized drugs which included cocaine, MDMA, cannabis and anabolic steroids.

One of the men also faces drug importation charges, while a sixth man was arrested in NSW and will face extradition to the ACT in the coming days.

LIVE from Winchester Police Centre where Detective Superintendent Scott Moller of ACT Criminal Investigations is making an announcement regarding a drug investigation.

Detective Superintendent Moller said the investigation had been ongoing for a number of years and remained ongoing.

Detective Superintendent Moller told media this morning that ACT Policing had worked with NSW Police, the Australian Taxation Office and various agencies in Australia and overseas with the investigation.

“The seizures were significant but probably the most important aspect of this operation is the members that were arrested,” Detective Superintendent Moller said.

“They were significant players in an organised crime syndicate.”

Detective Superintendent Moller said seizing the financial assets was a key component of their investigative strategy.

“We are committed not only to prosecuting offenders but to stripping them of their wealth and any assets derived from serious and crime,” he said. “My message [to criminal organisations] would be if you are selling drugs in Canberra, either myself or one of my team will be knocking on your door.”

Rodney Thompson - 32 minutes ago
Someone who actually deserves a payrise. View
Opinion 55

Ashley Wright - 41 minutes ago
Chris Olsen actually Clinton was right. William Hovell drive had the limit lowered between Coulter Dr and Bindubi street beca... View
Tolga Altinbas - 3 hours ago
Because one is a roadwork sign. And the other one is always there on the pole View
Wang Chow - 5 hours ago
My guess is that they changed the speed limit in Chisholm/Richardson because its cheaper than putting in more speedbumps that... View
News 21

Darron Marks - 7 hours ago
"But in this world nothing can be said to be certain, except death and taxes" View
Alex Elliott - 13 hours ago
The ACT has many interstate cars using the roads. How does the Government propose to tax these or apply a levy to them so tha... View
News 4

Bill Gemmell - 8 hours ago
Additional well-located transport infrastructure is a plus. However, maybe they should be thinking about covering these with... View
Greg Batten - 11 hours ago
Great idea for both ACT light rail and bus networks. View
Ashley Wright - 12 hours ago
Justin Watson it is, the article has that a bit wrong as the “new” stop is at Sandford Street intersection about 1km away... View
Opinion 9

Giles Tranter - 8 hours ago
We're both talking about Christianity here, right? View
Luke Felton - 10 hours ago
So OP suggests that the alleged actions of a very very small minority is a reflection of the institution blah blah. Yet, the... View
Dave Ryan - 11 hours ago
Steve Ross sooo.... your opinion is the best, then? OK. Answers my question about whether the rest of us are allowed to talk... View
Opinion 19

Julie Macklin - 10 hours ago
Many other countries don't have the unpopulated distances that we do. It's a different matter driving an electric car in Euro... View
Alex Elliott - 13 hours ago
Other countries have taxed petrol engine cars to encourage the uptake of electric vehicles which has resulted in their prices... View
Lifestyle 1

Martyn O'Connell - 11 hours ago
the 333 bus painted up to look like the XPT View
Katy Did - 13 hours ago
I loved that tram when I worked in Civic View
Karean Vaughan - 14 hours ago
I remember catching it at lunchtime, opposite the School of Music back then. A very convenient way to get to Civic centre . View
Property 11

@The_RiotACT @The_RiotACT
Nurses are seeking a fair go while negotiating a pay rise from a government that undervalues their important role, writes John Thistleton https://t.co/s98zXUqxR1 (38 minutes ago)

@The_RiotACT @The_RiotACT
Peter Papathanasiou's book about Greek families and secrets is heading for the small screen, with funding for developing the Canberra story https://t.co/UsxVpYrO2R (11 hours ago)

@The_RiotACT @The_RiotACT
Hot in the City: Asian Taste is bringing the flavours of Malaysia's fusion cuisine to Mawson https://t.co/BfapEQ6dPs (12 hours ago)