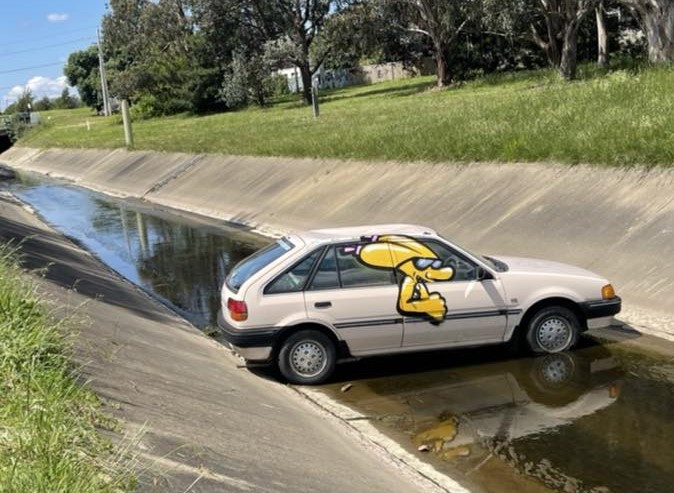 This 1989 Ford Laser was found abandoned in a stormwater channel in Lyneham. Photo: Canberra Drivers.

A cream Ford Laser hatchback in Lyneham has become the butt of ‘You can’t park there’ jokes after it mysteriously turned up in a stormwater channel.

Transport Canberra and City Services (TCCS) received a report of an abandoned vehicle located near the Lyneham Motor Inn on Monday, 7 November. Police officers attended the scene that afternoon to find it in the adjacent stormwater channel, with three doors open. It had not been reported stolen.

At the same time, photos began surfacing on the Canberra Drivers page on Facebook. There was little by way of description, but members of the 56,000-strong community lost no time in conjuring theories.

“Moments before that car ended up there, you just know someone in the car said, ‘Don’t worry, she’ll be right – you will easy clear that’,” Patrick wrote.

David described it as the “cheapest car wash in town” while Rob thought the driver might have “just finished watching the car race scene in Grease“. Others suggested the battery was simply “drained”.

“I haven’t seen a Laser dumped in the stormwater drains for years,” he wrote. “Surprised they even found one to steal.” 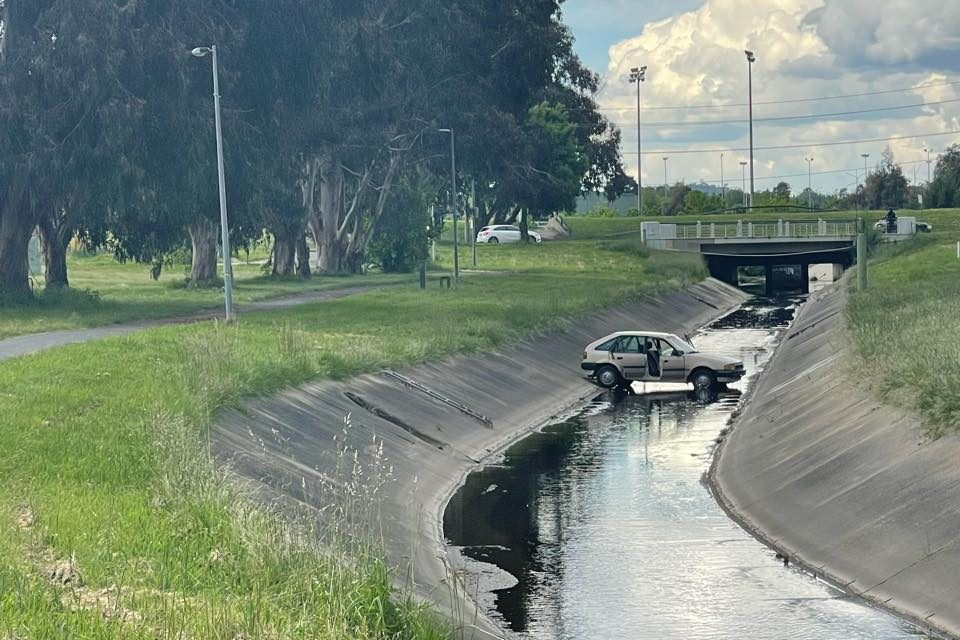 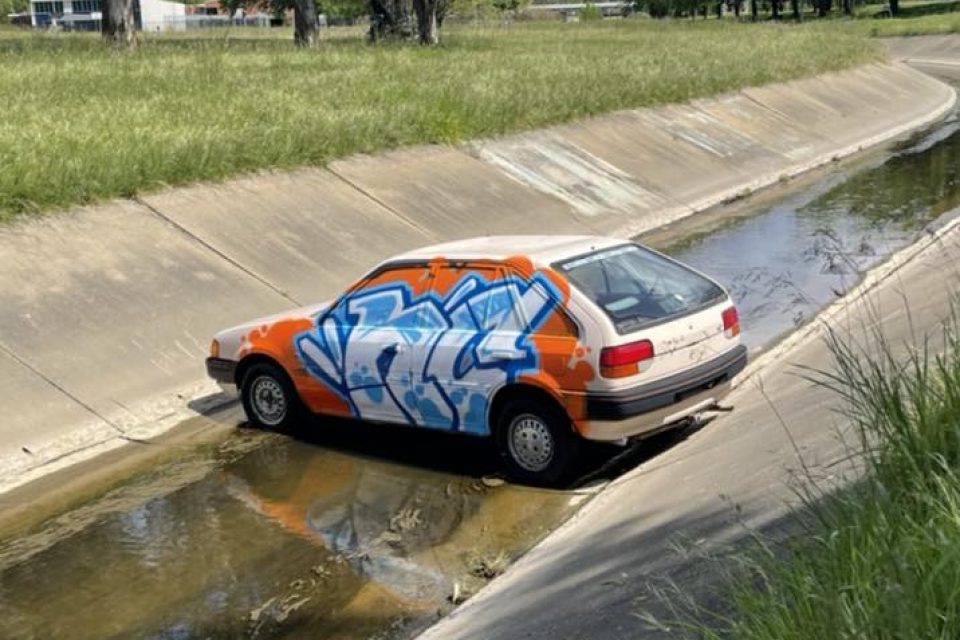 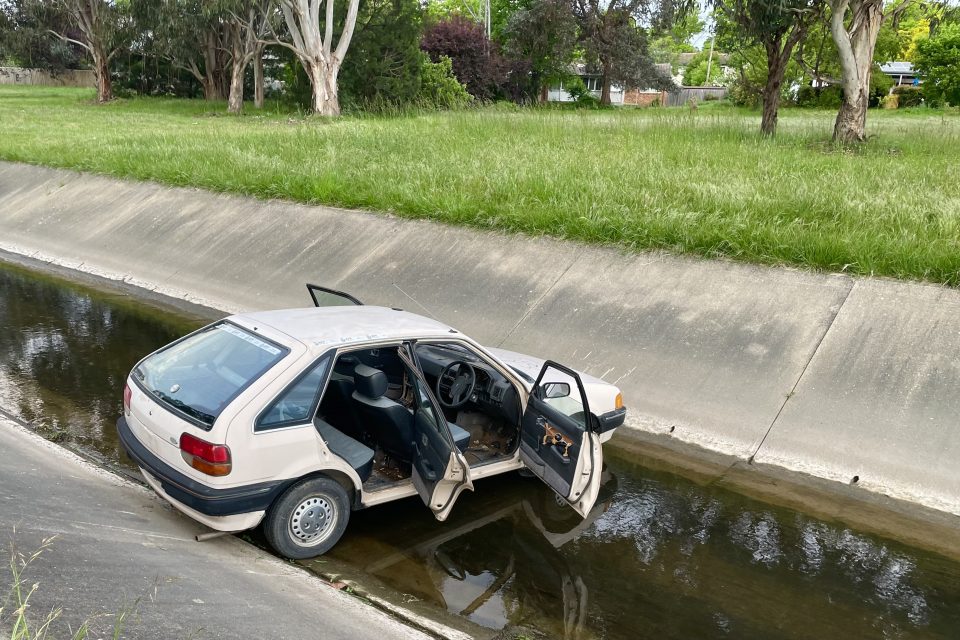 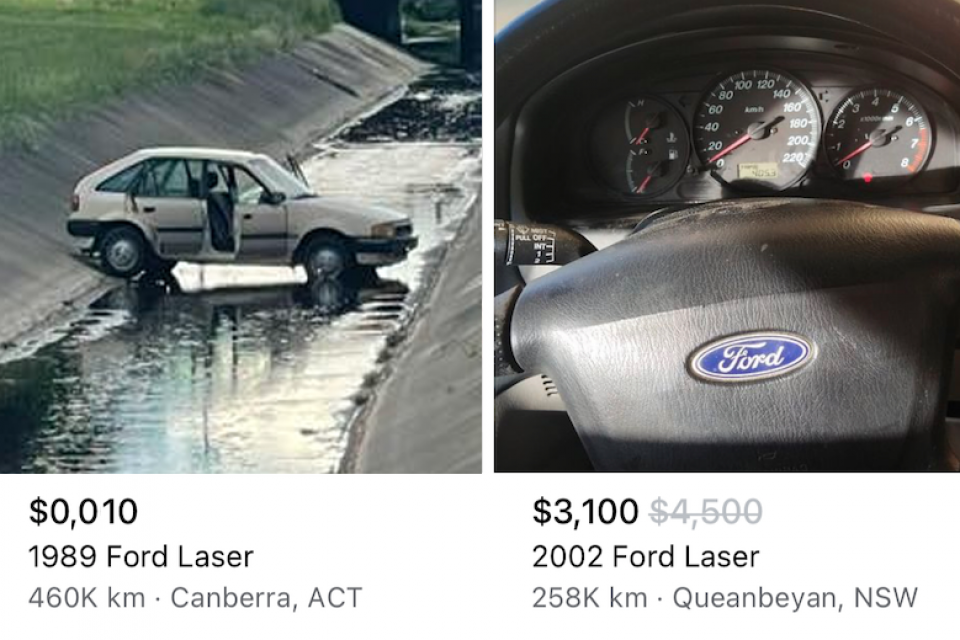 The 1989 Ford Laser even appeared on Facebook Marketplace for a short time, with 460,000 km on the odometer and listed for the grand total of $10.

It didn’t take long for a driver to turn up.

Subsequent photos showed a graffiti artist had sprayed a yellow cartoon figure onto the driver-side door and window, making it appear as though it was sitting inside. On the other side of the car was a graffiti tag in blue and orange paint.

“Whoever did that had some skill,” Brenton said, followed by Micky’s comment: “Love a good sense of humour.”

Despite the sudden transformation into a piece of public art, a TCCS spokesperson said due to the condition of the vehicle and its location, removal was “immediately organised”.

“The vehicle is currently impounded at the ACT Government impoundment facility while ownership enquiries are conducted,” they said.

Bear in mind that City Services has spent several weeks tidying up a 60-metre section of stormwater channel in Curtin, after flooding rains ripped out the concrete panels and dragged them downstream. They don’t want the Laser causing similar damage downstream.

But the idea of it living on somewhere as a piece of art doesn’t sound so far-fetched when you consider the work of Aboriginal artist Robert Fielding.

For a couple of weeks between July and August this year, a painted 1963 EH Holden station wagon was floated on Lake Burley Griffin by the National Gallery of Australia (NGA).

Called ‘Holden On’, the work was part of the fourth National Indigenous Art Triennial of ‘Ceremony’.

Fielding described the work, which was displayed on a custom pontoon near the NGA’s sculpture garden, as “a memorial of what is lost”.

“But also a challenge at the front door of our politicians to do better by our people,” he said. “Through creating an apparition on Lake Burley Griffin, the story of these cars, the people who travelled in them and the memories of all the Aboriginal people who have travelled this land since the beginning of time, is brought to the political heart of Australia.”

Masterpiece, I hope it’s off to the NGA.

ACT Life is so exciting.. Miss it 😢

Phil Coyle that would’ve been you back in the day chief! Hanging out in a laser in the drains. Doing drainies instead of mainies. 😎

“Since the beginning of time”. Wow how impressive, they’ve been here for 13.7 billion years.