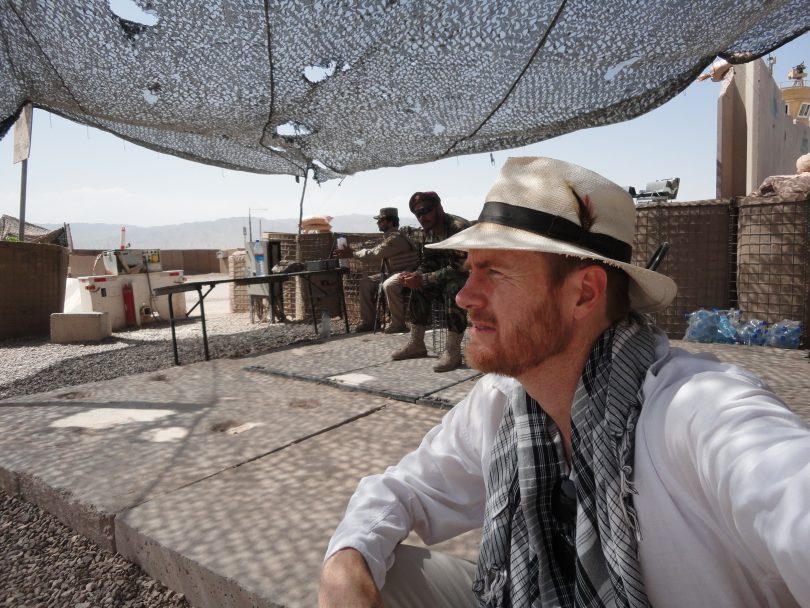 Canberra singer/songwriter Fred Smith – diplomat, author and chronicler of Australia’s war experience – will launch his new album at an Anzac Eve concert at the Street Theatre, before performing at the Australian War Memorial’s National Service the next day.

The new album, Warries, is something of a retrospective, documenting a fertile phase in Smith’s life, but also a period in which Australian soldiers and civilians were deployed into conflict zones in the Pacific and Central Asia as warriors and peacemakers.

A sequel to his acclaimed Dust of Uruzgan album, Warries has been described in one newspaper as “continuing a tradition of profoundly affecting Australians-at-war ballads that includes Eric Bogle’s And the band played Waltzing Matilda, Don Walker’s Khe Sanh and John Schumann’s I was only 19”.

Warries extends this tradition, beginning with the song Smith regards as the “granddaddy of them all” – a searing rendition of Schumann’s setting of Henry Lawson’s poem Scots of the Riverina.

“Scots is a remarkable piece of writing – a bitter struggle between father and son, a difficult marriage, the impact of a faraway war on a small town, the thin consolations of the Presbyterian Church,
culminating in some meagre redemption, all in two minutes of verse!” Smith says.

The album then moves on to two songs Smith wrote while working with a little-known entity called the International Peace Monitoring Team, stood up by Australia in November 2000 in the immediate aftermath of ethnic violence in the Solomon Islands.

Say a Prayer reflects on the loss of the HMAS Canberra in the Battle of Savo Island in 1942, while Blue Guitar is a comic Dylan-esque blues ramble describing the chaos of Honiara after armed militants broke into the police armoury and ‘borrowed’ 1000 automatic weapons, but before RAMSI arrived to settle things down.

Then follows a suite of songs from Smith’s period with the Peace Monitoring Group in Bougainville. These capture the sinister tensions of the civil war but also the beauty of the islands and the resilience of a people who found their way back to peace and normalcy.

With Bougainville approaching a referendum on independence and the Pacific generally front and centre in the Australian political radar, these songs are a timely reminder of the complex Australian investment in this corner of the near neighbourhood.

The album then turns to Afghanistan, with two songs Smith wrote (post Dust of Uruzgan) on a second stint in the dying days of the Australian mission in Uruzgan province. Going Home captures the mixed feelings of soldiers facing the difficult return into family and society, as we prepared to pull out leaving the province in the hands of ‘local security providers.’

Derapet is a seven-minute epic describing events before and after the death of Lance Corporal Jared ‘Crash’ McKinney at the Battle of Derapet – the longest-running contact by Australian regular forces since Vietnam.

“Sitting at Crash’s ramp ceremony in August 2010, a little voice in my head said ‘write a song about this soldier’. But I never got around to it till I got an email from one of his mates a couple years afterwards,” Smith says.

The CD finishes with Century Girl, a rocking ballad tracking Australia’s transition from naivete since Gallipoli.

Warries is Smith doing what he does best: vivid reportage, never jingoistic, humanising distant conflicts and reminding us that Australia, while a continent, is not an island.

WHAT: Fred Smith in concert

For tickets go to www.thestreet.org.au