Free talk by 2012 Astronomy Photographer of the Year Martin Pugh 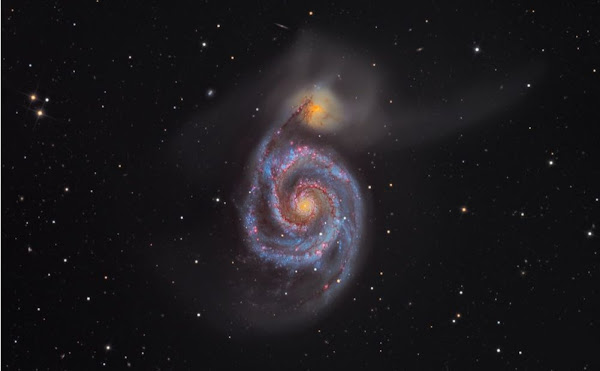 It’s World Space Week 4 to 10 October, and here’s a fantastic opportunity for anyone interested in astrophotography. A free presentation in Canberra by the 2012 Astronomy Photographer of the Year Martin Pugh.

You can check his award-winning photograph of the Whirlpool Galaxy M51 on my blog or better still click through to the high-resolution version for all its beauty.

PUBLIC PRESENTATION BY ROYAL OBSERVATORY ASTRONOMY PHOTOGRAPHER OF THE YEAR 2012

This event is open to the general public and all are welcome. The venue is on the left directly inside the doors of R1, before the security desk and barriers.

The UN-declared World Space Week (WSW) occurs annually during 4 to 10 October. In a combined effort between Defence areas with in interests in promoting military interests, in space and space professionalisation, and the American Institute of Aeronautics and Astronautics (www.aiaasydneysection.org), are pleased to be able to arrange this presentation by an internationally renown and award wining amateur astrophotographer.

Getting started in serious amateur astrophotography.

For 20 years, he moved between ships and establishments and in the late 90’s, together with the overwhelming appearance of Comet Hale Bopp in 1997, he became increasingly interested in amateur astrophotography. Many years of study and practical experiences gained with different but increasingly larger aperture telescopes and imaging systems winning the South Pacific Star Party astrophotography competition and the premier Australian Astrophotography competition in 2008. A crowning achievement was the release of a three stamp collectors set by Australia Post, to mark the 2009 International Year of Astronomy, which featured his image of the M78 galaxy, and coincided with winning the inaugural Astronomy Photographer of the Year competition hosted by the Royal Observatory Greenwich. His deep space images can be seen on the website at www.martinpughastrophotography.id.au.

Thanks for putting this up Gunghalin Al. I was going to do it later in the week 😉 See ya there!

Alas Michael, election and board commitments mean I won’t be able to attend. So I hope someone will record it and stick it up on Vimeo or somesuch?

I would like to catch up with you though for something on the ANU plasma thruster research to go on my blog and on http://www.AustralianScience.com.au?

Thanks for putting this up Gunghalin Al. I was going to do it later in the week 😉 See ya there!

David Rudland - 19 minutes ago
Wow....really more units. I want to say so much but the words are expletives. View
Cube Starr - 6 hours ago
Being from the Southside and not a fan of horse racing, l say fill the area with high rise apartments! View
News 32

Charles Godworth - 5 hours ago
But with global warming, they'll come back well before they're due and there will still be re-runs of Home and away on the bo... View
Breaking 31