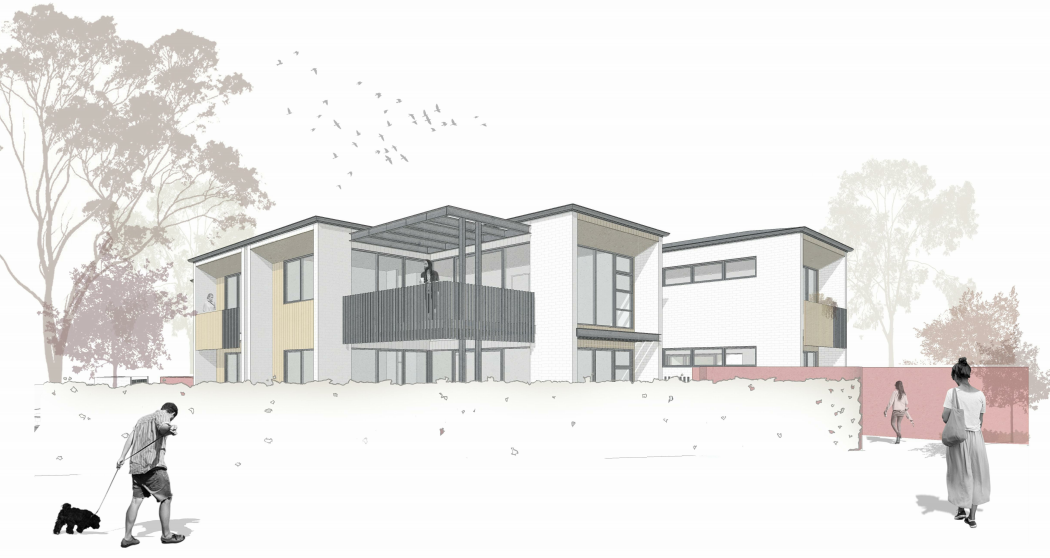 Approval of planning changes to pave the way for the construction of the controversial Manor House demonstration project in Griffith has been labelled an attack on the integrity of the planning system.

Griffith Narrabundah Community Association president David Denham said Planning and Land Management Minister Mick Gentleman’s approval of Variation 375 this week was disappointing but consistent with the ACT Government’s record of not listening to the community.

“Governments that don’t listen to the community eventually don’t do very well as we found out in the recent election,” Mr Denham said.

Mr Gentleman approved the one-off V375 despite the overwhelming number of submissions made during the consultation period being opposed to the proposal.

Out of 535 written submissions received, only four were in favour of the proposal – a two-storey, separately titled, four-unit complex with nine car parks to be built at 20 Blaxland Crescent, currently zoned RZ1 and occupied by a single residence.

The Manor House proposal is part of the government’s Demonstration Housing Project, which aims to test and showcase how a compact and active city – including residential low-rise, low-density housing – can be achieved through innovative planning, design and delivery.

The main sticking point was the RZ1 zone, which opponents argued was inappropriate for such a proposal and would be the thin edge of the wedge and usher in a new wave of higher density development across Canberra’s suburbs.

Mr Denham said NSW had had manor houses for years and there was no need to build one in RZ1 to test whether they work.

The planning directorate website says it will work with proponents to deliver a handful of built homes that showcase different housing types such as co-housing and ageing in place homes to make for a more sustainable and inclusive future for Canberra.

It says the Manor House is a housing typology showcasing how infill development can be delivered within the same ‘footprint’ as a residential house.

They also said that the only beneficiary would be the proponent and there is no overriding public good.

But the issue did reveal a generational divide, with some younger people supporting the idea because it would provide more housing in a desirable area.

Housing lobby group Greater Canberra, which was founded to support the proposal, welcomed the approval.

“We are thrilled that the Griffith Manor House is able to proceed,” secretary Andrew Donnellan said.

“The Demonstration Housing Project is an important effort to show how new kinds of medium-density housing can help address our housing crisis.

“The government must ensure that the results of the project are evaluated in a timely manner so we can expand ‘missing middle’ housing choices all over Canberra.”

Mr Donnellan said a recent research paper by Marko Torbarina, The Future of the Canberra Suburb, published by the Alastair Swayn Foundation, found that medium-density housing types such as the Manor House could play a role in housing Canberra’s growing population in a more affordable and sustainable way.

He said that as the government continues with its planning reforms, Greater Canberra would push for planning rules that enable the urban infill needed for a more liveable, sustainable and affordable city.

“The ACT Government’s Demonstration Housing project enables prototypes of these types of developments to be tested to see if they are suitable for broader application across Canberra,” Mr Gentleman said.

He said minor amendments were made to the draft version after community feedback, including limiting the size of the building to 50 per cent of the block in response to concerns about the scale of the development.

The next step would be the lodgment of a development application.

The Manor House is the second project in the ACT Demonstration Housing Project to obtain a Territory Plan variation after the less controversial Stellulata Cohousing project in Ainslie.

Can someone explain slowly why all the toffs(usual suspects?) are outraged? Seems like a reasonable and efficient use of a well located bit of dirt.

“It says the Manor House is a housing typology showcasing how infill development can be delivered within the same ‘footprint’ as a residential house.”

Regardless of what is being said right now, the footprint will doubtless (after the usual further massaging of rules following the initial announcement) not be that of the house being demolished for this profit-fest, it will be an “up to the boundaries and we don’t give a stuff about neighbours’ privacy and solar access” footprint, which will also, of course, make a mockery of all the current hot air and hand-wringing about vegetation cover and the urban forest.

Beyond the practicalities, why is this thing being spun as a “Manor House”, a term which conjures up images of pheasant-hunting squires and sherry-tippling matrons in an episode of Midsomer Murders, at the same time as many Canberrans are getting excited about the fact that we now have a Minister for the Republic and are turning their minds to indigenous re-naming of suburbs and other places?

Was this the controversial RZ1 development where the owner of the land was a current or former executive from ACT land and planning or the land sales agency?

If so, I’m more concerned about the potential for unfair profiteering from the development than the actual development itself.

I fear that, in its quest for more ‘affordable’ housing in Canberra, the ACT Government has become too dependent on a handful of developers. The net result of this relationship is NOT more affordable houses becoming available. The principal beneficiaries are the ACT Government and the developers who make record profits on their investments.
The unfortunate losers are first home buyers and the natural environment. Canberra can no longer be labelled the ‘Bush Capital’…it is rapidly becoming the ‘Concrete Capital’.

The proposed development is still two story So as a person over 65 I will not be selling my single story home to live in a two story townhouse. But I will live in a single story townhouse with some outdoor space so that I can have a modest garden. It’s time the labor government realised that not everybody wants to live in a box with a backyard which is 3 m x 2.5 m. A garden of 6×6 would Allow you to have a modest outdoor area where grand children could play or have a family barbecue, Is more desirable.

Don’t worry too much, it may never get off the ground in the current environment. 😬

I think these smaller scale infill options are a much better option than more high rises. Maybe the ACT government needs to come up with clear guidelines so it doesn’t get out of control and it doesn’t seem like they’re doing favours for a minority.

Evey home should have parking for 4 big cars

Daniel Duncan it is why we have wide verges. Most blocks even have compacted wheel tracks as a guide to the optimal spot to leave your chariot.

Creating more townhouses in these inner suburbs wont make Canberra more affordable! Lets have a bit of a reality check!

Martin Miller the townhouses typically sell for the price of an old house in the suburb and often more, each

Just to clarify, is this a one off or a planning change allowed throughout canberra

George Stoyanoff one off!

Martin Miller so how did they get a one off planning change.

George Stoyanoff A Variation to the territory plan approved by the Minister for planning under the name of a ‘Housing demonstration project!’

When I said one off? I meant in this location. There are 6 of these ‘ Demonstration projects’ in Canberra.

Years ago, when there was a liberal government, they looked at future housing developments and there was an absolute outcry at what people saw as building on ‘green space’

Even where the entire zone had previously been actually reserved for future homes.

But this Labor government has in fact been filling in such ‘green space’ including those very areas that were set aside, as, ‘green space’ with urban infill.

No on bats an eye

You folks get what you vote for

Good, this kind of housing is the missing middle we need more of in the inner suburbs!

While this seems a good idea, I am curious to see what parking infrastructure is included in the plan. Currently there is a block for one house which usually means parking for (on average) two cars to be parked on the block. If there is to be up to four houses now built on the block will there parking provided on the block (not street) for the additional 6 cars?

Ken Owers only solution. Impossible to do otherwise

George Stoyanoff wouldn’t it be great if we had ubiquitous cycling infrastructure linked to public transport which meant every dwelling didn’t have to have a car park attached to it?

Robert Knight even better if those that cant cycle have a shared electric car or other people mover to use when required. Hopefully we could have on demand public transport linked to public transport hubs.

Good, we need more “missing middle” housing like this! 9 car parks does seem excessive, though

Some of the reasons neighbours and the unelected busy-bodies at the ‘community council’ were giving about why this project is THE WORST THING EVER include; “who will maintain the garden” and “what if the occupants don’t like each other” .. says it all really. This is a great project and we should be doing more to create housing options in established inner suburban areas. 👊

Leah Dwyer i recall groups against high density on turner advised that people would be dying from the slippery footpaths from being shaded and from cars leaving basement carparks. Its just nimbism and privilged entitlement.

To the Costigan column ….