Giiyong among a host of winners at Southern NSW Tourism Awards 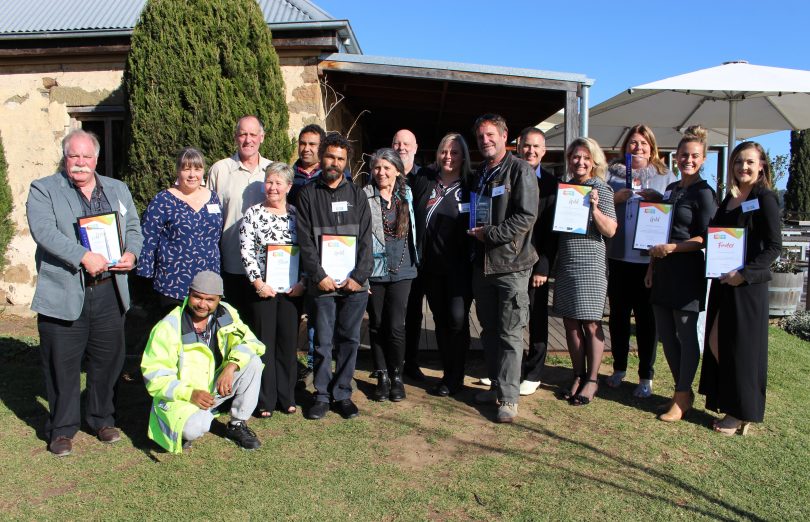 Some of the best and brightest tourism operators in Southern New South Wales have been acknowledged at the Regional Tourism Awards in Ulladulla.

“These awards aren’t only about recognising winners they are about developing our industry, encouraging excellence and improving our businesses,” says Jo Spencer from the NSW Business Chamber.

Finalists across the 10 categories included:

“Congratulations to all the finalists for their collaborative effort towards achieving our common goal of ensuring NSW maintains its position as Australia’s number one state for tourism,” NSW Minister for Tourism Stuart Ayres says.

In the year that ended in March of this year, regional NSW welcomed a record 25.8 million international and domestic overnight visitors, “and injected $13.7 billion into the regional NSW economy,” Mr Ayres says. 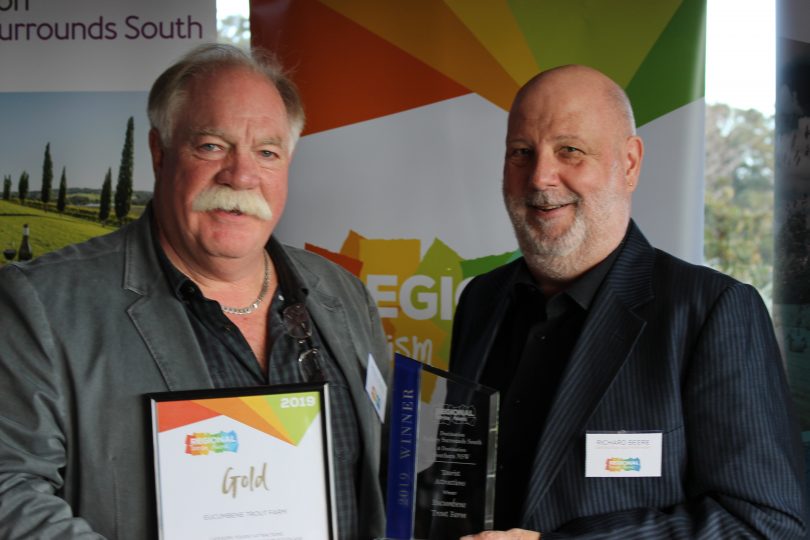 The afternoon awards ceremony was drenched in sunshine at Cupitts winery in Ulladulla, a delicious lunch straight out of their kitchen garden, washed down with Cupitt’s own brews and wine.

Eucumbene Trout Farm at Rocky Plain near Jindabyne was the first winner, taking gold in the ‘Tourist Attractions’ category.

One of the biggest cheers of the afternoon was for the Giiyong Aboriginal arts and culture festival, a collaboration between Twofold Aboriginal Corporation and South East Arts, who won gold in the “Festivals and Events’ category. 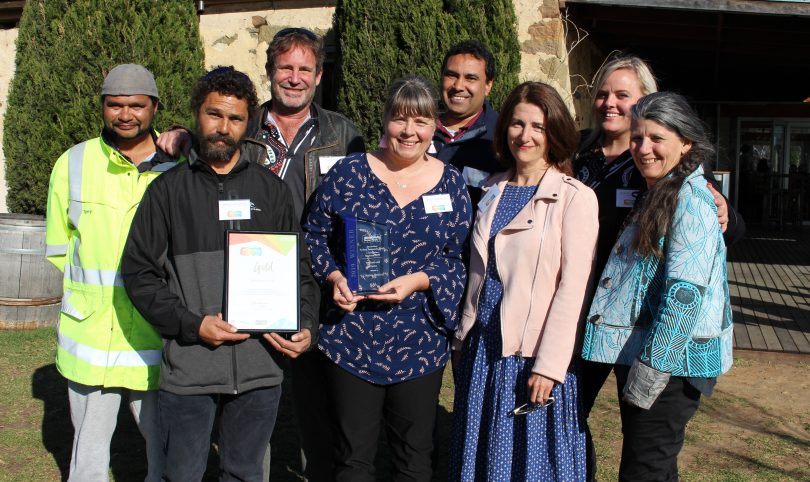 “This award [is an] acknowledgement of the value of Aboriginal culture and its deserved place at the forefront of our creative and social landscape here in South East NSW.

“Giiyong Festival proved in spectacular fashion that our local talented Aboriginal artists, performers and cultural leaders have a huge amount to contribute to our cultural understanding, our local economy and our tourism industry.

“Giiyong Festival entertained over 6000 people last year. But, it did something else too.

“It educated people. About culture, about pride, about language, about issues affecting Aboriginal Australia, about traditional practices, about contemporary artforms and about the place in which we call home,” Ms Williams says. 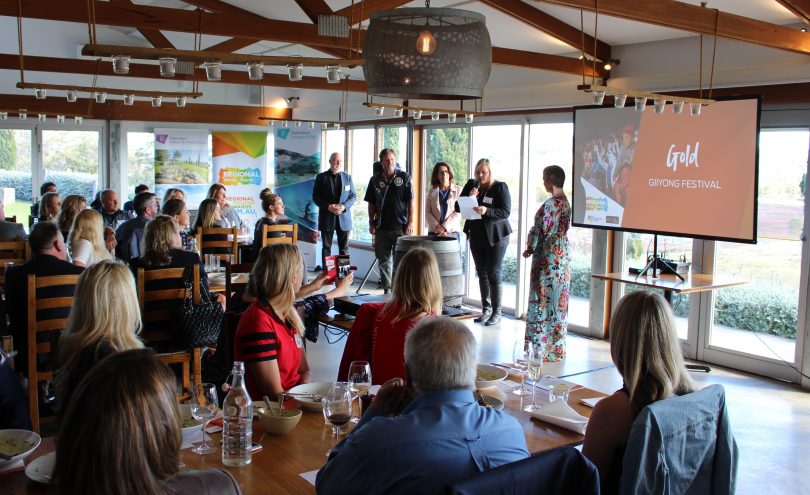 The next Giiyong is already being planned for Jigamy between Eden and Pambula in September 2020.

Alison Simpson from Twofold Aboriginal Corporation says her crew can’t wait to do it again.

“The 6,000 people who came last time is more than the population of Eden,” she says.

“That showed us that an event like this was long overdue. It’s something that Aboriginal and non-Aboriginal people are still talking about and we are really excited to have that opportunity.” 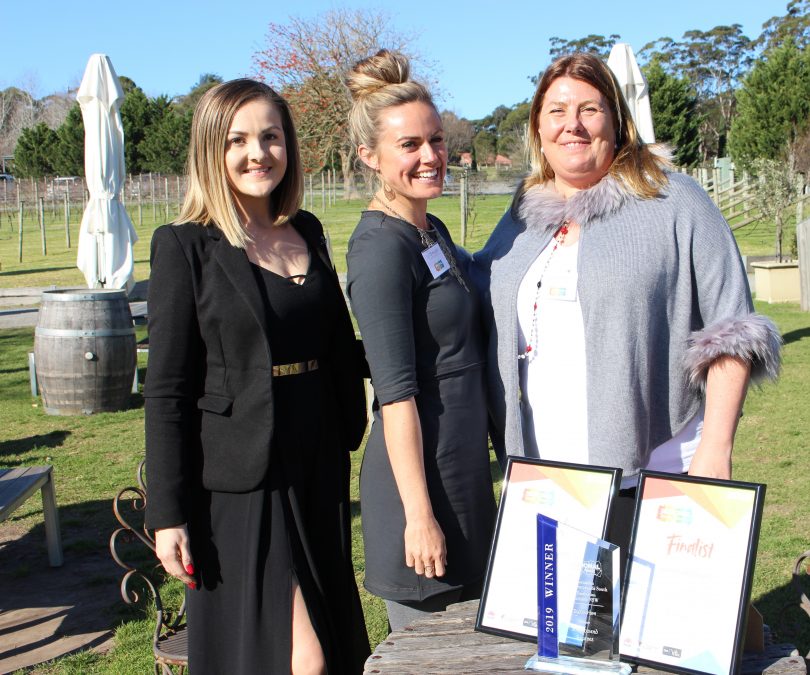 Sally Buckley (r) and her team from Southbound Escapes.

Sally Buckley from Southbound Escapes was the next winner in the ‘Ecotourism’ category, Jenny and Arthur Robb from Kiah Wilderness Tours claimed the silver.

“Southbound Escapes is a luxury tour operator covering the whole coast – Sydney to Eden, but we are based in Narooma,” Ms Buckley explains.

“It’s an incredibly pristine coastline – incredibly beautiful, and for visitors who haven’t been here before it offers adventure and they can really get out into the wilderness.

“This is a really special place.”

All the finalists and winners now have the opportunity to progress to the State Tourism Awards in November.

Gavin Bradley - 27 minutes ago
Mary-Ellen Bradley not us this is only ACT gov View
Kerry Apted - 5 hours ago
excellent! View
Samantha Freeman - 7 hours ago
Tell that to the Federal Govt. No one has moved to a hybrid model, only state Govt View
Opinion 16

Sofia Zivkovic - 33 minutes ago
No point, comp is getting worse each year. View
Tim Mitchell - 8 hours ago
The joint A-Leagues men and women trophy really strengthens Canberra's bid. Would be strange having Canberra as the only team... View
Community 142

kenbehrens - 3 hours ago
A few years ago when we were visiting our son in Sydney, there were blankets and items of clothing under shelter on the stree... View
jwinston - 4 hours ago
harcm said “tim_c – what a load of rubbish you talk. What if your schooling was completely disrupted by domestic violence... View
Acton - 4 hours ago
The money you are giving out of misplaced guilt to a street beggar is just funding their drug, smokes and/or booze addiction.... View
News 1