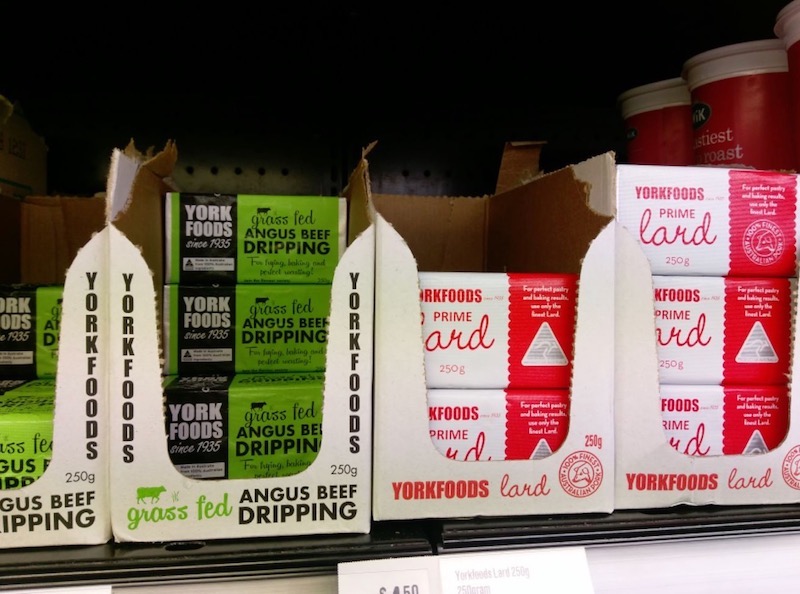 Good news at the start of 2018 for anyone resolving to improve their diet and enjoy their food. You can use suet again, the hard white animal fat and magic ingredient in pastries and basting roasts.
More good news. Feel free to soak up and eat dripping that smells of roast beef on Sundays.

Because the tide is turning in favour of fat once more. Dieticians say it is safe to return to the kitchen and cook with natural slow release saturated fats we have not been game to think about for all these years of denial and hopeless weight-loss campaigns.

The bearer of these tidbits is the lard factory in Goulburn. Did you know Goulburn has a lard factory? I didn’t until a friend told me, after hearing of York Foods while visiting a winery at Lake George. He called it a fat factory, and York Foods would happily accept that title.

York Foods has a long history in Sydney, where it bought the last pen of pigs from Homebush abattoir before they closed. York Foods were specialising in pure animal-based cooking oils when a fire caused them to re-locate to Goulburn in 1990, where they have been ever since.

Their website is heavy with boasts about fat: “We live and breath the world of lard and dripping.”
“We have been making fats for the kitchen for three generations.”

“We survived the lows and then the extreme lows but we are still here because we make the best, 100 per cent pure products on the market and we make them right here in Australia.”

In Goulburn, actually, on the Braidwood Road from where products are exported around the world.

Wave after wave of evidence is clearing fat of its culpability in heart disease. So much so I have been asking for almost a year York Foods principal Ted Philpott for an interview. Ted always politely declines.

The ABC’s national rural reporter Sarina Locke had more luck in 2011, interviewing Ted and his daughter Heidi Cheney. At the time York Foods was venturing into new lines of oil, using rendered Australian wagyu cattle. Locke said people old enough to remember wartime rationing would be amazed to learn that bread and dripping could make a comeback in the gourmet market.

Suet (this information is not on York Foods site) grows around the kidneys in cows and sheep. It must have nearly topped the list of banned substances during the height of the low-fat and fat-free diet craze that still lurks within the shadows of eating advice. Suet almost disappeared from supermarket shelves.

Before then, my nanna always talked about suet when making a pudding. She would wrap it in a cloth and hang it for weeks from the laundry door. York Foods says suet has a higher melting point than butter which means a Christmas pudding is able to cook for longer before the suet melts. If you think about a steamed pudding cooking away, if you’re using butter it will melt as soon as the mixture gets warm and amalgamates with it.

Fat and other food groups have a bad name from a mountain of misinformation on social media. This point is well made in Beau Donelly and Nick Toscano’s thoroughly-researched new book, “The Woman who fooled the world.” The book expands on their investigative reporting that demolished a young, fast-rising, business woman, Belle Gibson’s extraordinary claims of curing her brain cancer. Gibson never did have brain cancer, but built her media profile, book deal and new app on dodgy claims about healthy eating.

Donelly and Toscano present the views of dieticians in Australia and abroad who are re-evaluating observational trials on eating and questioning their recommendations on fat consumption. Why? In part, because the longstanding hypothesis linking fat to heart disease overlooked randomised controlled trial evidence, and instead was drawn from a selective set of lower-quality evidence that came from ‘observational trials.’

Like York Foods’ website, the book’s dieticians and a growing band of other legitimate sources remind us how much people have forgotten what good food is these days. They say dumping whole food groups on account of the latest fad diet is probably responsible for increasing eating disorders. So enjoy your lard-enriched food in 2018.