Government in denial about homelessness as Safe Shelter opens for 2018

The number of homeless in Canberra is rising.

As the nights start chilling despite this year’s Indian summer, the city’s homeless men can now look forward to a roof over their heads with the reopening of Safe Shelter ACT for the winter.

Using three church halls in the inner north, Safe Shelter alternates between the three, with one shelter open every night from Sunday 22 April until 29 September from 7 pm to 7 am.

All Saints Anglican Church, 9 Cowper St, Ainslie will open one of its halls on Sunday and Monday nights. St Columba’s Uniting Church, 10 Fawkner St, Braddon will open its Lewis Hall on Tuesday, Wednesday and Thursday nights. The Salvation Army’s Canberra City Corps hall on the corner of Fawkner and Elouera St, Braddon, will be open on Friday and Saturday nights. All are on the No 7 ACTION bus route.

Safe Shelter said that census figures showed that the number of “sleeping rough” homeless in Canberra that could be counted rose from 28 in 2011 to 54 in 2016. ”Anecdotal advice from welfare agencies and the AFP suggests that the number could be higher, so the need is growing, not falling,” it said.

During the 23 weeks from 24 April to 29 September its more than 100 volunteers provided 381 “bed-nights” for homeless men.

Safe Shelter had hoped that the ACT Government would provide funding for more crisis accommodation but it had not materialised.

Coordinator Richard Griffiths said the ACT Government believed crisis accommodation was not essential in this town.

He said that according to the Government’s referral centre OneLink, if someone became homeless the average time to find accommodation was 25 days.

“In theory, I suppose people are supposed to spend at least 25 days on the street or in their cars,” he told ABC Radio.

The volunteers who run the shelters welcome the guests, provide hot drinks and generally ensure that all the guests can get a peaceful, dry and reasonably warm night’s sleep. On their one night per month, the volunteers sleep on the hall floors, like the guests.

When the guests leave the shelters at 7 am, they are encouraged to go to the Early Morning Centre, 69 Northbourne Avenue, Civic for breakfast and to start to connect with support services that will try to help them find permanent accommodation.

Safe Shelter ACT currently has over 100 volunteers, many of whom have served in previous winters. All must be over 18. Two-evening induction courses for new volunteers will continue throughout winter, with the next courses scheduled for 1 and 2 May and 15 and 16 May. 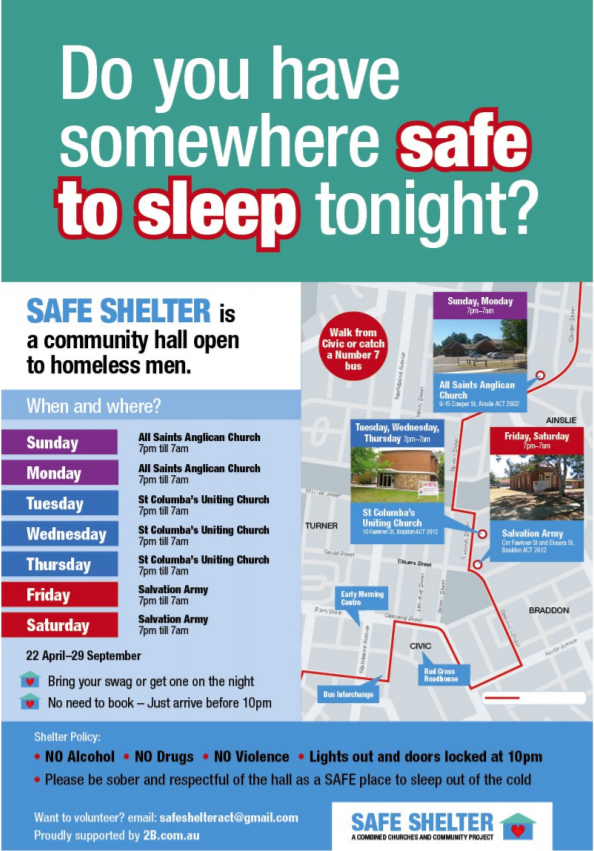 Where are the homeless women looked after?

The ACT Government website lists 12 women’s and/or family refuges in Canberra & Queanbeyan. Funny thing was I couldn’t find a similar page detailing refuges for men on that website. Apparently men aren’t in need of assistance from this government.

Most of the ACT governments hardship is completely gendered.
http://www.communityservices.act.gov.au/hcs/policies/domestic_violence_policy#procedures
Most of their policy that could say people suffering from domestic violence just says women only.

http://www.communityservices.act.gov.au/hcs/policies/domestic_violence_policy
Domestic violence is defined as Women as victims only. Not children or Males.

Men get one shelter service with no proper funding and it is only 7 nights a week during winter.

Women get dozens of shelters and generally also are likely to get help from friends and family, such as couchsurfing. Men are hardwired to help women. Women are also more likely to help women (even though women generally hate other women).

Neither is likely to help a man in need. The Government won’t either as there are no votes in helping men.

You can count on my vote.
I’m sure there are others like me too, every homeless man / woman is someone’s relative / child / parent.
Natural justice should prevail over social justice

Funny (it’s not really) how there’s plenty of money for Andy’s train set.

Kalo Arepo - 6 hours ago
Were they trying to jump the queue? View
Smackbang - 15 hours ago
How about you stop passing judgement on someone you know precisely nothing about? View
Opinion 82

consumeradvocatecanberra - 8 hours ago
Most folk don't get it. Canberrans love their cars and have done so for 30 years. It's quick and convenient. But, imagine car... View
Lucy Jane - 9 hours ago
4 day week for everyone but everyone gets a different day off. Will help immensely with traffic congestion and has been trial... View
Ronnie Adams - 13 hours ago
Helicopter 🚁 View
Community 15

Stephen Saunders - 14 hours ago
I've been on the Donor Register for many years, and I don't think my family objects, still in practical terms, I have little... View
Motoring 6

Will we see permanent emergency accommodation services in Canberra in the future?