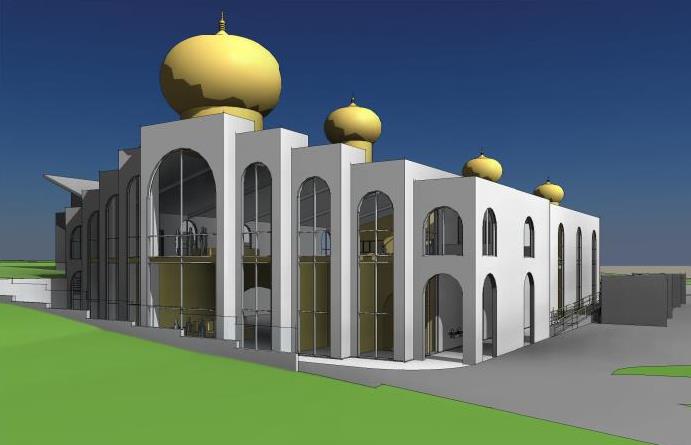 A rendering of the proposed Sikh temple in Weston, from the DA.

A two-storey temple to hold 400 worshippers, topped with decorative gold domes, has been proposed for Weston to serve the ACT’s growing Sikh community.

A development application has been lodged by the Canberra Sikh Association for the site of the community’s current temple, a smaller structure on Hickey Court next to the Orana Steiner School and the Baha’i Centre.

The new temple will incorporate the current one and require a lease variation to allow for an almost doubling of the allowable floor space from 1500 square metres to 2914 square metres.

The upper level will house a prayer hall, with the lower level containing a kitchen, dining hall and library or study, with an intermediary entry area with toilets and shoe rooms. There will be a new driveway crossing, car parking and landscaping.

The DA, prepared by Hugh Gordon Architects, says the large 11,234 square metre block is zoned for community use and the $427,000 proposal will meet the spiritual and community needs of the growing Sikh population in the ACT.

“This significantly larger, and accessible, Temple, is critical to fostering social inclusion in Canberra,” the DA says.

The pre-cast concrete structure is designed according to the principles of Sikh architecture, with the gold-painted domes an important design element.

Although a two storey building, the domes mean the overall structure will be three-storeys high but no taller.

The temple complex will be completed in two stages – first the mid floor and lower floor, with a gravel car park; followed by the upper floor, domes, and a sealed car parking area.

Initial consultation with the community prompted some revisions to the plans, but subsequent feedback from the school, Baha’i Centre and neighbouring residents has been positive and no objections have been lodged.

The temple will use opaque glass on those windows facing the boundary to protect the privacy of closest houses, and it will not overshadow them, it says.

A Traffic and Parking Report prepared by Graeme Shoobridge Advisory Services says car parking will be sufficient for a congregation exceeding 550 worshippers and the predicted traffic generation is not expected to exceed the spare capacity of the existing road.

Our apology for the very delayed response. The Temple is open to all and anyone may attend when it is open. No special invitation is required. Feel free to come whenever it is open and just comply with the guidelines regarding covering of head and removal of shoes. Ask anyone around and they will be happy to assist and guide you.

All Sikh Gurdwaras (Temples) are open to everyone and do not discriminate. Prayers start around 10 am and finish by about 12 noon when holy communion (Deg) is served followed by Langar (vegetation meal)

How beautiful! A lovely addition to our diverse community - hope there will be open days so we can all visit.

Wonderful! I love that there is a diversity of places to workshop in Canberra. Looks beautiful!

wish they'd build it at tuggs though

I see the beauty of God in all people. Great news.

These people are so welcome in our community.

As a resident of the ‘new bit’ of Weston, I was please to join a diverse and welcoming community. Am looking forward to this. My only reservation is that it will take two stages.... hopefully the vision can be delivered more quickly.

Paul James The 2 stages are due to funding constraints. It is not possible to get a bank loan as the land is designated Community Use. All work being done will require cash up front.

As there was massive outrage about a mosque.

Are you trying to incite a hateful between the two communities?

Saab InOz no, exactly the opposite if you read my comment right.

My comment, in a nutshell is "Why do we care, why is one OK and not the other? Can't we just get along?"

Saab InOz why the anger?

Christopher Scott ummmm because sikhs are known to help more than they are to terrorise, this was shown in the Paris outrage in 2016 where a Sikh allowed a lot of victims to stay in the Sikh temple as refuge. Mosques are just breeding grounds of terrorism and besides there’s a lot of mosques in Canberra and only one Sikh building (not a temple)

Lets hope no one comes here confused and thinks it’s another religion entirely. I’ve read that a huge percentage of Americans can’t tell the difference.

Can't wait to participate in The langar

Yes that's why participation and not eat!

Kunal Chaturvedi that is available every Sunday noon at present🤨

Mark Gledhill - 2 minutes ago
how long will the eucalypt hate continue? this sounds like treescrimination to me! View
Arleen Stark - 1 hour ago
That is all very well Ian, but a branch does not have to be dead to fall. We have had 3 huge branches fall in the last 2 year... View
Colleen Whichelo - 3 hours ago
The trees need to be in the bush where they belong & where no humans reside. Bloody gum trees are the worst most dangerous of... View
News 1

Capital Retro - 31 minutes ago
Good luck with that. I suggest you read up on "social disamenity" from waste odour and commence a class action against the AC... View
News 240

@the_riotact @The_RiotACT
Has your #dog ever become stuck in a toy? A Canberra vet warns it may be more #dangerous than owners realise https://t.co/TJBn419eB7 (17 minutes ago)