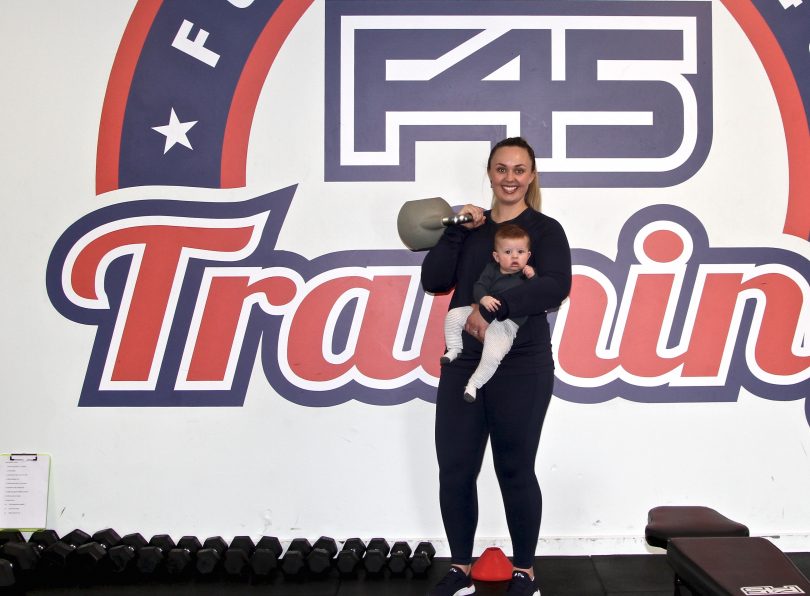 The owner of a gymnasium in Queanbeyan says she is losing customers to gyms in nearby Fyshwick and Kingston because of restrictions on numbers allowed in NSW gyms compared with Canberra.

Despite there being no active COVID-19 cases in the Canberra and Queanbeyan region since the start of July, the owner of F45 in Queanbeyan, Pip De Vries, said she has been turning people away to maintain a limit of 20 people in the gym at any time, even though her usual capacity is 36.

Her sentiments are echoed by gyms such as Body Basics, also in Queanbeyan, who say they are being treated unfairly as people return to gyms to maintain their mental and physical health.

“People have been asking me to put on extra classes so they can support a local business, but they’ve been going to gyms in Canberra where the restrictions allow more people,” Pip told Region Media.

“I’m stuck in this no man’s land where I’ve got to ask whether I continue trying to promote my business or just keep waiting it out for restrictions, which have been in place since the 15th of June, to change.

“I’ve got people wanting to come in for a 5:00 am class, but it’s always on a waitlist, so people just go five minutes over the border to Kingston or Fyshwick. If I put on extra classes at 2:00 pm, that’s not going to help the problem.”

READ ALSO: The year that everything changed

While juggling her business with the birth of her second child at the end of May, Pip kept one full-time trainer on JobKeeper, which also helped her deal with a 75 per cent drop in revenue.

She spoke with NSW Health and Service NSW about the problem and while they were sympathetic, they were unable to explain why she wasn’t able to safely increase the capacity of her gym.

“Gyms have been classified as high-risk and I don’t know why because they’ve never been cleaner. I’m spending upwards of $300 a week on cleaning supplies, which are getting harder and harder to source,” Pip says.

“Until regional areas of NSW, particularly those of us that are so close to the ACT, are considered differently to places like Sydney, then it’s going to keep hurting smaller gyms and other similar businesses.” 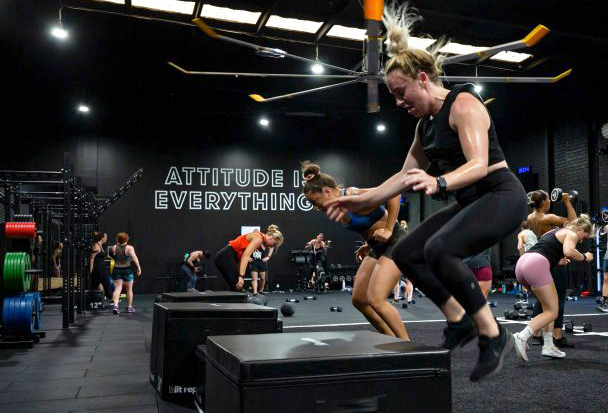 Viva Leisure CEO Harry Konstantinou, who manages the larger Club Lime and HIIT Republic chains in the ACT and the NSW region, said visitations to their gyms today was higher than before the COVID-19 restrictions. He also urged governments to treat regional gyms the same as gyms are treated in the ACT.

“You can’t apply the same rules to gyms in regional areas as in Sydney where people are living on top of each other, so I definitely agree with the sentiments of these gym owners in Queanbeyan,” he said.

“Having COVID marshalls and no 24-hour access in our NSW gyms has certainly increased our operating costs.”

Federal Member for Eden-Monaro Kristy McBain would also like to see restrictions eased within the region’s COVID-free bubble in an attempt to develop more localised COVID-safe plans.

“A border bubble between NSW and the ACT is one possibility,” Ms McBain said. “People like Pip could open her gym in a sensible COVID-safe way but operate on a more level playing field with gyms in the ACT.

“I’ve been meeting regularly with the Cross Border Commissioner and it’s an idea I will raise with his office.”

In Canberra, gyms, fitness centres and boot camps can have up to 100 people (excluding staff) while adhering to the one person per four square metres of usable space applies.

Locally owned gyms such as The Den at Deakin are also doing the heavy lifting of increased cleaning while trying to add extra classes to keep up with the demand from members.

Owners Mick Mackell and Nicole Wellington said their revenue is still down by about 40 per cent and they are spending at least $500 a week on cleaning supplies. 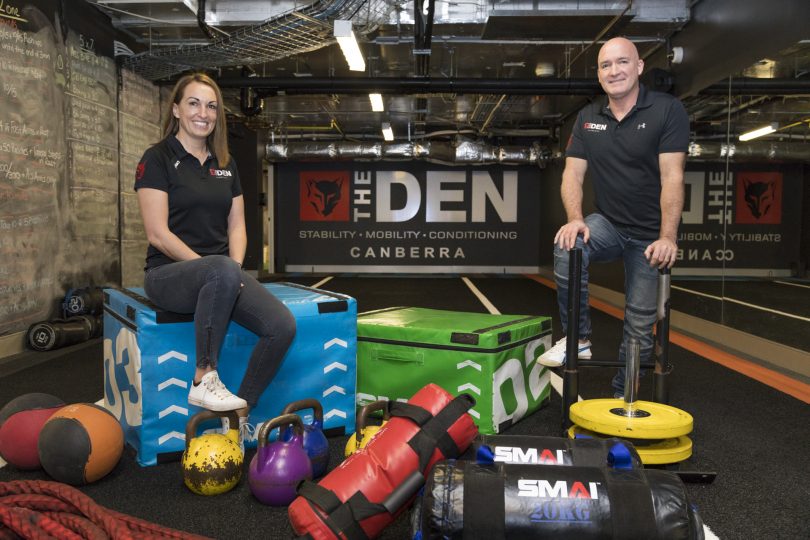 Mick said they have seen a decrease in attendees from Queanbeyan, who worked in Canberra, but are now working from home.

“We were super nervous when we reopened after the shutdown, but we’re starting to breathe a little easier now,” Mick said.

“It’s a shame that the gyms are seen as a potential place for infection when all our staff and members have been doing an amazing job of cleaning and not coming in when they’re sick.

“I think we’re safer than people who go into supermarkets,” says Nicole. “No one comes in here sick, but people still go to a supermarket when they’re sick.”

I’m also a Gym owner in Country NSW and we have had ZERO cases since March. So why are we being treated this way with this stupid covid marshall BS. If the few cases were in regional areas do you think Sydney would be treated the same as us?… I bet they wouldn’t. My Gym can cater for 165 people using the 4 square metre rule, yet I have to employ someone at 6.00 in the morning to supervise the 6 people that are training…like some primary school teacher!!! Gym goers want “their” gyms to stay open and run the way they were designed to…24/7. The Government keep telling us not to hang around in groups. So making Gyms restrict their access hours will make those access hours busier….Doesn’t make sense…

A bit stupid. I’ve been going to the gym for the two months since the lockdown ended. Everybody is back again and there are new people as well. Nobody has caught COVID-19. It seems that NSW is not suffering a medical plague but a plague of bureaucratic red tape and over protective nonsense.

People need to pull their heads in and get on with life.

Being a gym owner, the amount of people who have expressed to me how they are too scared to go to gyms is ridiculous. As an industry, we have always been so scrutinised for cleanliness and even more so now. We need gyms more than ever for mental health. It still blows me away that macdonalds is considered an essential service but gyms aren’t 🤷🏼‍♀️

To understand, all you have to do is look at how fit most of our politicians are. When was the last time you saw them exercising and setting a good example for the community?

The F45 Queanbeyan studio is literally 650m away from the ACT border, does that mean that my risk of getting COVID will dramatically decrease once I’ve travelled 651m? Of course not!

Samuel Gordon-Stewart - 2 hours ago
It should be noted that 2CA is not, as described in the article, a commercial talk station. It is a music station. 2CC is cor... View
Nicholas Love - 5 hours ago
Chris Olsen I appear to be the person that listens to 2ca? Not many in my age bracket it would seem 😎 View
Kat Rothwell - 6 hours ago
Y'all just beige View
Opinion 61

Christina Diana - 4 hours ago
Daniel Duncan yeah I was confused at first too! View
News 16

Ayrton Coll - 5 hours ago
You should laugh, it's probably the more sane thing to do. View
News 44

artismal - 6 hours ago
The poor cousin Queanbeyan is happy to have ACT residents contribute their time, money and effort and to volunteer their time... View
News 24

For 2021, let’s hope for green shoots of healing and growth

@The_RiotACT @The_RiotACT
Planning a trip on the Snowy Mountains Hwy? The road will be closed at night on Brown Mountain for 8 weeks to allow roadworks to take place https://t.co/WfQmALJqmO (5 hours ago)

@The_RiotACT @The_RiotACT
It's shaping up to be another busy week in the capital region, with a little something to keep everyone entertained https://t.co/XzWJbLzkyB (6 hours ago)

@The_RiotACT @The_RiotACT
Belinda Nunn has been lauded for her dedication to her seven children and the community, but now her family faces homelessness as they join the long queue for public housing https://t.co/sZq5Z0XRNE (8 hours ago)