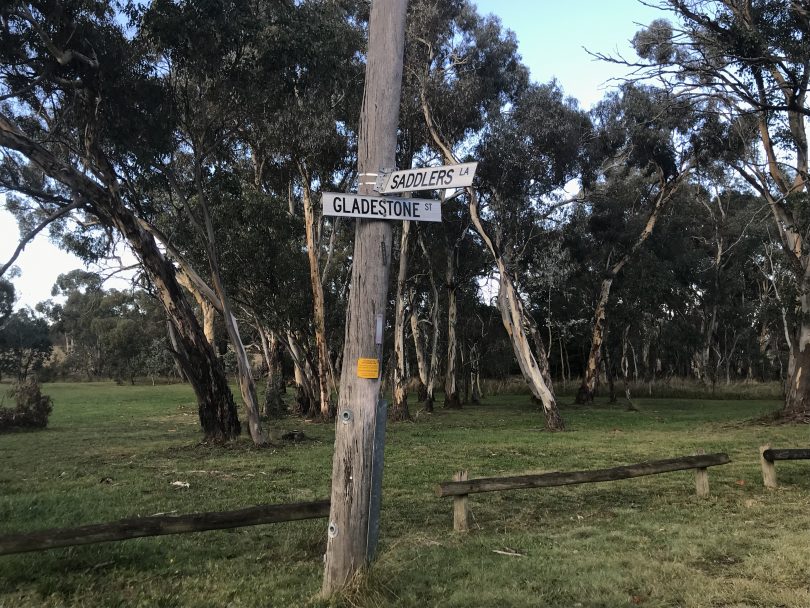 Residents of Hall said their laneways just aren’t up to scratch, and they want something done about it. Photo: Lottie Twyford.

They live only 20 minutes from the city centre, but residents of the 140-year-old village of Hall feel like the Territory Government has forgotten them.

Village of Hall and District Progress Association president Robert Yallop said the basic infrastructure of much of the village is simply lagging behind the rest of Canberra. He notes some of it is from the 19th century.

For example, the seven laneways of the village still do not have a stormwater drainage and street drainage system, despite residents having been calling for this for more than two decades.

In wet weather events the laneways flood and the gravel is washed away, leaving behind patchy potholes and a gravel bank built up at either end of the laneway where the main road is usually found.

Some of the water also comes into properties that back onto the laneways, leading to mould, mildew and flooding. 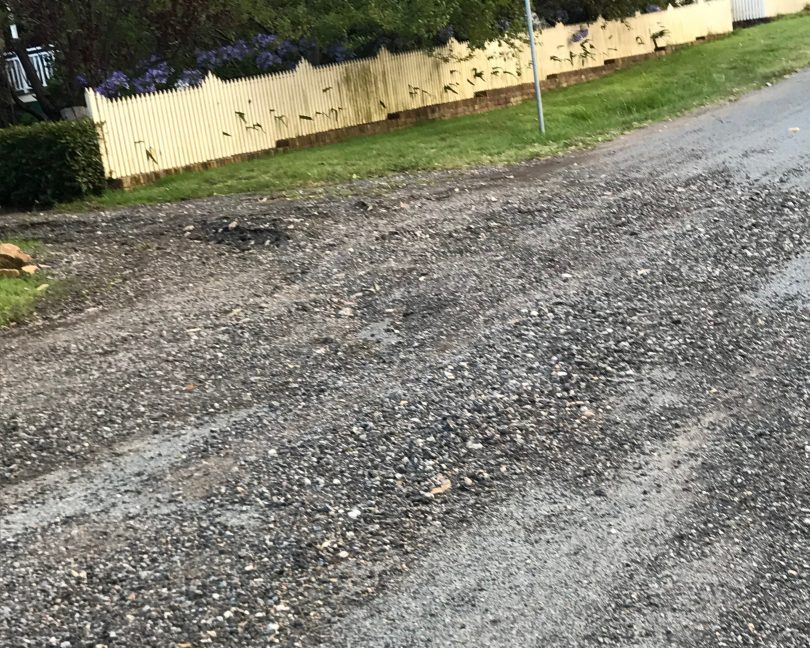 In the aftermath of a storm, gravel has been washed down from the laneway onto the adjoining road. Photo: Olga Minion.

The ACT Government acknowledged the problem back in 2002 in its Hall Master Plan, which identified issues with the erosion of the laneways.

“But nothing has been done by successive local governments … only short-term fixes with periodic regrading of the lanes,” Mr Yallop said.

Mr Yallop has submitted repeated Fix My Street requests but said he generally does not receive a response from government. Instead, he’ll sometimes see a Transport Canberra and City Services (TCCS) crew putting down new gravel on the laneways.

“It’s perplexing because constant resealing of the lanes just doesn’t make any sense. No other area of the ACT would be in a situation where there isn’t any stormwater infrastructure,” he said. 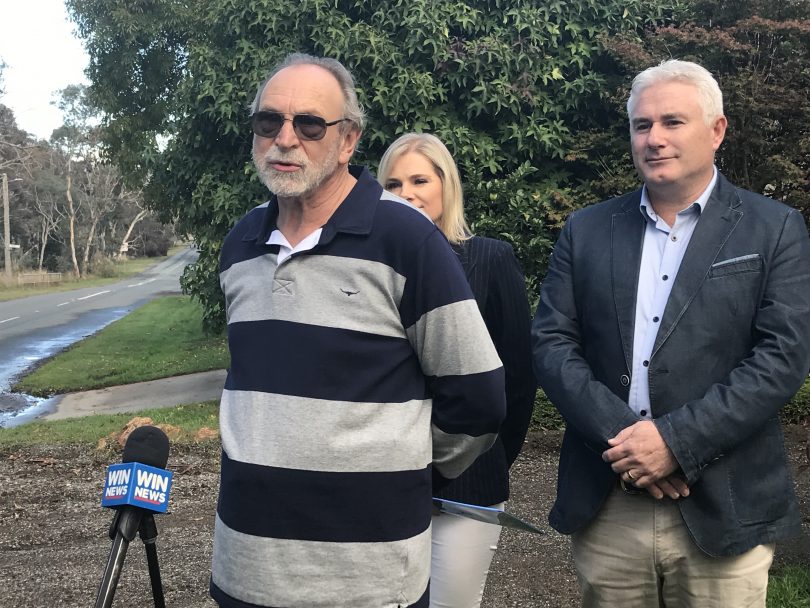 President of the Hall Traders’ Association Shaun O’Connor noted this isn’t always a quick response either and that it often takes multiple requests and calls before a crew comes out to help clean up.

His neighbour and two adjoining properties have flooded repeatedly.

And while many locals take it upon themselves to clean up the mess, Mr O’Connor said this isn’t always suitable.

“Some have done a very good job; others have done a patch-up because that’s all they can do,” he said.

Residents’ concerns are amplified given storms are likely to become increasingly frequent.

As a first step, the Association wants to see a comprehensive assessment of the situation conducted in close cooperation and consultation with Hall residents.

From there, they are calling for the design of a drainage system that would account for the projected increase in storm frequency and severity and the parameters of the Hall Master Plan and Hall Precinct Code.

Mr O’Connor is keen to see the historical and heritage nature of the lanes upheld with any solution put in place.

“I think things could be done that didn’t make them look like a highway up the back of my house, but in saying that it does need substantial repair,” he explains. 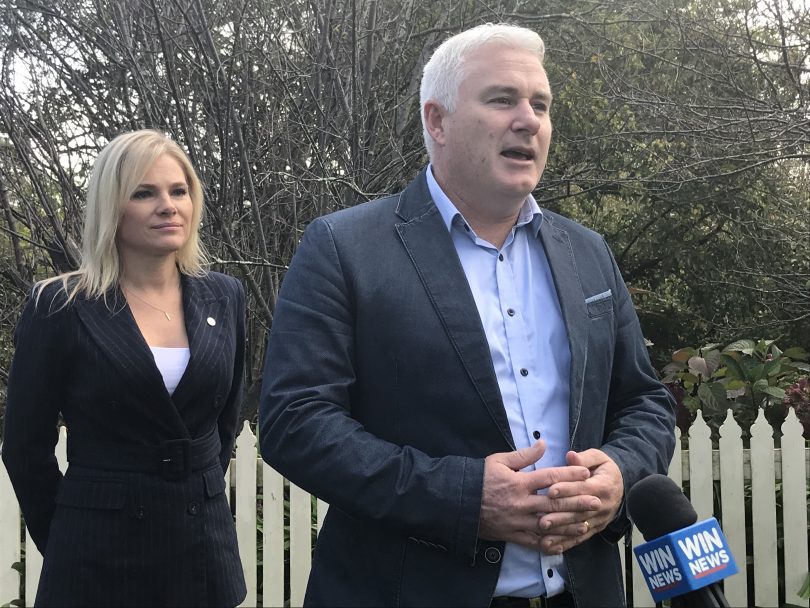 Members for Yerrabi Leanne Castley and James Milligan have heard the plight of the Hall residents and have called on the ACT Government to get involved. Photo: Lottie Twyford.

Opposition Members for Yerrabi James Milligan and Leanne Castley have picked up on the issue and are adding their voices to the chorus calling for a permanent fix.

Mr Milligan described the government’s responses of coming through after a storm and laying down new gravel as ‘Band-Aid’ fixes.

A spokesperson for the ACT Government confirmed many aspects of the township are protected under the Heritage Act, including “the requirement to maintain existing laneways as trafficable areas for vehicles and/or pedestrians, without kerbing and with unsealed surfaces”.

“We welcome continued consultation with the Village of Hall and District Progress Association and the broader community who live and work in the area,” the spokesperson said.

“We have committed to investigating infrastructure upgrades or additional maintenance works which comply within the requirements of the Heritage ACT.”

What about the intersection at the Yass end of town? Years to do what? Do they even work on it? It’s been going for years

I am a social democrat in voting history, but I think Barr’s time is up.

Can’t fix Hall, got a tram to build.

Why did the tram not start at Hall?! FFS

Maybe they could also get the ACT Government to give them street signs with the name spelled correctly: “Gladestone Street”?

Tom Dale how do you know it’s incorrect?

Be careful about drawing attention to yourselves Hall…you’ll end up with a man made lake on the footy ground and a thousand townhouses or apartments with no infrastructure to support it.

I’m sure they had a politician visit just last week, didn’t they? All will be fine.

I love Hall; when I first moved to CBR I regularly visited Hall as I saw a health professional there. I had no idea the residents felt this way and have done for so long. I hope they get some traction of having permanent solutions implemented before this problem begets health problems, and I will call on my local member to ask why successive governments have neglected this issue for so long.