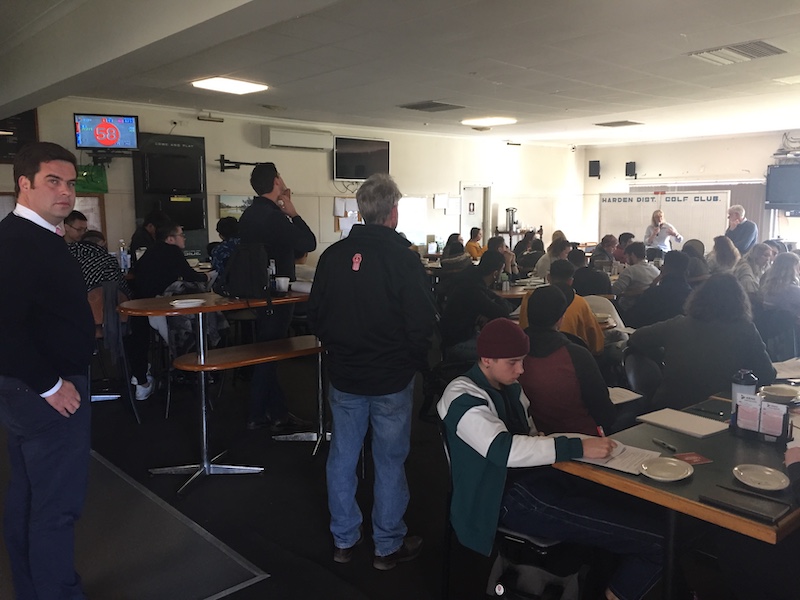 Brimful of ideas, Tony Holland is about to meet 50 architectural students and staff from the University of Canberra visiting Harden.

The chief operations manager for Harden Regional Development Corporation, Mr Holland says an architect designing the new Harden Country Club has invited the students to a briefing session. They are working with a local developer on a new residential development for the community. Mr Holland hopes the corporation’s meeting is the beginning of a long-term relationship between the architectural students and the town, one-and-a-half-hours drive from Canberra.

More than $45 million worth of capital works are either underway or in the planning pipeline for Harden, including a new rural fire service regional training centre, $28 million hospital and $3-$4 million upgrades to recreational facilities from State Government grants.

The new country club is the latest project under the Kruger Trust for a state-of-the-art, family-friendly venue for events. Bequeathed by dentist, the late Geoff Kruger, a generous legacy has funded key infrastructure projects in Harden, including a new medical centre.

“The trustees are committed to using their funds carefully, including a brand-new country club. It provides opportunities that most other country towns just don’t have. It doesn’t mean people can come to town and get a hand out from the trust, it means where there are opportunities for genuine growth, there is a trust that will provide funding for infrastructure, dollar for dollar matching grants, all sorts of things are possible in seeing the community grow,” Mr Holland says.

Hilltops Mayor Brian Ingram and general manager Edwina Marks say the centre provides access to local medical services and visiting specialists, so people in the community don’t have to travel over an hour to see a GP. “There is visiting medical officer support for the hospital. It has provided employment opportunities within Harden,” Cr Ingram says.

Mr Holland says: “The big push for this community is to attract people from Canberra to re-locate to Harden, that is our single biggest push, to see Harden as the friendliest, most welcoming, engaging community in Australia on the doorstep of Canberra.

“If you look at the way the (affordable housing) wave has gone, Murrumbateman, Bungendore, Gundaroo, Yass, which is ridiculously expensive now, the next wave out is Harden and Boorowa,” Mr Holland says.

“We are not talking about 10,000 people moving here. We are saying growth between two and five per cent per year is likely over the next 10 years which will have a dramatic change to the infrastructure in town.” He says five or six families have re-located from Sydney and Canberra in the past six months, and if more people continue arriving, shops, and perhaps artisans will follow, opening a new studio perhaps or a jewellery shop.

A cereal crop-growing and livestock grazing district noted for reliable rainfall, Harden’s agriculture sector is changing into bigger operations with mechanisation replacing farm labour. Mining has become the second biggest producer in the region, including a lime mine at Galong.

Mr Holland says aside from economic activity, professional people are focused on the social and emotional wellbeing of the people within the community. “We want to make sure people understand you are not going to be left behind if you move to a country town, particularly to Harden,” he says.

On the Burley Griffin Way and main southern railway line with passenger train services to Sydney and Melbourne, Harden is not isolated. “It is a strong opportunity for tele-commuting, part-time work, and a tree change,” Mr Holland says.

Proximity to the national capital became even more apparent last October when the annual Harden kite festival attracted more than 8000 people, more than double the previous year, with Canberrans making up most of the visitors.

Coming from the not-for-profit sector in Canberra where he had worked in mental health and chronic disease, Mr Holland was drawn to the opportunity to help Harden grow. “The more I become aware of what is possible, the more excited I become. I am a real advocate for rural Australia,” he says.

“People live in capital cities for all sorts of reasons. But the cities are bursting at the seams, we have so much potential in places like Harden, Young, Boorowa and hundreds of other towns. If we build a community that is known far and wide that is the most engaging, friendly welcoming place you could go, why wouldn’t you want to move here? Once people know that, once land is available, and we create some jobs, which I think will happen, then people are going to flock to come here.”

I know that frame!

Chloe Silk Maddie Banks!!!! The back of my head!!!

Maddi Lee omg I have a famous friend 🤩🤩

I had the best garlic bread EVER at the Harden pub! Happy memories Georgia Watson Amanda O'Neill ❤️

Amanda O'Neill I haven’t been back unfortunately

Amanda O'Neill, smiling, he was rather gorgeous 😊

It's also on the rise as an up and coming bicycle tourism destination and with some great cafes :)

Went to Harden primary school in the 60’s. love the Honey Pot shop in Murrumburrah.

Awesome place, I moved here a year ago

Shari Jensen, not sure where this photo was taken but if it was in the pub they’re gonna be waiting ages for their Schnitty!! Jean

Born there and loved it only moved away for work, Harden-Murrumburrah. Narelle Knox

Gillian Southwell I know hay :) I was just reading out the great write up to Jeff Knox xx

My mum was born there. Maybe it’s time for a tree change 🤔

Very pleasant. I used to live in Young in the 90’s, drive over for a pleasant weekend day out. Also Terracotta restaurant. A dinner there I recall as one of the most delicious I’ve ever eaten.

Trish Roberts I agree about the Terracotta, we used to go from Grenfell to eat there, excellent food and service

I’ve been getting food flashbacks - I think hazelnut icecream featured in there somewhere.

I’d never even heard of Harden before I started working on the Melbourne to Sydney XPT. I was surprised how big the town was and how impressive the railway station was. A grand old building!!

Gotta get through Murrumbateman first ....🤣🤣🤣 #boomboom

Some of the best coffee shops in both of the twin towns. So many country towns do this well.

Malcolmo Oz - 9 minutes ago
Trudy Jane Even worse Jane (and Betty) - many have never even come here!! View
Trudy Jane - 9 hours ago
Betty Starbux most people who criticise Canberra have never even lived there View
Joanne Hillermann - 10 hours ago
Well done Marg! Congratulations on your awards. I loved listening to you on the radio about quirky archives stuff. View
Opinion 94

Shannon Lister - 33 minutes ago
Michelle Brown your famous. View
Annabel Dobson - 39 minutes ago
That’s simply not true. You can see very clearly the damage Brumbies are causing when you ride through KNP. We know scienti... View
Sandy Moore - 10 hours ago
Hmmmmm so a lot of calls to eradicate the horses that were introduced and are not native to this land because of the damage t... View
News 28

Last year's legislation to make life easier for renters is having unintended consequences, including higher rents and an even tighter rental...
Community 37