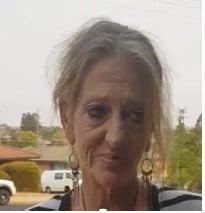 NSW Police fear for the welfare of a missing Queanbeyan woman and are appealing for public assistance to locate her.

The family reported her missing to Monaro Police District officers, which established Strikeforce Kadigal to investigate the circumstances surrounding her disappearance.

Police believe Julie went to the Queanbeyan Leagues Club around 11:00 pm on Christmas Eve, where her movements in the lobby were captured on CCTV cameras. She left a short time later.

She was wearing a black top with what appears to be green around the back, shoulders and neckline, dark coloured pants and a black or grey checked top wrapped and tied around her waist, and sandals or thongs.

She was known to live in the Queanbyean and nearby Karabar areas.

“Police have conducted extensive inquiries with the aim to find out what happened to Julie, and we are now appealing to those in the community who may have vital information,” he said.

“If anyone has information about Julie Moore’s whereabouts, or has seen her since Christmas Eve, then we want to hear from you,” he said.

Anyone with information about Julie Moore’s disappearance is urged to contact Queanbeyan Police Station on 02 6298 0599 or Crime Stoppers 1800 333 000.