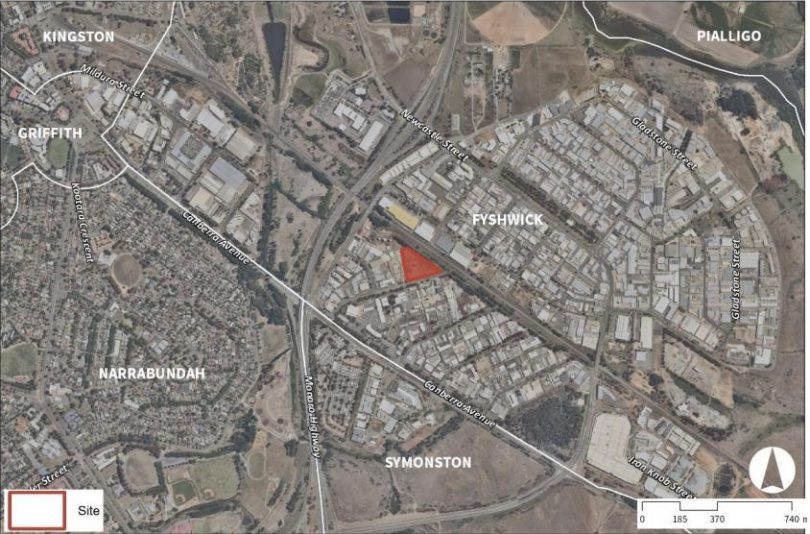 Another recycling proposal for Fyshwick is causing sparks to fly with community and business concerns about air pollution, noise and heavy industry creep in the inner south.

Adam Perry’s Access Recycling, a part of the Capital Recycling Solutions consortium planning to develop a waste processing facility on Ipswich street and a recently approved rail freight terminal, wants to upgrade its metal recycling facility next door in Lithgow Street with three new processing machines for crushing and cutting of scrap metal and separating of metal from waste.

It is the latest in a series of proposals for the area bound by Ipswich and Lithgow streets and the rail line that has alarmed some of its business neighbours and the inner south community, and also brings the intensification of use potentially into conflict with the Molonglo Group’s ongoing mixed-use urban renewal development along Dairy Road and urban infill in neighbouring East Lake.

Allbids CEO Rob Evans, whose premises are in nearby Wiluna Street, said Fyshwick businesses would be organising themselves into a new body to lobby government as a result of the multiple recycling proposals and the drift towards heavier industry in the suburb.

He said businesses wanted to know what the planning strategy was for Fyshwick, saying there was a lack of leadership from Planning Minister Mick Gentleman.

Mr Evans said he understood Access Recycling wanting to grow its business but he believed surrounding businesses would be affected, mainly by the inevitable increase in heavy traffic, which would be multiplied if the main waste facility went ahead.

“If you look at the IZ2 zoning it’s all about mixed use and helping each other out and collaborating and you don’t get a better example of businesses that collaborate than what’s happening at Dairy Flat Road and the wonderful development that’s been set up there with breweries and other businesses that feed off each other, and that kind of thing’s happening all over Fyshwick at the moment but the one spanner in the works is that the Government is thinking of allowing a major recycling centre,” he said.

A drawing of processors to be set up on the Fyshwick site from the development application.

Inner South Canberra Community Council chair Marea Fatseas said the recycling proposals were raised at a public forum about urban infill on Tuesday night where a motion was passed calling for an independent review of CRS’s Environmental Impact Statement for the proposed waste plant to examine any potential health impacts.

She said that given the number of public representations about the EIS, which is still being assessed, the meeting believed there should be an independent process similar to the one for the aborted Hume waste to fuel facility proposal.

She said there seemed to be a planning conflict between future urban infill at East Lake and allowing heavier industry at neighbouring Fyshwick.

“The question is what is the Government’s plan for that area – are they really thinking about putting more people along that corridor?” Ms Fatseas said.

She said there needed to be a more holistic approach that was fair to all parties. “We expect the Government to provide a policy framework that will provide greater certainty for both industry and the community about where it’s appropriate to put what kind of development,” Ms Fatseas said.

Access Recycling’s development application says the proposal will have environmental and economic benefits, with limited traffic, noise and dust impacts. Although the proposal expands the use of the site, the DA says the overall volume of scrap processed will not increase. A wall will mitigate noise and there will be a hardstand and vacuum technology to prevent dust and windblown debris, it says.

So, people have an issue with industrial activity in one of Canberras designated industrial areas?

Rollersk8r1 - 21 minutes ago
Quite happy as a GWS member. In normal times it’s an ideal arrangement. Four games a year at Manuka (1 pre-season), plus AF... View
Ben Jones - 2 hours ago
No one will go apart from the die hard fans. Until they start winning and the whole of the ACT become fans overnight. View
Opinion 197

David John Hourigan - 25 minutes ago
John Slow too many round abouts...! View
Matthew Robinson - 10 hours ago
Would be great but no way the government would support it. View
Opinion 20

Acton - 9 hours ago
"Chief Minister Andrew Barr said he accepted that having no deaths may not be possible" Of course it is not possible to have... View
Mike Diy - 10 hours ago
How dare he be a competent politician. What kind of example will this be for others? View
kenbehrens - 10 hours ago
Sam, did you recently hear of the local Covid positive female who was charged drink driving? In addition to not isolating, sh... View
Breaking 86

Wini Harrison - 10 hours ago
I was too bizzy watching movies. View
Julie Macklin - 10 hours ago
Of interest, I found this reference to an early earthquake in Melbourne. Apparently in March 1837 Governor Bourke paid a visi... View
Robyn Patricia Walter - 11 hours ago
I thought “geez that garbage truck is coming down the street a bit too fast”. It was a few minutes later when there was n... View
show more show less
*Results are based on activity within last 7 days

@The_RiotACT @The_RiotACT
After 40-odd days of #lockdown, the novelty has worn off and many of us are struggling to maintain the lockdown behaviours we were once diligent about. Zoya Patel asks, are we becoming too complacent about the #COVID rules as lockdown progresses? https://t.co/ilgv6BzSgO (46 minutes ago)