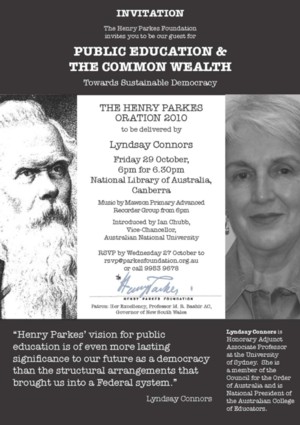 Tonight the annual Henry Parkes Oration is on at the National Library, 6.30pm, and it’s free: http://www.parkesfoundation.org.au/

The importance of public education as a fundamental building block of a sustainable democracy is the theme of the Oration, to be delivered by Associate Professor Lyndsay Connors. She will argue that Henry Parkes’ vision for public education is of even more lasting significance to our future as a democracy than the structural arrangements that brought us into a Federal system.

The oration will be introduced by Professor Ian Chubb, Vice-Chancellor, Australian National University.

The Henry Parkes Foundation is a charitable trust established in 1998 with the aim of promoting public understanding of Australia’s constitutional structures and political systems.

The Orations are held each year around the anniversary of Parkes’ famous Tenterfield Address in October 1889, which played a key role in setting the Federation movement in motion.

Adrian Evans - 2 hours ago
All the best GT. Look forward to more day at the cricket together View
Phil Small - 20 hours ago
One of the best and nicest guys ever.....cheering you on GT. View
Marcia Bowden - 23 hours ago
Glen, sending positive thoughts x... View
Community 44

Stephen Saunders - 8 hours ago
For me, the right kind of war memorial is the sober VC plaques, all along the highway to Sydney. Close down the Afghan exhibi... View
Opinion 51

Valerie Foster - 8 hours ago
Too many speed changes in too many areas. It is revenue raising. View
HiddenDragon - 20 hours ago
An overly literal (or, perhaps selectively so) approach to the application of the criteria for different speed zones might ha... View
David Brown - 21 hours ago
Clinton Berry I don’t know of any accidents in the last decade. View
Lifestyle 1

Kathy Schneider - 20 hours ago
One of the highlights of the year! View
News 12

Robert Hawes - 23 hours ago
Robert Knight Agreed. It would be hard to make a good bus route though the suburb as it is isolated. Would be better if they... View
News 17

Jenny McInnes - 24 hours ago
Angelo Turcin Dr Encrico Taglietti designed the cinema and he won the Australian Arctetects Gold medal in 2007. Clearly you a... View
Trish Roberts - 1 day ago
Thanks, Andrew! You would certainly know. View
Lifestyle 1

Lynn Stape - 1 day ago
so great. I was not aware they had a shop. Some really nice things for sale. I love the postcard for Gungahlin with the light... View
show more show less
*Results are based on activity within last 7 days

It's a hoarder's dream and a librarian's nightmare. Thousands upon thousands of books in boxes that either need to be...
Opinion 20

It's taken 166 concrete bridge segments, but the last one was finally placed on the new Batemans Bay Bridge on...
News 56

As summer approaches, ACT police are warning us that more Canberrans than ever have been caught speeding. They say, rightly,...
Best of Canberra 44

Senator Zed Seselja has brushed off a challenge for the Liberals' No 1 spot on the Senate ballot for the...
Food & Wine 23

Things are about to get a whole lot cooler in Dickson with the opening of Spilt Milk Gelato Bar today...
Property 156

The superb green 16.18 hectares of pasture at LouieLou at 57 Vaughan Drive in Sutton, the residence, cottage and facilities, are possibly the...
Community 21

@The_RiotACT @The_RiotACT
Canberra's restorative justice scheme has achieved a 98 per cent satisfaction rate since its expansion two years ago https://t.co/F8Bt1MV7gz (1 hour ago)

@The_RiotACT @The_RiotACT
Ever thought of playing netball but didn't know where to start? The Gungahlin Jets are holding a come and try day. Here are the details https://t.co/Vkmhthmi3n (2 hours ago)

@The_RiotACT @The_RiotACT
Helen Miller has been delivering meals on wheels in Queanbeyan for 40 years. Find out what drives her to make sure no one goes hungry https://t.co/QgnU3XWTpm (3 hours ago)