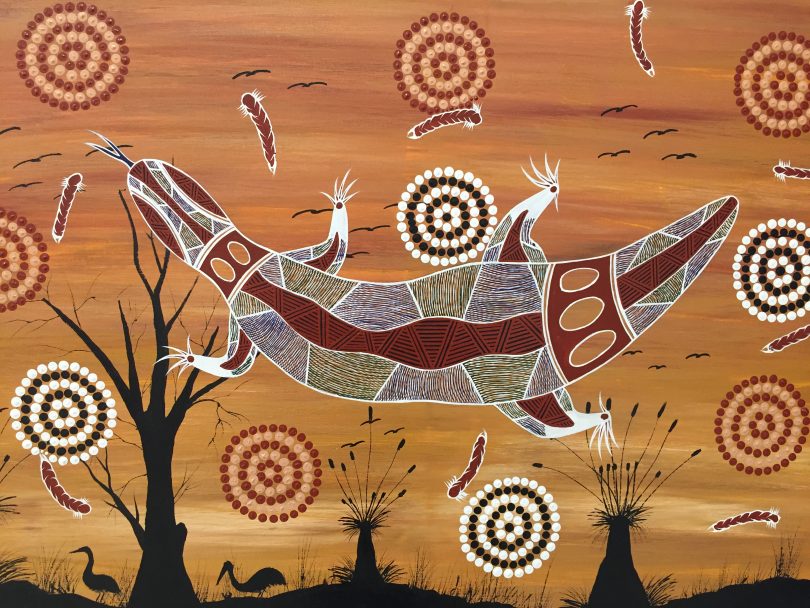 Tuggeranong Arts Centre is hosting Reconciliation from the Inside, exhibiting works from the Alexander Maconochie Centre detainees. Photos: Supplied.

TK is one of the 23 per cent of the Alexander Maconochie Centre’s Aboriginal detainees. He acknowledges his life is sometimes “chaotic” outside the jail, and describes himself as “broken” after a childhood spent bouncing between foster homes from the age of two. Now, painting is changing his life.

He’s part of Reconciliation From Inside, an exhibition of artwork by Aboriginal and Torres Strait Islander detainees from the jail being shown at the Tuggeranong Arts Centre to celebrate National Reconciliation Week.

David Witham is the Indigenous Services Coordinator for ACT Corrective Services and oversees the transfer of the arts and culture program inside the AMC. He explains that there’s been an art outreach at the jail since it opened. Detainees can take part in art and music education on a fortnightly basis and work on their art in their spare time.

“These guys are not always particularly connected to culture and this is one way of reaching them,” he says. “It’s also part of their of healing process through doing something meaningful and connected to culture. We see some really broken lives in here. All of the detainees need healing, but the indigenous cohort has a unique historical perspective.” 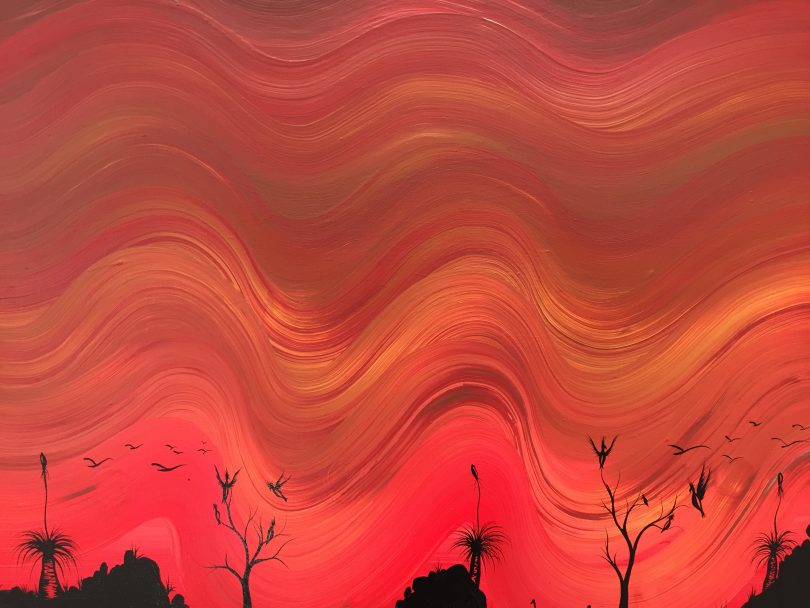 Reconciliation Week is being marked by the exhibition, which runs until June 1.

Witham says that the art practice creates fellowship among the detainees that extends to conversations about family, their background and their journey through the criminal justice system. Detainees are also given the chance to connect with their genealogy through IATSIS.

Completed artworks can be stored with the property that detainees take with them on release, gifted to family members or put up for sale in the electronic art gallery. The 40 works in the Tuggeranong exhibition come from the gallery and Witham says detainees are encouraged to use any money they receive to help out their families, “who are often doing it tougher on the outside than they are”.

TK began painting while in jail in NSW and admits he’s often struggled to cope with life outside. He’s a Wiradjuri man, and art has also inspired him to find his family and discover who his mob are. He’s worked with Winnunga Nimmityjah Aboriginal Health Centre to track down his grandmother and cousins.

“My totem is goanna, and I recently did a painting story about finding my indigenous heritage as a man who is fair-skinned but black at heart,” he says.

“I definitely feel like I’m getting somewhere. When I’m entrenched in my art I’m a totally different person. I’m not that same person as I was, I’m a very calm and respectful giving person. Doing my art grounds me.”

TK says that receiving recognition for his efforts from prison staff also gives him a sense of achievement that he’s never had outside. He has half a dozen works in the Tuggeranong exhibition, including a piece about reconciliation, “blackfellas and whitefellas working together”.

David Witham says he often sees the same results among detainees in the art and culture transfer program. “It satisfies a lot of needs to keep busy, to keep sane, it gives self-respect and achievement, and self-worth. Detainees tell me that they get in the zone and feel they’re not in jail.

“The challenge for me and my team in the AMC is to have people like TK translate their positive attitude and productivity into the community. It’s his decision about how he lives when he’s outside but we can put him into a supportive framework. We never give up on people like TK.” 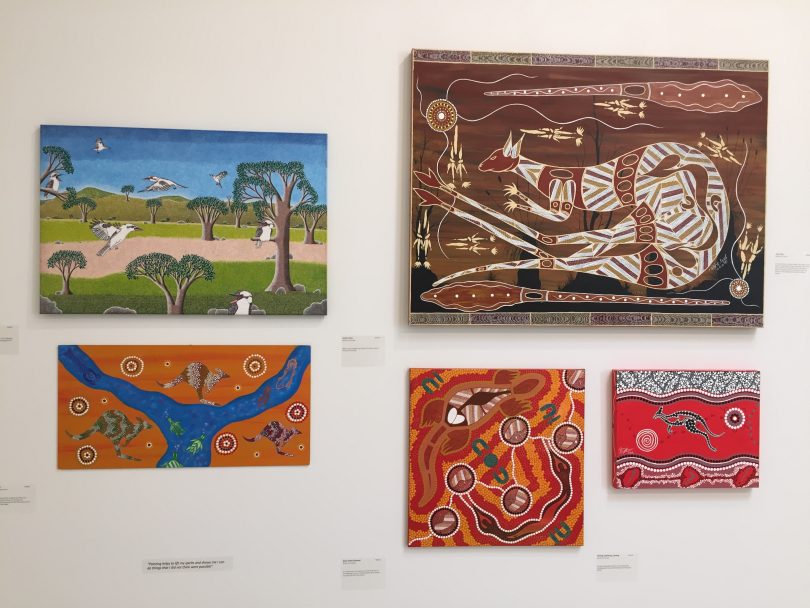 40 works have been selected from the AMC’s online art gallery for the exhibition.

The Arts Centre’s CEO Rauny Worm says art can teach us about our shared histories, cultures, and achievements and explore how each of us can contribute to achieving reconciliation in Australia.

“Once again this exhibition highlights that art is about more than artistic skill development, it is a tool for transformation and healing. Tuggeranong Arts Centre is delighted to present Reconciliation from Inside and invites the community to share this special exhibition and reconciliation week reception, ” Ms Worm said.

And TK is pretty pleased about being in the Tuggeranong exhibition too. “Generally I put my soul into my art and I’m glad that people have really taken notice of that because it means the world to me,” he says.

Reconciliation from the Inside is at the Tuggeranong Arts Centre until June 1. The ACT will mark Reconciliation Day on May 27 with a public holiday and free event in Glebe Park.

Rob Thomas - 26 minutes ago
But its what we do best! View
Pusongha SD - 33 minutes ago
Fad going to fade View
Andrea Mya Riboust - 1 hour ago
Hate to say it but people being idiots was always going to happen, the events of this year alone are proof. I love Canberra a... View
News 9

Julie Macklin - 1 hour ago
Go tell him that. He wins; that's all that matters to him. View
Mac John - 2 hours ago
And it’s time for senator Seseljs to get out of politics View
Jason Ezra - 3 hours ago
A move to prevent an alternative emerging in light of the election result. And some think they care what the electorate actua... View
Property 2

Sue Davies - 3 hours ago
Good luck on your new adventure to you and your family View
Rosemary Rummery - 4 hours ago
Awesome news Canberra is so lucky to have Dr Nick make this his home . Such a nice sole and here’s hoping that his kindness... View
Natalie Gresham - 5 hours ago
Good luck with that 🤬 View
News 5

Guy Hosking - 3 hours ago
The Eugowra line provided the setting for the final shootout in the episode of Inspector Morse set in Australia. Closed short... View
Opinion 21

chewy14 - 3 hours ago
Ssek, I'm glad you asked. The answer is lots, specifically because it's so easy to tailor your finances around receiving the... View
ssek - 4 hours ago
Yes, a couple on the pension CAN own a home and have up to 876k in assets. How many do you realistically believe to be in tha... View
News 26

Kytie Mclign - 5 hours ago
Margaret Freemantle Maybe, but she was one of the Liberal Party's few Chief Ministers. View
show more show less
*Results are based on activity within last 7 days

@The_RiotACT @The_RiotACT
An L-shaped floating pontoon will be delivered as part of the Batemans Bay Bridge replacement project https://t.co/dAQdoMPvzT (31 minutes ago)