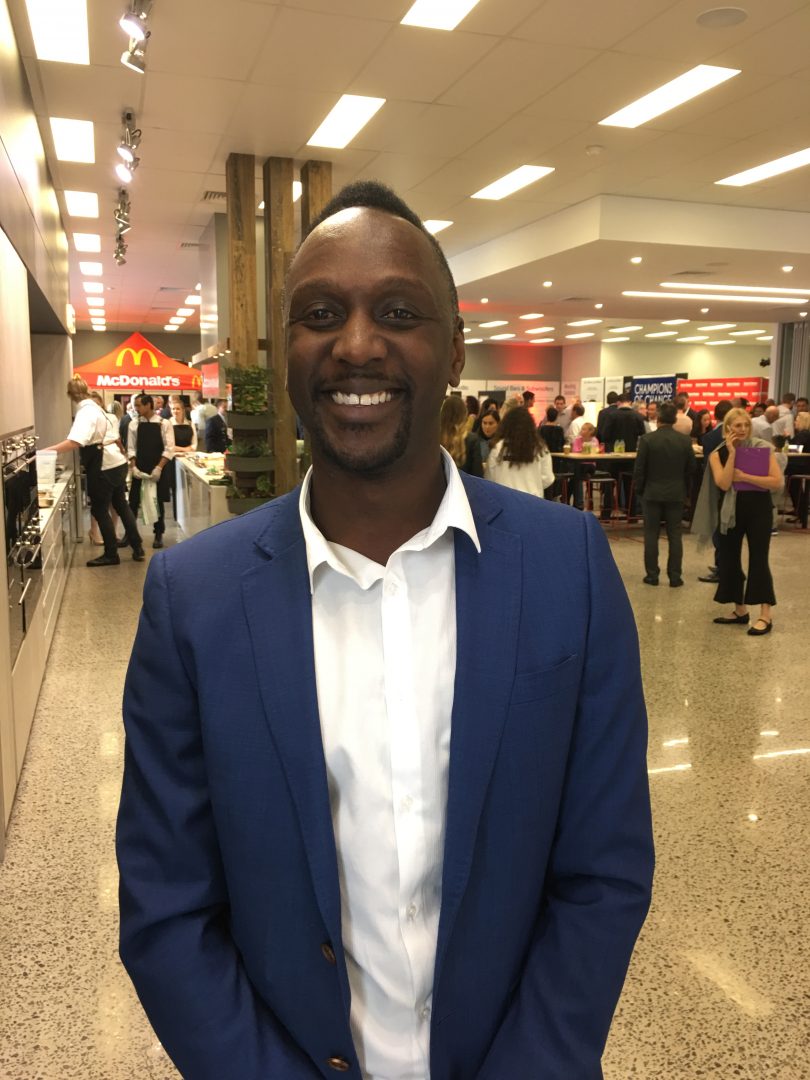 Francis Owusu has a vivid recollection of the time he told his wife that they would have to sell the family home to secure the future of his charity.

His fledgeling charity, which started as a dance program to help empower young people, had grown to a point where it needed an injection of funds to keep it going.

Francis, the son of Ghanaian parents, encountered racism growing up. He was able to turn his life around through dance and after moving from Melbourne to Canberra, he was determined to share his experience with others by organising after-school dance classes.

He founded his charity Kulture Break with eight kids in Lanyon in 2002. Six years later, the numbers had grown dramatically, but there was little money coming in.

In 2008 he started that difficult conversation with his wife, Susie, about selling their home to fund the growth of Kulture Break. This was to allow the charity to cater for the growing number of young people struggling with their place in the world. Francis says his wife was remarkably positive about the proposition, “She was very supportive. She looks back now at where we have come from to where we are now and she thinks it’s great.”

“I sold my house to support Kulture Break and at the time it was very scary. But it’s been rewarding, and the personal sacrifice has really paid off,” says Francis. So far, 150,000 teenagers in Canberra have had an involvement in the charity.

The growth in Kulture Break hasn’t been confined to the numbers of teenagers utilising the program but also in the maturation of the services the charity provides.

No longer is the sole focus on dance, but the program still focuses on empowering young people using performance arts. Mentoring and inclusion play a major role in transforming individuals with depression, anxiety, suicide, drug and alcohol abuse, social isolation and childhood obesity.

The goal of Kulture Break is to provide young people with a safe environment in which they can not only express themselves but also encourages every individual to develop self-belief.

Canberra, despite its affluence and sometimes perhaps because of it, has social problems that result in teenagers feeling marginalised.

Francis tells the story which best describes how Kulture Break has transformed lives. He said he was in the Apple Store getting his broken phone fixed when the young man serving him realised who he was. The young man approached Francis and explained that had depression and suicidal thoughts while he was in high school but his life turned around from the day he became involved in Kulture Break. He said he hadn’t had a suicidal thought since.

Another teenager with dyslexia believes that it was through involvement with Kulture Break that C grades at school, rapidly turned into Bs!

Despite the success stories, there is still a high rate of youth suicide in Canberra. Francis says three weeks ago, Kulture Break was hit with the tragic death of a young woman. If nothing else it is a reminder that there is still so much work to be done to empower young people in Canberra.

Francis says his plan is to progress Kulture Break even further with a focus on higher education and employment opportunities for young people.

As to the family home for Francis, Susie, and their three kids; there is some good news to report. Francis explains, “Two years ago I was able to buy a family home again. It has taken us almost a decade to be in a position to buy, and so it was a big relief to my wife and kids that we’ve got a home. I don’t regret the original sale. It’s been tough but it has been worth it because of the benefits to kids and the community.”

George Watling - 4 hours ago
A recent OECD review of 300 Urban Planning studies from across the world has demonstrated that increasing the compactness of... View
George Watling - 5 hours ago
This story is not based on evidence or research. Higher density planning policies have been driving up property prices around... View
chewy14 - 7 hours ago
BJ, $2500 in rates is a block value of around $340000, you aren't talking a cheap piece of property. The rates are set based... View
News 1

chewy14 - 6 hours ago
And the m9ney is going to be completely used up in one day. Honestly, this is beyond a joke how incompetent the ACT governmen... View
News 18

Lauren Kay - 7 hours ago
I was gutted when I found out Ash. Nigel was so lovely and it feels like I knew him forever. View
Ashleigh McHugh - 8 hours ago
Lauren Kay isn’t it so sad... View
Lauren Kay - 8 hours ago
Drew Forrest I've got a condolence card, but happy to put more cards in a larger envelope if you or anyone up your way wants... View
News 6

JC - 10 hours ago
Depends how you define better. Again hindsite is wonderful. But those who did get in early wouldn’t have agreed with you if... View
JC - 10 hours ago
Supply has been the issue since day dot. What annoys me is how the federal government has spun it all. The issue was they bac... View
News 7

Hoppingmad - 10 hours ago
I can’t help but agree with those who have pointed out that Liberals talking education, when they pump money into independe... View
Food & Wine 21

@The_RiotACT @The_RiotACT
Photographer Sammy Hawker's engagement with the environment has created beautiful images that use salt water, rain and earth to evoke a changing world https://t.co/9oVmYTwl62 (6 hours ago)

@The_RiotACT @The_RiotACT
Loveable goofball Rocco and sweet rabbit Waffle are waiting to find their perfect match. Think that could be you? @rspcaact #PetsoftheWeek https://t.co/RqlUzgo7Dg (8 hours ago)

@The_RiotACT @The_RiotACT
The owner-builder of this dream home designed it for his family. He thought of everything, down to the last detail - and it shows https://t.co/HCmMwgOhgf (9 hours ago)