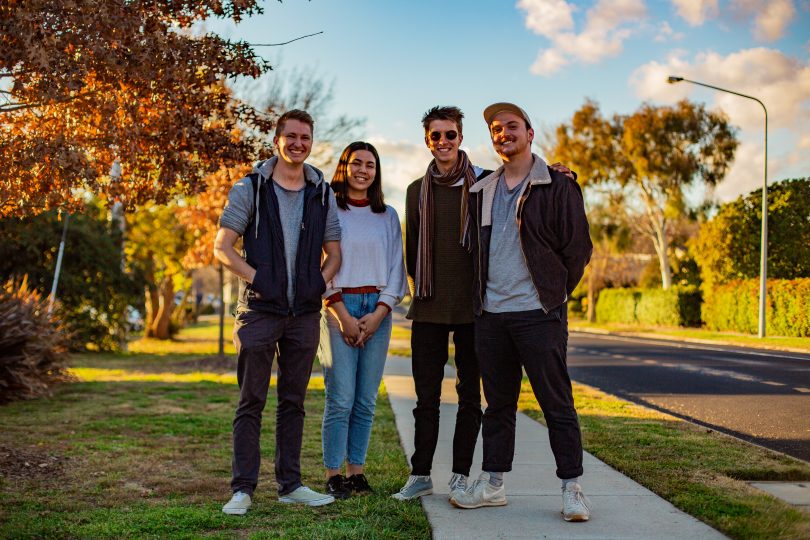 Having completed their apprenticeship playing small gigs around the nation’s capital, ARCHIE is primed and ready to take the spotlight.

Since bursting onto the scene in July, the bubbly foursome have been going about their business – not-so-quietly – garnering a following wherever they go.

The band is now launching their first single Stranger Danger at Transit on Friday night (8 November). The song is a warning about the dangers of talking to strangers, even though the band refuted that caution when selling tickets and merch on the ANU campus.

The band was spotted on several occasions in the Kambri precinct talking to passersby, the ultimate speed dating to convince strangers they are the ones they should spend your Friday night with.

“A girl came up to us and we told her about the band but she left without buying anything,” Geromy shared with a grin. “Then about 10 minutes later she came back and said ‘I just listened to your track and I reckon I’m going to buy a ticket’.

“That was a good feeling.”

Stranger Danger was the very first song the group jammed together 12 months ago, and the lyrics came from Grant’s experience of unwanted visitors.

“I had this experience when someone came knocking on my door and they tried to push their agenda on me,” Grant shared. “The whole situation felt weird. I had never met these people before but somehow they managed to make me feel bad for not seeing the world through their eyes.

“On the deeper level, people tend to come calling and knocking on your door when they want something from you or when they have an agenda to push. It’s a warning about where you place your trust.”

The launch is the next big step for the energetic group, symbolised by Grant’s A4 piece of paper full of ideas.

“A month ago, Grant came to us with a sheet of things that he wanted at the single launch,” Xandy recalled. “It was at a meeting and we were wrapping up and then he brought forward a document about what he wanted the launch to look like.

“We have tried to do as much of them as we can but there are limitations to what we can do. The rest of it we can keep in our back pocket for another show.”

Despite the group’s palpable enthusiasm, the band is doing their best to keep the expectations in check.

“We have to keep reminding ourselves that it’s our first real show,” Liv said. “We have a lot of people coming to our show who haven’t seen us before, so this is our first chance to show the hype is legitimate.

“We are going to have fun on stage and if we can help the crowd have fun too, then that would be awesome.”

JC - 57 minutes ago
So true. It’s far easier to whinge about anything and everything. Though think the core issue is many here just don’t lik... View
Jay Bee - 4 hours ago
I cannot believe the negativity on this site. So many critics, and not a constructive suggestion between them. What is there... View
bd84 - 4 hours ago
Another Barr Government “we’ll just stick it here” project. They’re closing off Callum street and effectively putting... View
News 2

franky22 - 1 hour ago
Well I for one will not miss them. I lived in Sprent St & found the peacocks annoying. They are an invasive species just like... View
ChrisinTurner - 2 hours ago
Residential streets should be 40 km/hr or even the European 30 km/hr, now that 40 km/hr is being applied to parts of Northbou... View
News 8

Capital Retro - 2 hours ago
Home batteries generally are duds: https://www.solarquotes.com.au/blog/battery-test-centre-reports/?utm_campaign=sq_news_week... View
Ol L - 4 hours ago
Interest free but still a loan. And who would want a second hand EV given their finite batteries? And yes I do own one. View
bryansworld - 1 day ago
However, this would create a signal for new suppliers to enter the market and undercut the original ones who are trying to go... View
Opinion 8

chewy14 - 6 hours ago
Dolphin, The Greens will never be a realitisic alternative whilst they refuse to deal with reality when determining their pol... View
dolphin - 18 hours ago
its not hard jwinston, just look at the libs and you understand why. they are just too socially conservative for most of us.... View
HiddenDragon - 19 hours ago
"....The question now is making it work and be accessible to as many Canberrans as possible..." No, Zed, the question is and... View
News 31

Kristine Evans - 15 hours ago
Andrew Barr Then you need to let parents into schools before this happens. View
Christopher Marlowe - 17 hours ago
Jenna Vdv that's why HECS/HELP exists View
Rod Phillips - 18 hours ago
I'd like to see a bit more planning and less guessing all round! We've seen the impact of poor quarantine procedures through... View
Community 1

Police have confirmed that a 34-year-old who died in a Page house on Saturday was stabbed to death, and a...
What's On 0

My stretchy pants are on and my stomach is empty. Two things I highly recommend before visiting The Hungry Brown...
Breaking 0

The Senate has narrowly passed a bill to merge the Federal Circuit Court and Family Court of Australia into a...

The ACT Government has rejected the recommendation to widen the fire break between the park and neighbouring rural landholders as...
News 8

@The_RiotACT @The_RiotACT
European wasps are on the move into the wall cavities and roofs of homes across Canberra with a swarm of calls to a hotline prompting a warning to be on the lookout https://t.co/TOZc6IUCCn (1 hour ago)

@The_RiotACT @The_RiotACT
Canberra got a little brighter and more animated last night thanks to the Enlighten Festival - the first big event since the pandemic. Find out why this year's festival is more Illuminating than ever https://t.co/VgOcSDUzVk (4 hours ago)