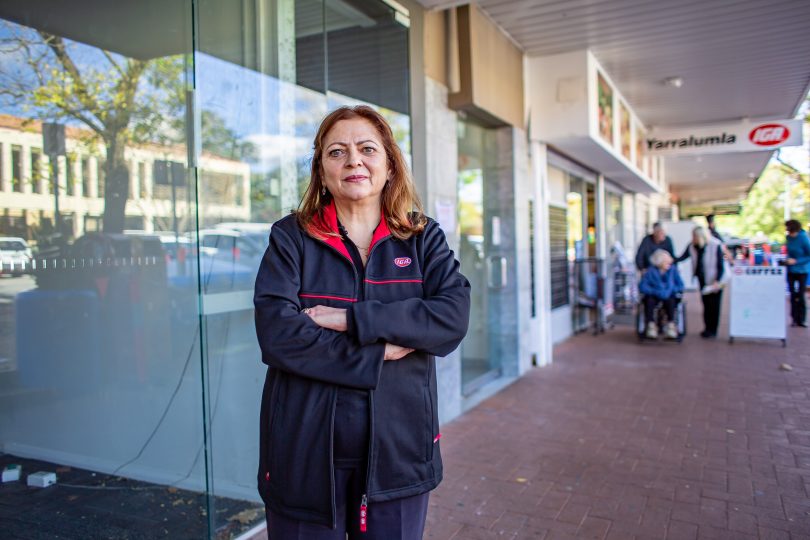 Yvonne Dourdoulakis outside the premises next door to the IGA Supermarket, where a Jim Murphy Cellars liquor store is planned. Photos: George Tsostsos.

Jim Murphy Cellars’ bid to open a liquor store at the Yarralumla Shops is hard to swallow for IGA/Local Liquor Supermarket owner Yvonne Dourdoulakis, not just because she will have a rival next door but because she fears for the future of the struggling suburban shopping centre.

Jim Murphy Cellars has applied to ACT Liquor for an off premises liquor licence for 25 Bentham Street, which used to house the post office until it closed in March. It plans to operate every day from 7 am to 11 pm.

Ms Dourdoulakis, who with her husband has run the IGA since 2004, says if the licence was granted it could see the beginning of the end for the Yarralumla Shops, which has seen a number of businesses close in recent times and needs new ventures to complement the ones already there.

“I obviously don’t want a liquor store next to me but I’m looking at the big picture of what makes local shopping centres survive,” said the businesswoman, who also owns with her siblings many of the properties at the Ainslie Shops.

“We are firm believers that the shops within shopping centres need to complement each other, not fight against each other, that’s when you get closures. They’re meant to be businesses that work well together.”

She says local residents and other businesses also don’t want another liquor store there but would prefer something like a bakery, which the centre lost a couple of years ago.

They are also concerned about the impact a liquor store opening until late at night will have on crime and behaviour in the community, which already has a high rate of break-ins and robberies.

As well as the Local Liquor outlet, there are already three on-premises liquor licences at restaurants in the centre, and another liquor store would be too many.

“How many liquor licences do you really need in one centre?” Ms Dourdoulakis said. “It’s a very small shopping centre.” 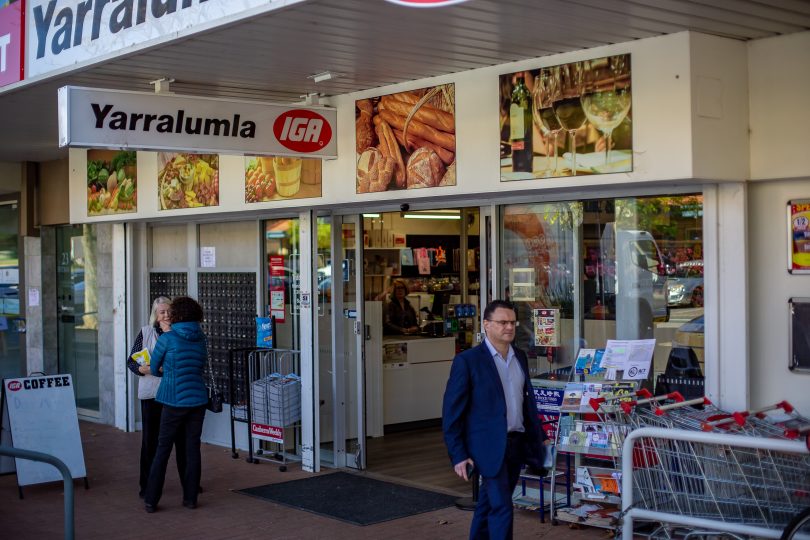 She had told the owner of the premises that she would be willing to take the lease and sub-let it to a business to ensure a right fit for the shops but he was confident of being granted the licence.

“I know a number of submissions, by residents and other businesses owners, have been sent to ACT Liquor opposing the granting of the liquor license, but I’m also afraid they may not be taken into full consideration before a decision is made,” Ms Dourdoulakis said.

Yarralumla Residents Association president Mike Lewis said the community organisation did not have a position on the application but members had lodged objections as individuals.

The Association had been concerned for some time at the number of empty premises at the shops and Mr Lewis said the Government should consider penalties for landlords sitting on tenancies, similar to those used to deter land banking.

Ms Dourdoulakis operated the post office business for eight years before selling it in 2014, and has just completed a $100,000 refurbishment to take it back to serve the Yarralumla community.

“It was a headache I didn’t really want but it needed to be done,” she said.

She feared there would be more shops closing in Yarralumla. “To see local shopping centres falling apart is quite a sad thing,” she said.

The key issues contributing to their decline were high commercial rates and rents. Some landowners were also happy to leave premises empty if they could not achieve the rents they wanted.

The consultation period for the application closes on 15 May. For more information go here.

Listen to all these anti capitalists. Business is business, if a business sees potential to make money then let them try!

The ACT is just about the only jurisdiction in Australia that permits off-licence premises to set up in close proximity. Certainly highly regulated in Qld, NSW and SA. Not sure about current set up in Victoria (they went a bit crazy during the cleanskin wine ‘bubble’).

Surely people realise that the profit from liquor sales helps to subsidise grocery sales? I wonder why Jim Murphy’s didn’t lease the old bakery. It is much larger than the old post office and could therefore stock a wide range. As far as parking is concerned, it has always been difficult at Yarralumla and I don’t see any easy answers as there is residential development all around the shops.

IGA- update your bakery section if that is a need of the community. Pretty obvious business opportunity.

Pfff, pretty hard to keep everyone happy around there, as there is so much room the shop has (pretty small local supermarket, if you visit it). I’ve done some work there, and Yvonne is really trying hard to keep the community happy as they recently made arrangements to keep the local post office alive, instead of caring just for her business and let the Yarralumla community without postal services within their local shops. Please visit them and check what’s going on over there please.

A kebab and nice beer will be a great combo👌

The IGA offers a great range of food. I’d prefer it to stay than to see it gone because of a liquor store.

Competition is healthy for the consumers! How would another shop selling alcohol result in the end of the shops? Just because the lady can’t charge 30% more for grog is it the end of the world?

they need to expand the kebab shop. That’s what everyone outside yarralumla comes for. Best kebabs in Canberra

The IGA has a great deli and grocery selection. Their fresh food offering is pretty poor. But overall they should be able to withstand some competition.

Competition! Get over it

Yep, smart move, take out IGA and replace it with liquor shop, I bet everyone is going to be happy in the area, having to travel more for groceries, and just across the corner for booze… great ideas, let’s make Australia great again!!!

“She feared there would be more shops closing in Yarralumla. “To see local shopping centres falling apart is quite a sad thing,” she said.”

Without getting into the merits of this particular case, a government which actually meant what it says when it talks about “active transport” would be doing all it reasonably could to make local shopping centres as attractive and useful as possible for people in the surrounding area – and there is much more to that than the occasional squirt of funding for a bit of landscaping, street sculpture etc.

ACT government gives grants to many businesses in the centre of town but hits outer suburban shops with increasing Rates bills that are making them uneconomical to do business.

Richardson shops are another recent death. Big support for Google drones, no support for Joe Schmidt living out of a tiny suburban supermarket.

What happened to the bakery?

Closed a few years ago due to rent increases. Also the newsagency and Thai restaurant.

I’m buying all my beer, wines and spirits on line these days. The range of product is almost infinite, the delivery is to my front door (and it very fast) and most of all it is a lot cheaper.

It sort of makes up for the punishment we are getting from the high costs of other things in Canberra, including government

When I moved to Canberra 35 years ago, owning a local grog shop was a license to print money (like a newsagent, F&V shop etc.)

IGA have great liquor purchasing power. Look at your margins and remain competitive

There’s already a second liquor shop down the road, near the library, and one further up, at the Kingston hotel.

At what stage does a local supermarket become a community asset? Well, we’ll soon find out in Monash because our supermarket closed two days ago. Lord knows what the residents of the Goodwin retirement village will do now. I believe in competition as much as anyone else but, like free speech, it has its limits. The knock-on effect must always be taken into account. My doctor is at Yarralumla and I always do a shop at the supermarket afterwards to get brands and items that aren’t available at Woolies or Coles. I hope the application fails and that Yarralumla retains its current atmosphere.

Local shopping centres need a variety of shops in a small complex, not one’s that compete with other businesses. I would prefer to support a local business not a national company.

It is a lovely suburban shopping centre, why ruin it by putting in a large chain store. The owners there priced the bakery out, they have no idea. I worked as a commercial leasing secretary 20 years ago and found many commercial landlords/leasing agents so predatory that they ultimately put tenants out of business, all they care about is the money they get out of the very binding commercial lease, people lose their livelihoods (sometimes their personal assets too) and communities lose the place they meet, eat, greet. No social responsibility towards the very people and communities that rent and use the place.

Anohs Llihpmeh thats very very interesting as i did a small business diploma after my MBA and looked at leasing costs in several regional towns and found exactly what you stated … in effect some towns charged leasing rates equivalent of CBD … in fact the major reason small businesses failed was this cost which was up to 65% above the reasonable level … often premises were too small to facilitate the businesses potential …ie. cafe restuarants that could only seat 10. Also in regional cities 85% commercial real estate is owned by only a few families … so a monopoly game of over charging and too much influence on local council developments etc.

Anohs, Jim Murphy’s is a local family owned business. The IGA “chain store” owner is the one complaining (about potential local competition).

So she got family and friends to send in objections because she doesn’t want competition?

I hope the objections get the lack of consideration they deserve. Blatant anti-competitive behaviour.

Nope, she basically fears for the local community, for a prospect of being left without a local grocery and local post office, but with a good assortment of booze just around the corner.

Of course. Silly me was thinking it was about loss of revenue.