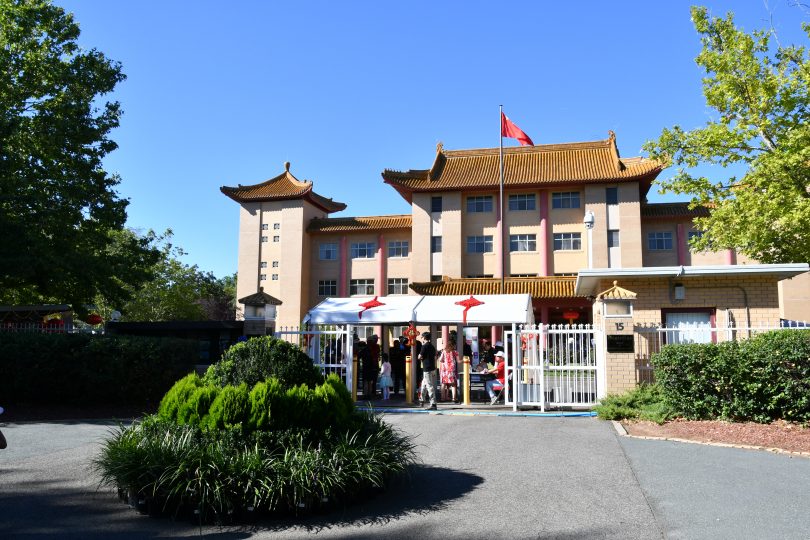 Not many Canberrans have had the chance to enter through the solemn gate and into the buildings of the Chinese Embassy in Canberra let along walk around freely in the backyard garden and enjoy theatre performances. So, on 4th of March I was delighted, on a beautiful sunny Sunday, to have the opportunity as the reporter for Canberra’s own Chinese radio station, STAR AM, to attend the China Day event hosted by the Chinese Embassy.

The China Day event is designed as a casual and fun day for family and friends to enjoy Chinese food, arts and culture. It is open to the public but, understandably, by invitation only. The event was opened by the Chinese ambassador H.E. Cheng Jingye with the following words:

I must agree. It is true about the diversity in Chinese culture and history and this was typified by one encounter I had on the day. In the middle of the event, I was approached by an old gentleman with European appearance asking for directions. I then started to talk with him about his impressions of the event and about himself. He said I would be surprised by what he had to say. He started to talk to me in Chinese with a distinctively north-eastern China accent! Although his Chinese was somewhat limited, to hear that accent was still a surprise for me. Later on, I found out that he was a 3rd generation Russian born in Haerbin City in the northeast of China. His grandparents moved from Russia to China during the late Qing dynasty and he migrated to Australia in the 1950’s. A keen historian of Russian settlers in China, he is a Russian citizen and has been living in Australia for more than 60 years. 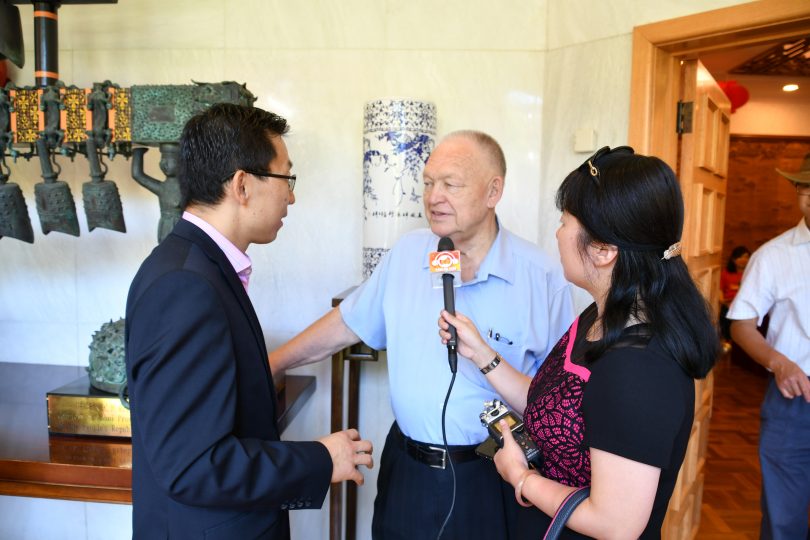 At the event, there was no shortage of wonderful artefacts and stage performances. The visiting China National Opera and Dance Drama Theatre’s Chinese music Orchestra won loud applause for their flawless performances. It was such an exciting time for the Canberra Chinese community to showcase their culture and arts. One of the Chinese calligraphers reported he had created over 400 pieces for the visitors and, though exhausted, felt fulfilled. 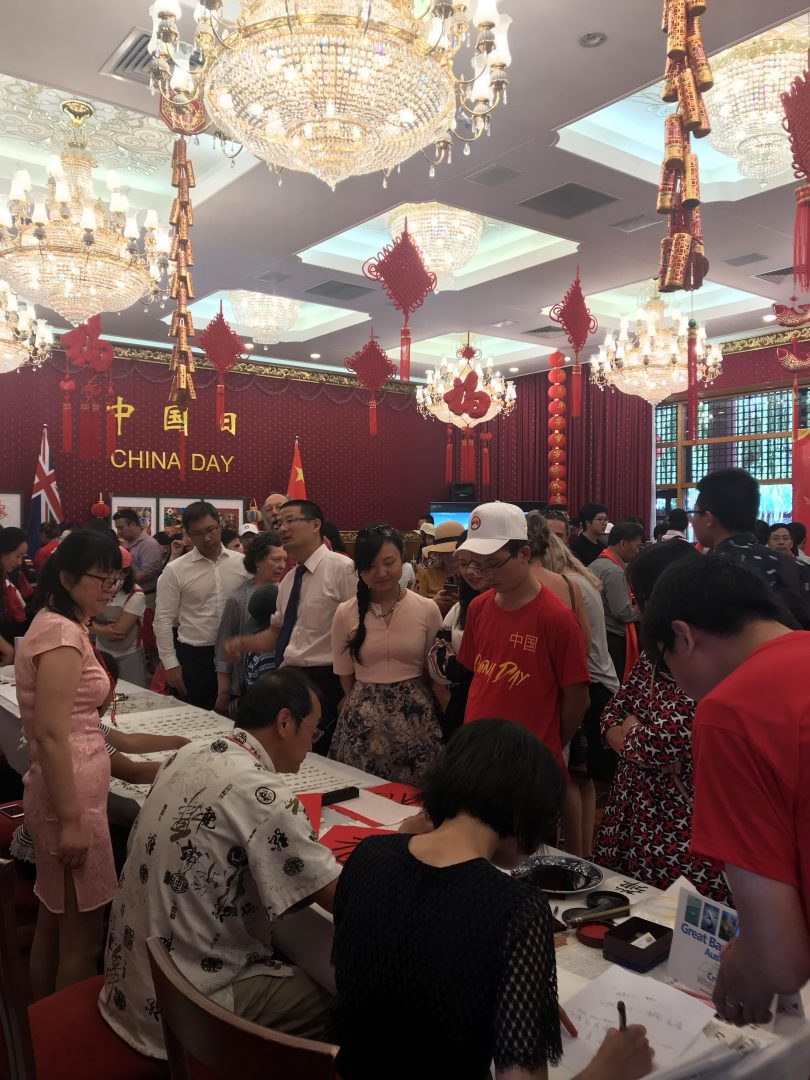 While I was wandering, I noticed a crowd of Chinese students around one person in a corner. It was Professor Brian Paul Schmidt, the Nobel Prize winner and the Vice-Chancellor of The Australian National University. No wonder he found himself at the centre of Chinese students’ attention. Among other things I was able to ask him about ANU’s overseas student’s recruitment strategy, the advance of science in studying the Universe, the biodynamics approach and the vineyard he had started. In the end, what stuck in my mind from what he said was: “If I was that clever I would not have started the winery in the first place”. Hindsight is always a revelation! 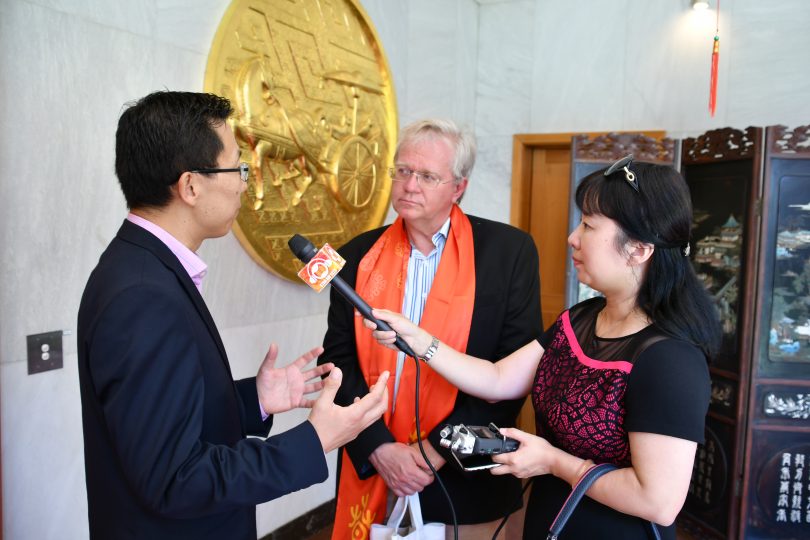 Professor Brian Schmidt, the Vice-Chancellor of the Australian National University.

I was lured to the food stands later by the smells and the rumour that the Chinese embassy’s chefs are the best in town. Those familiar with the Chinese embassy say the buffet banquets prepared by those chefs are always top class and make you want to come back. I was disappointed to learn that since they have over 1500 visitors on the day there would have no buffet banquet this time, but the Embassy’s chefs still prepared takeaway style food for guests to purchase. In reality, I could not complain about the $3 stir-fried rice, noodle or Sichuan style chicken with rice and lots of other fresh finger food like the spring rolls and steamed dumplings for just $2. There was other yummy food like BBQ meals and cold snacks prepared by other food vendors from Canberra. 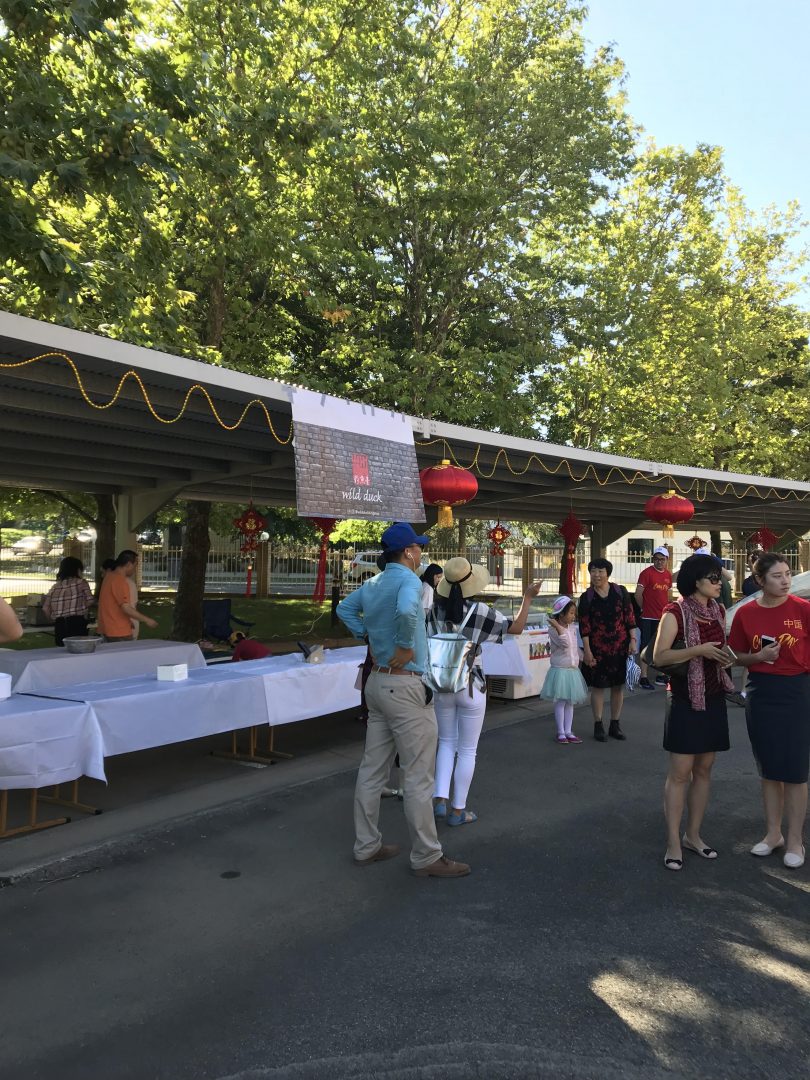 When considering China and Chinese culture, people may just think about the ancient things like the Great Wall, about the story of silk, traditional food and performances, but they often overlook modern China’s industrial and economic capacity. Around 10 large Chinese corporates attended the China Day event to showcase their services and products in Australia. It’s staggering to realise that each of those corporates are individually bigger, in terms of overall size and profits, than Australia’s major four banks put together.

One product that did catch my eye was the two MG (Morris Garages) cars displayed on site. For many car lovers, they would know that MG is a British car brand created back in the 1920s. The business was sold to the Chinese car manufacturer SAIC in 2007 and the current car models are designed and engineered in the UK but made in China. That is why the prices are so impressive for such good-looking cars (we will test drive those MG cars later and give a fuller report). 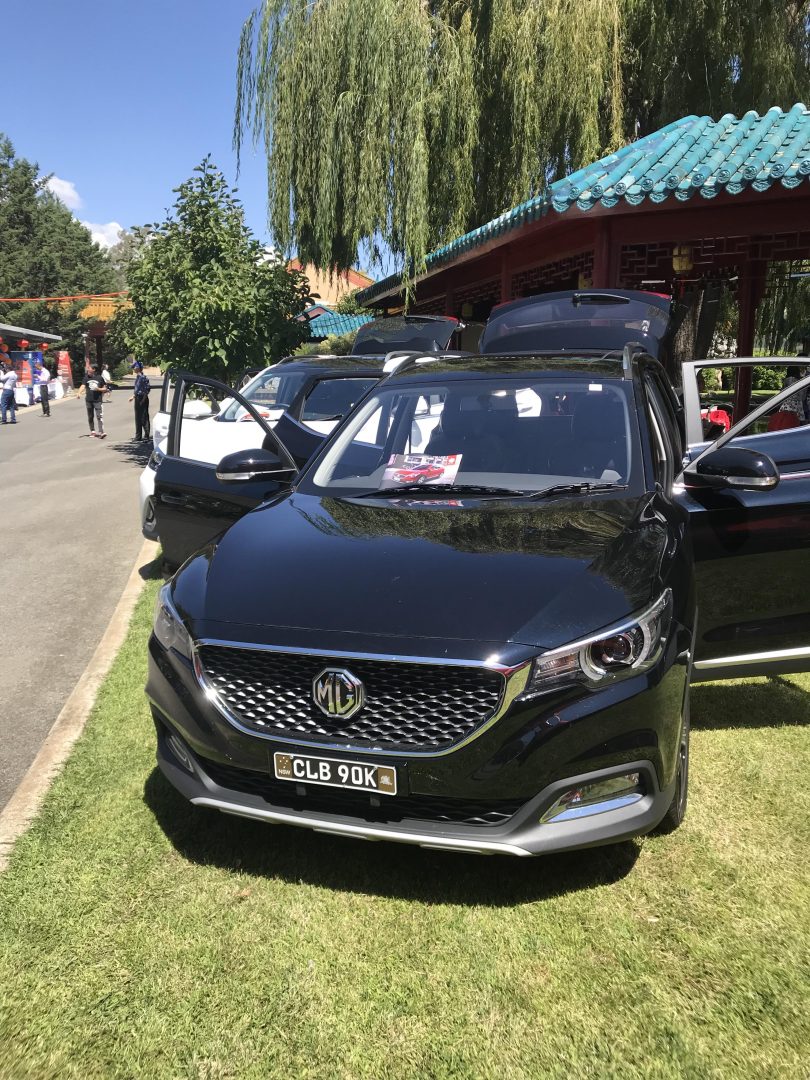 MG Cars-UK brand but made in China with great value.

As demonstrated by the MG cars display one can see the trend: China is learning fast from the developed countries and is making fast progress in various areas of its economy. There may be no better time for Australian businesses and politicians to visit China and see how to manage matters on a larger scale. Up to 2017, China had already built 25,000 km of High-Speed Train lines while in Australia we have absolutely none despite being similar in land size. Between Sydney and Melbourne, we do have one of the busiest airways in the world. It’s hard to believe we have any excuse for not having high-speed trains.

The 2018 China Day celebrations at the Chinese Embassy in Canberra was a great success for me and I think were widely enjoyed by the invited guests. 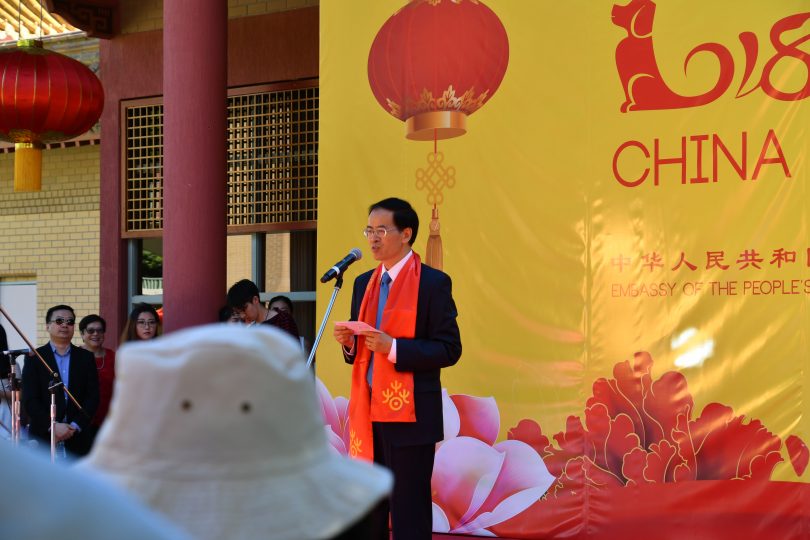 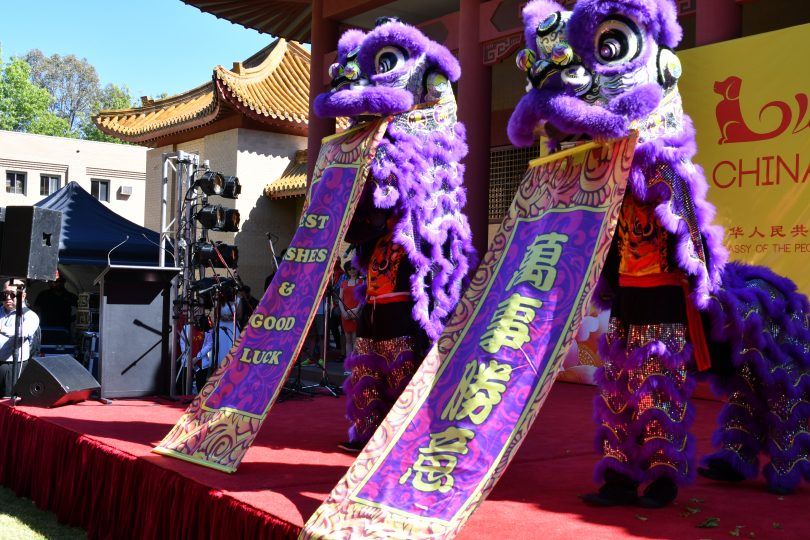 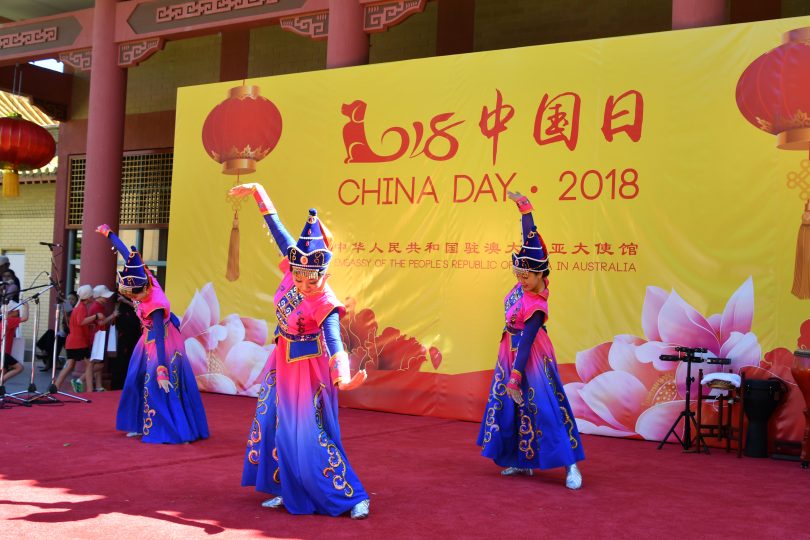 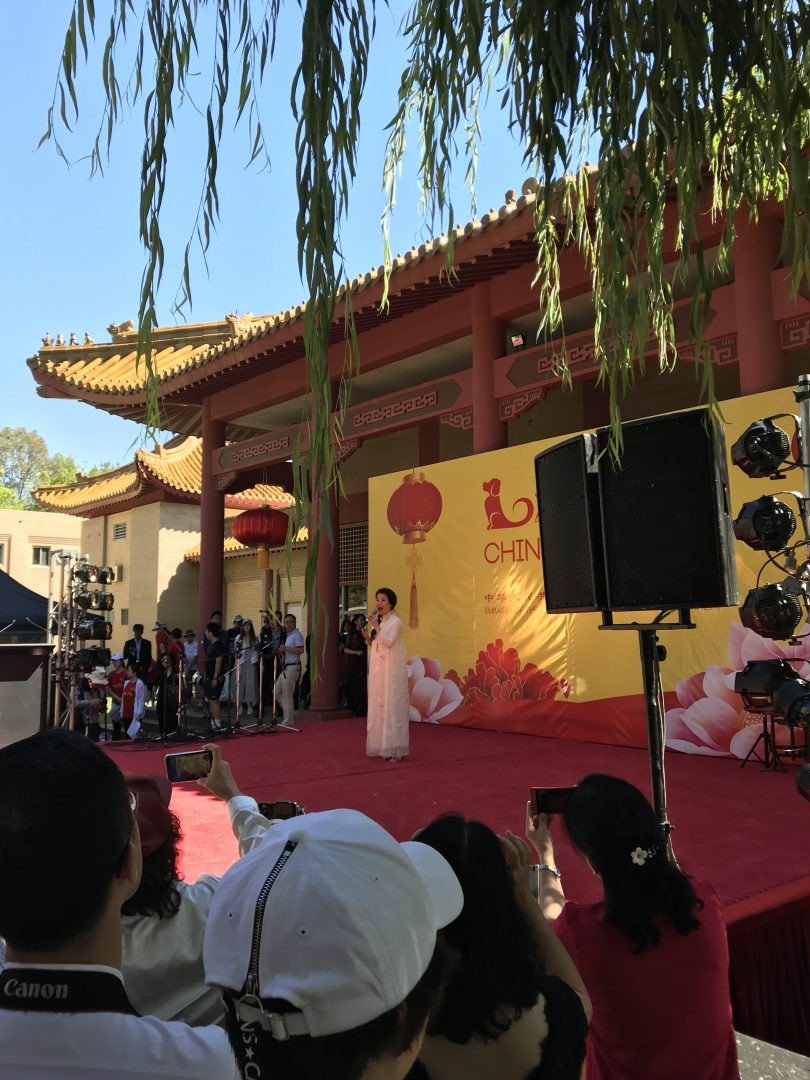 Anyone interested in next year’s China Day and/or in specialty business visits to China, can contact STAR AM (www.staram.com.au) for further information.

Geoffrey Bell - 53 minutes ago
The money is in the land if you want to upgrade down the track, steer clear of apartments. Rentvest is another way to get on... View
Julie Macklin - 9 hours ago
Rheyce Spears Did your mother and grandmother have male guarantors? View
Andrew Dale - 10 hours ago
A 1 bedroom apartment is all you will get for 350k View
Food & Wine 31

Lin Van Oevelen - 10 hours ago
John Moulis The cause of the fires was said to be the fast growing grass and undergrowth because of more rain, so that does s... View
Capital Retro - 14 hours ago
Lets debunk this notion now that climate changed was the cause of the 2019 - 2020 fires. The Ororral Valley fire was ignited... View
John Moulis - 15 hours ago
I'm reluctant to believe this. 1974/75 and 1975/76 were La Nina years. I remember being in Forster in January 1976 and it rai... View
News 17

Lynn Stape - 12 hours ago
agreed... I couldnt think of much worse than cleaning in a hospital at the moment... talk about front line staff.... View
Food & Wine 30

Mel Casao - 15 hours ago
Kevin Lo What ya think of this place? View
Luke Evans - 20 hours ago
Lisa Black I'll be in on that View
Kirrilly McKenzie - 21 hours ago
Anita Patel amazing! Terima kasih!!!! View
Property 56

Capital Retro - 16 hours ago
Volvo said in 2017 that this would happen in 2019. They are probably just virtue signaling. Meanwhile, their Polestar EV JV c... View
Simon Azzopardi - 17 hours ago
Very soon they will have no choice as EVs take over! Better get it sorted now rather than leave it to later.. View
Robert Azzopardi - 19 hours ago
Being on the EC side of things I congratulate the owners of IQ for allowing this project to proceed. I’m hopeful that other... View
News 82

Alan Hopkins - 16 hours ago
do you use the roads? last time I checked they weren't funded by the end user. Btw if you pay so much in rates perhaps you sh... View
Adrian Glamorgan - 20 hours ago
interesting thought View
Adrian Glamorgan - 20 hours ago
You benefit by having a city that isn't as clogged up with cars as it would be if a light rail didn't exist. "User pays" is t... View
Opinion 3

Chinese art and tradition on show in landmark exhibition at NMA

@The_RiotACT @The_RiotACT
The first koala joey to be born at the National Zoo and Aquarium has been officially named. So what's she called? https://t.co/LsECG70PBh (9 hours ago)

@The_RiotACT @The_RiotACT
The January storms may be a sign of future disasters, but even now, 67,000 ACT households may be unprepared for storms this summer https://t.co/B9i7abgx1Y (11 hours ago)