It’s confirmed: Genesis is all about the First World 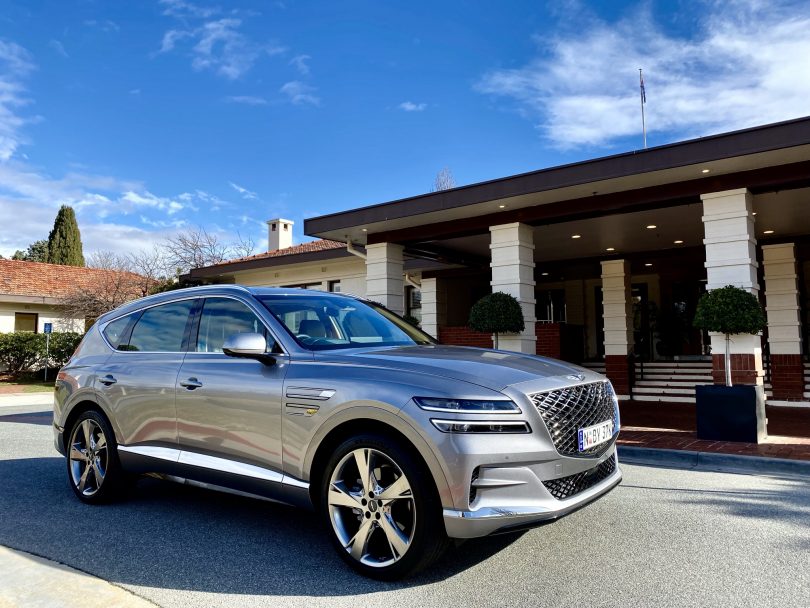 I’d like to set something straight from the off: this car is not, as I’ve heard Genesis described, “just a freaking Hyundai”.

Initial reactions are the same everywhere – a long gawk at the winged badge, enormous chrome crest grille, quad lights and 22-inch wheels, followed by an appreciative whisper about its “really good looks”.

Then the question, “What is it?”

Normally at this point, I would mention how Toyota has Lexus, and Nissan has Infiniti, but I don’t think even that comparison does the Genesis justice.

We might still be tingling from decades of dreary Excels, Sonatas and others I can’t even be bothered to mention, but in recent years, Hyundai has taken a definite turn upstream and never looked back. 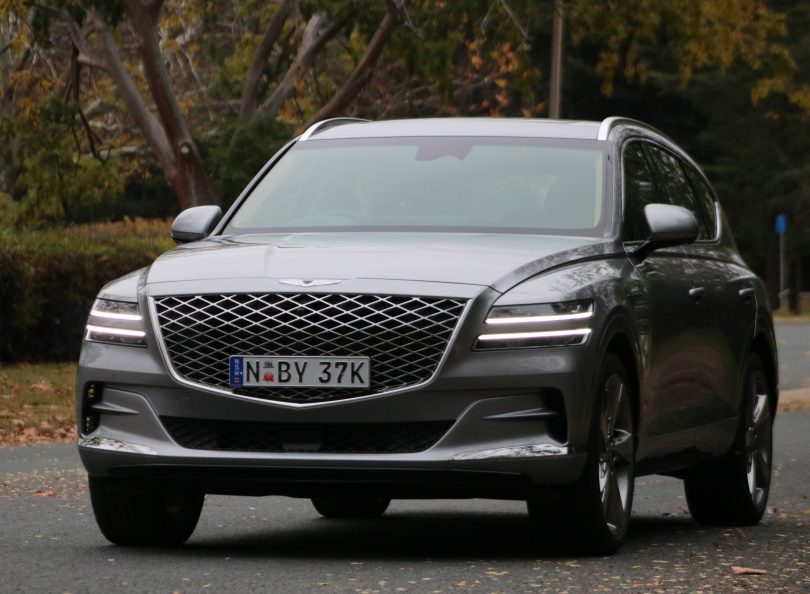 The South Korean car maker is consistently topping sales charts around the world, getting rave reviews for its quality and reliability, and snatching up awards left, right and centre.

In 2017, Hyundai launched a sporty version of the i30 hatchback called the N, which caught out even Volkswagen’s class-leading GTI. At about the same time, it also poached heads from BMW, Mercedes, Bentley, Lamborghini and Volkswagen, and set about an all-new luxury division.

It’s true the first model was called Hyundai Genesis, but nowadays you won’t even find the ‘H’ word in one-point font on the window glass.

To prove just how posh it really is, I take the new Genesis GV80 to some of Canberra’s poshest locations – principally, the Hyatt Hotel in Yarralumla.

Immediately, however, it doesn’t fit in all that well. 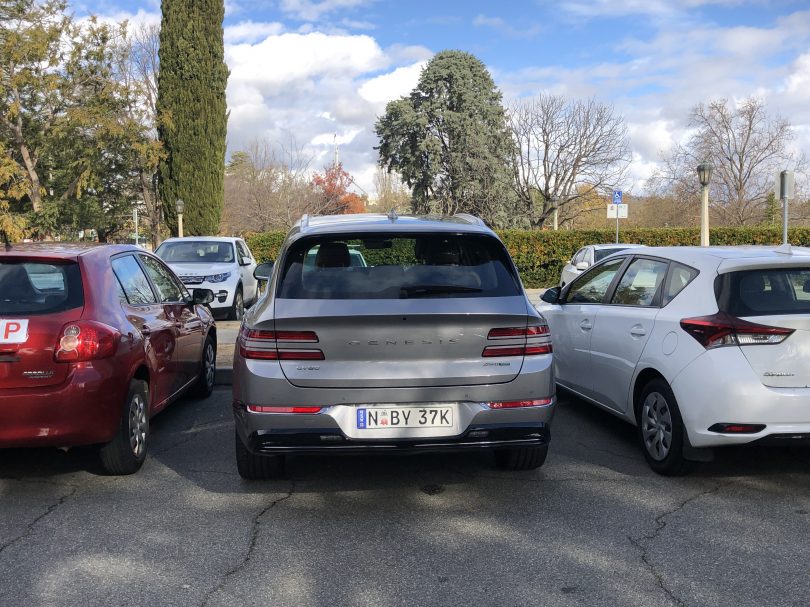 The Genesis GV80 parked at Hyatt Hotel Canberra. Not seen is how long that parking manoeuvre took. Photo: James Coleman.

Genesis has four models available – two sedans and two SUVs – and the GV80 is the most gigantic of them all, comfortably seating seven people with a decent boot left over. There are cameras on every side, but even with all them constructing a bird’s-eye view of the car and its surroundings on the screen, squeezing it into the car park is a very lengthy and delicate task.

The Hyatt was Canberra’s first hotel, opening in 1924 as Hotel Canberra – a place where travelling politicians could spend the night.

It closed in 1977 and all the furniture was donated to Darwin residents whose city had just been obliterated by Cyclone Tracy. The rooms served as extra parliamentary offices for the next 11 years, before it reopened as Hyatt Hotel Canberra.

But everything about the building still echoes its 1920’s Art Deco heritage. The interior is set up beautifully and there’s an instant air of class the moment you enter. 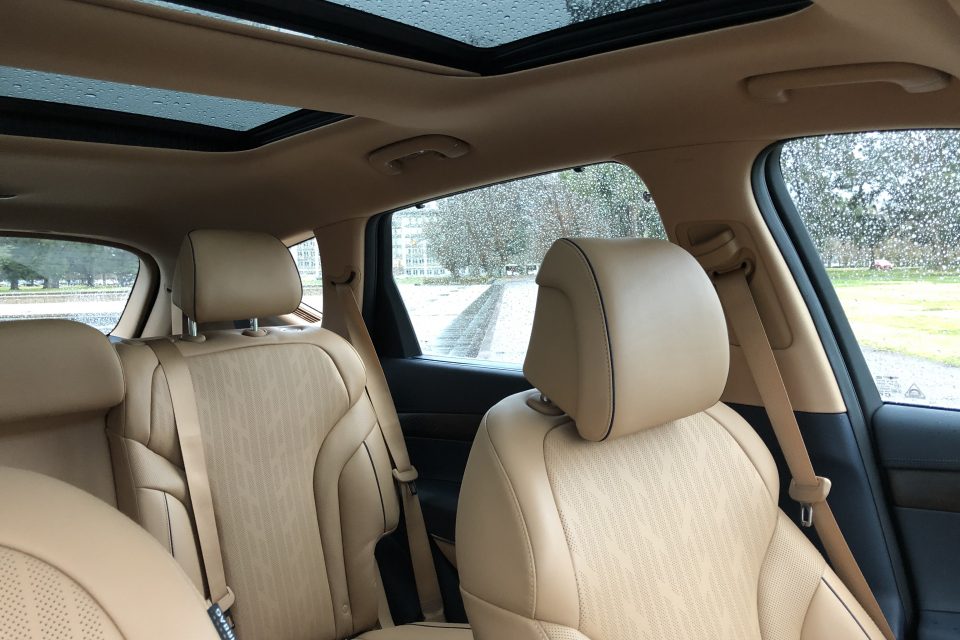 The leather seats are heated and ventilated. Photo: James Coleman. 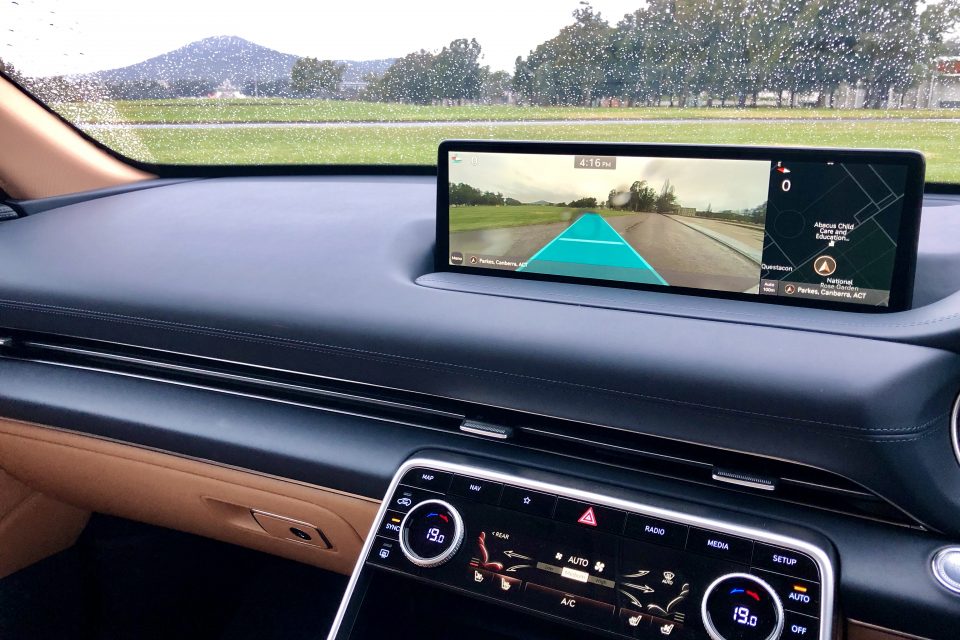 In case you miss the view out of the windscreen, there's another option. Photo: James Coleman. 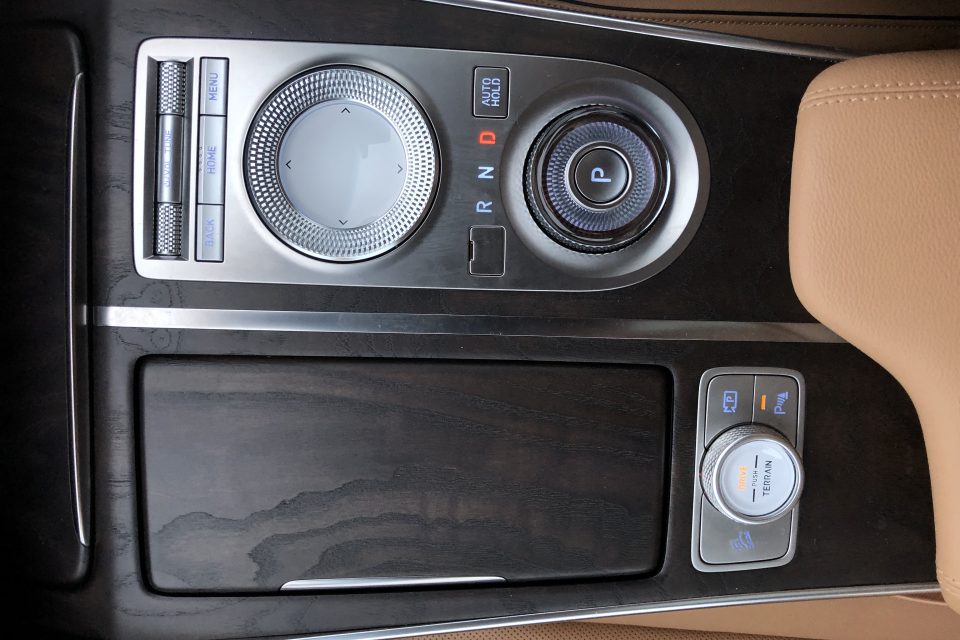 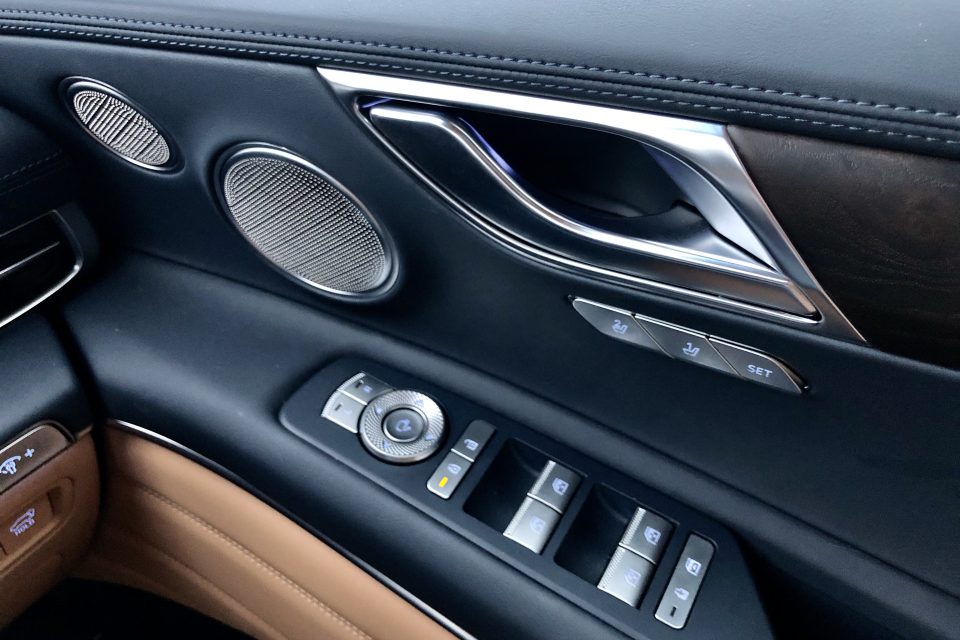 The door controls (before they stopped working). Photo: James Coleman.

The leather seats are heated and ventilated. Photo: James Coleman.

In case you miss the view out of the windscreen, there's another option. Photo: James Coleman.

The door controls (before they stopped working). Photo: James Coleman.
1/4

The Genesis is the same. If the exterior doesn’t make you immediately think ‘Bentley’, the soft leather seats, deep-pile carpets and dials chiselled to look like crystal definitely do.

And yes, that is real wood.

There’s more. Dive into the 14.5-inch centre screen and you have access to all the bells and whistles. Even more subtly, microphones in the cabin pick up road noise and then actively combat it by piping reverse soundwaves out through the speakers. That and the front camera sees bumps in the road ahead and primes the suspension to deal with them.

It’s an all-new chassis and an all-new engine so nothing is shared with your neighbour’s Santa Fe. My one is equipped with the 3-litre 6-cylinder turbo-diesel, automatic transmission and all-wheel drive. 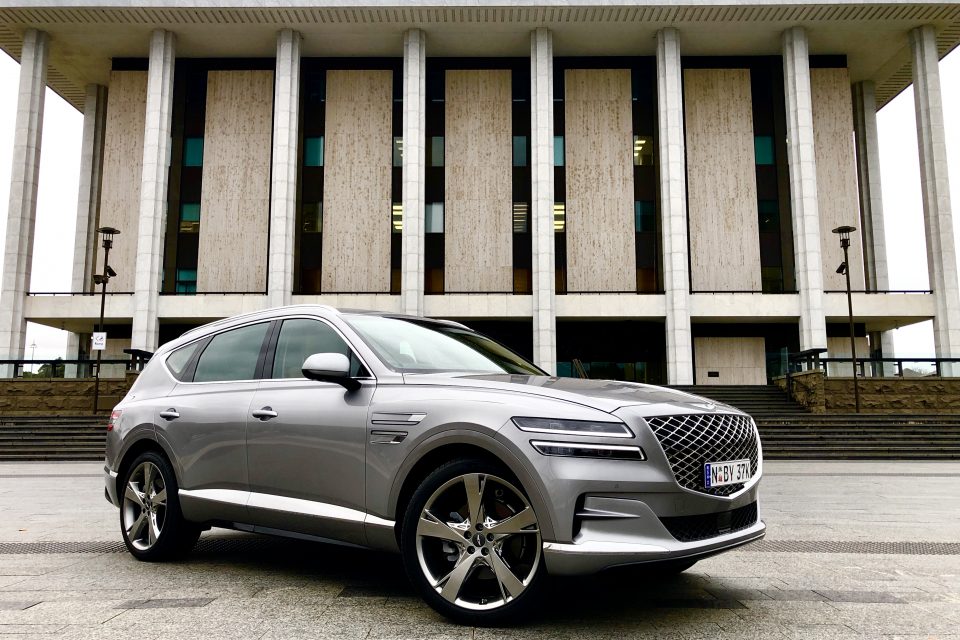 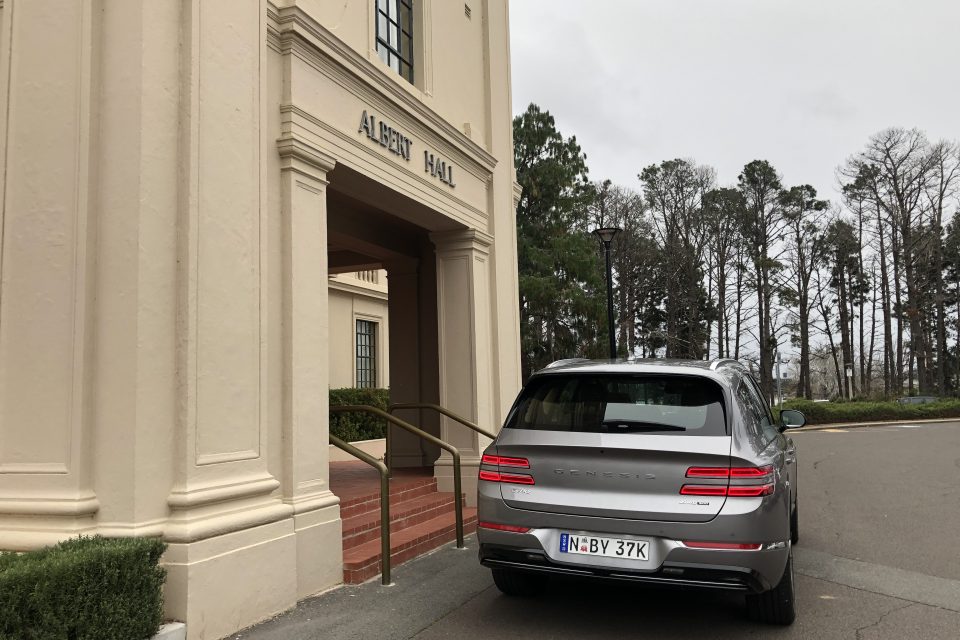 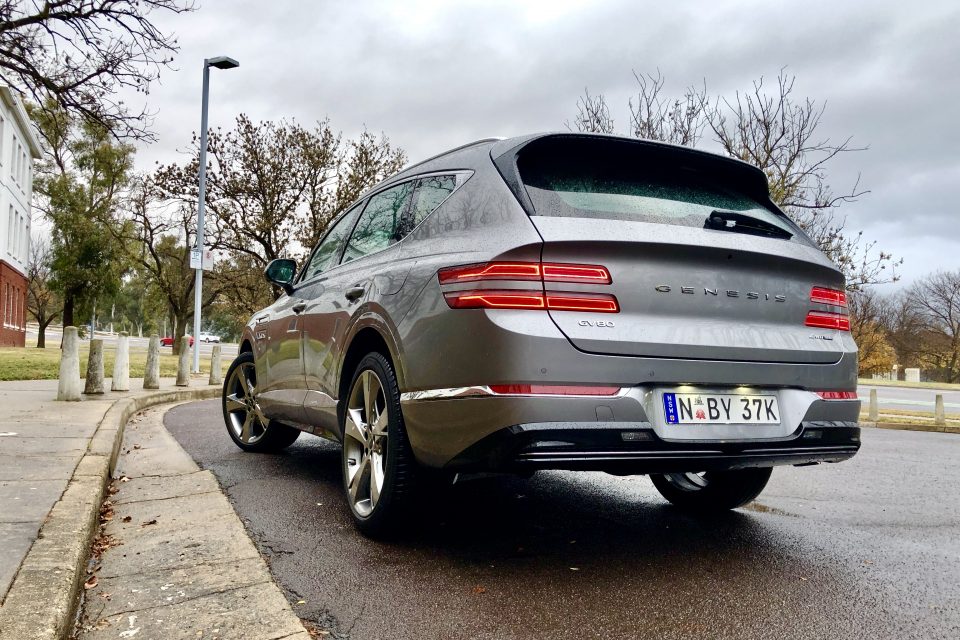 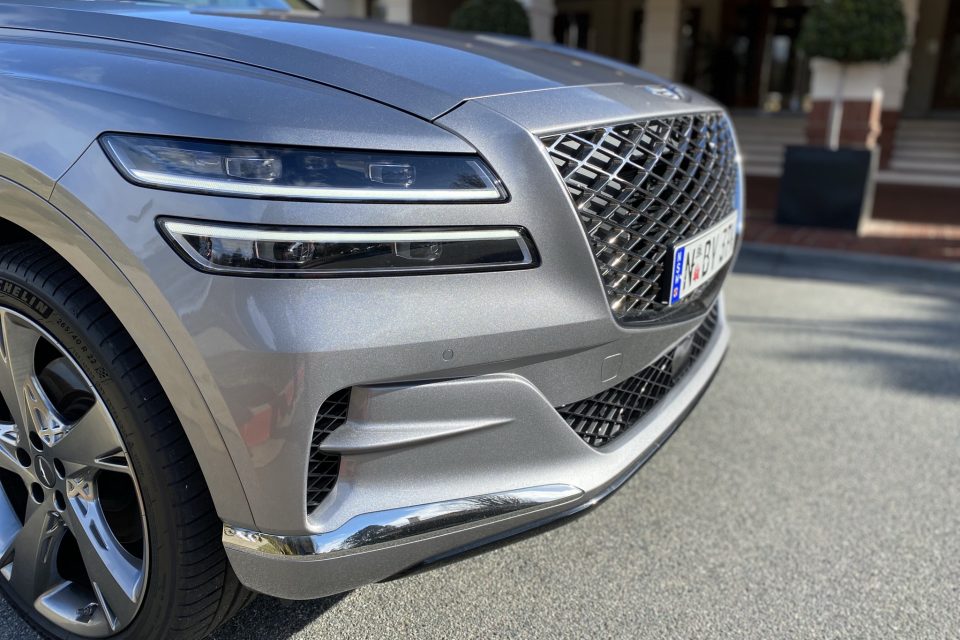 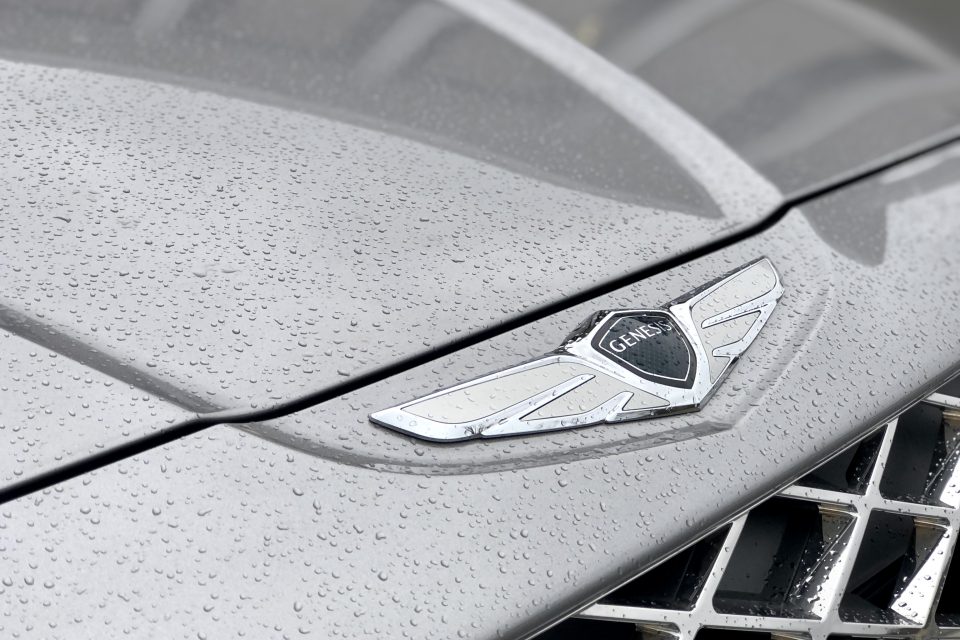 Put it all together and forward motion is smooth and effortless. I know it’s a cliche, but sitting in the driver’s seat of the GV80 is genuinely like riding a wave – a wave that can gently lap the shore just as it can mightily pound it.

Maybe potholes still make too much of a bang, and it can feel like a bit of a boat at times. It would also be nice if the seat-massage feature came as standard.

But these are massive First World problems. Then again, Genesis is all about the First World. After all, the rear-wheel-drive petrol GV80 starts at $90,600, and this one at $103,600.

Is that too much to stir the hearts of those who dismiss them as nothing more than glorified Hyundais?

But look at it this way – even if Hyundai is behind Genesis, that just means the cars will work.

That’s how I was going to end this review, but then all the electricals in the driver’s door decided to die.

No, hang on, a fuse has jostled out of position. I stand by my statement. 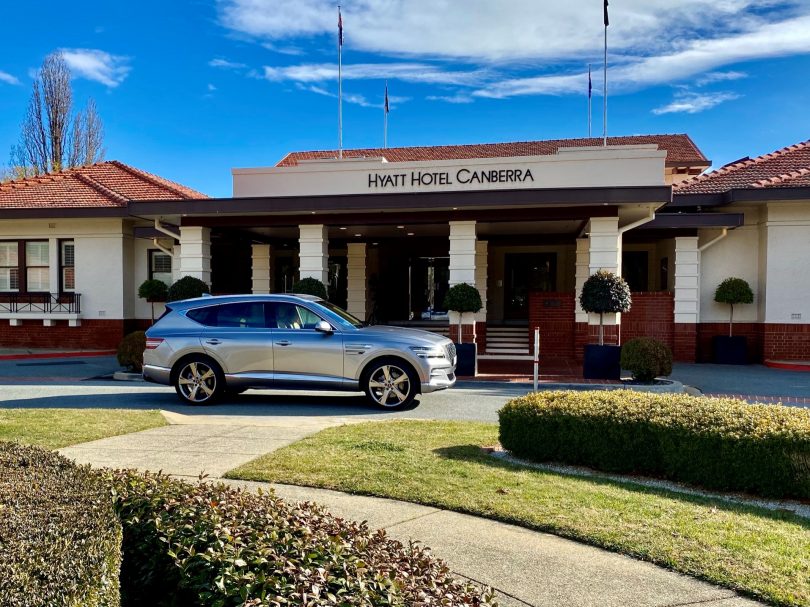 4 Responses to It’s confirmed: Genesis is all about the First World
Filter
Showing only Website comments

I don’t think it qualifies to be called a Genesis. More like a bad version of In the air tonight by the local 1980s cover band.

Can’t say it’s a…pretty car. Rather the opposite. Reminds me of some of those big, ugly American cars.

Another land barge that nobody needs except to signal to the world how insignificant they feel unless they’re surrounded by 2.2 tonnes of metal.

No denying they are making some pretty fine cars at present, but this is fugly, and too big. Bulk does not make for status.

planet42 - 10 hours ago
Have lived in Canberra for 50 years, always loved it, never embarrassed. Nature, coast and mountains are close, driving is ea... View
Helen Prior - 10 hours ago
Lived Canberra 40years Left 2003 Now live Central Coast.Biggest mistake ever.I want to come home but I have to win powerball.... View
Sandy Duncan - 10 hours ago
Moved from Brisbane in '94 and not going anywhere ! Have travelled the country, always looking for our 'next location' but Ca... View
Food & Wine 141

@The_RiotACT @The_RiotACT
Winter Wonderland at the Haig Park Village Markets is packing two weeks' worth of markets into one big day. Here's why it's worth ditching the doona and clearing the calendar next weekend https://t.co/D5REfmVIWh (10 hours ago)

@The_RiotACT @The_RiotACT
It's been home for 30 years to one family and now this much-loved five-bedroom family home in #McKellar is ready for a new chapter https://t.co/paX4bTWwy1 (11 hours ago)