Jay Sullivan is the Drunk Monk 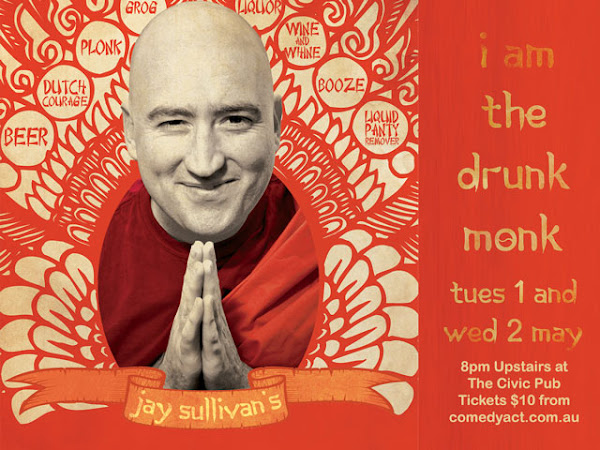 Jay Sullivan is the drunk monk. Well, almost. He is a bald semi-Buddhist and, by his own admission, “has no sex or possessions.” Sounds like a monk to me. Not for the faint hearted but with wisdom to impart, Jay’s new show: “I Am the Drunk Monk” shows why he is not only Canberra’s favourite son, but also one of the most unique comic voices in Australia today.

“This guy is an intelligent comic with his eyes on the stars and his mind in the gutter. If you prefer your comedy, bald, drunk, monk-like and in-your-face, this is the show for you.” – The Pun

Two kinds of people are willing to try and answer life’s big questions: drunks and monks.

Spiritual, but with a full shelf of spirits.

This show charts his journey from fundamentalist Christianity to pseudo Monk with plenty of laughs along the way.

Come along, laugh, drink and get slapped in the face by the sound of one hand clapping.

The drunk monk will be performing over 2 nights and will feature supporting sets from local comedians.

This guy is great, he will be fresh back from a month at the Melbourne comedy Fest so he should be in great form. I thought I was going to miss this show as I cant get to Melbourne this year, but im so happy he is putting on two shows in Canberra. He also has a very funny CD out called Jay Sullivan Whatever Suits, it is available on Itunes.

well worth seeing I know I will go

NiCe_tRy I_WoNT_LiE - 26 minutes ago
Anyone who knows bruiser could've told you he would pass the test. Good on ya bruiser !!! View
Chris Pye - 1 hour ago
Yes!!!! There is still some good in the world! Absolutely wrapped for Pauly and Bruiser 👊 View
Sharon Allan - 2 hours ago
Such great news Paul glad bruiser and u will b reunited soon 🐕🥰 View
What's On 1

Janette Hugs - 3 hours ago
I’m on DSP and recently moved to Canberra. I’ve only once driven through Civic in December. Since then due to circumstanc... View
countach - 5 hours ago
I think it's unfair that you can be a 15+ over the limit, super speeder hooligan for doing what was legal a month ago. Either... View
countach - 5 hours ago
Funny how a month ago it wasn't endangering, but now it is. Anyway, I agree to an extent. I got pinged for the first time in... View
News 8

Fit and active Jay had a heart attack at 31. Statistically, he should be dead. Here’s why he isn’t