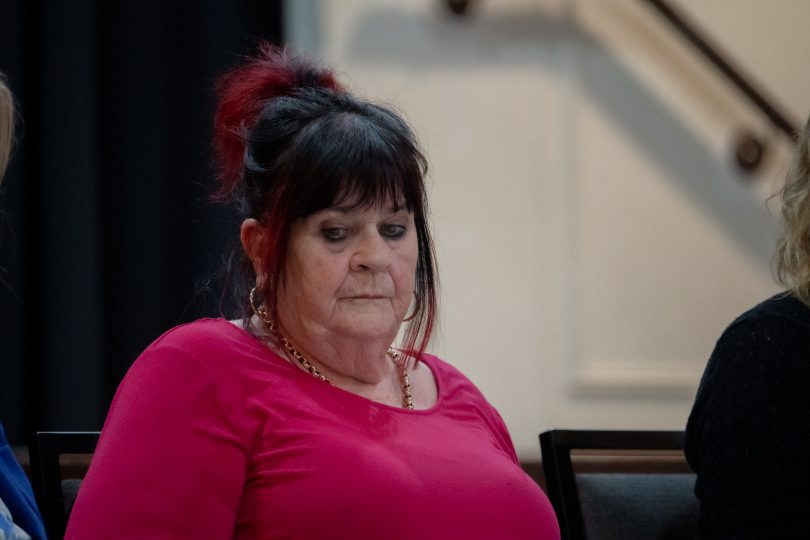 Julie Tongs says nothing will change without a royal commission-style inquiry into Indigenous disadvantage in the Territory. Photo: Region Media.

The head of the Territory’s only Indigenous-owned and community-controlled health service has accused the ACT Government of just putting words on paper over its recent Budget funding announcements aimed at reducing the number of Aboriginal and Torres Strait Islander people in the justice system.

Winnunga Nimmityjah Aboriginal Health and Community Services CEO Julie Tongs has again renewed calls for a Royal Commission-style inquiry into Indigenous disadvantage in the ACT – something the government hasn’t yet committed to.

Over the weekend, the ACT Government announced it would provide an $11.5 million cash boost over four years to eight initiatives aimed at reducing Indigenous incarceration rates in Canberra.

According to the latest available figures from the Productivity Commission’s Report on Government Services, First Nations people make up less than 2 per cent of the Territory’s population but 24.4 per cent of detainees at Canberra’s jail, and the Indigenous incarceration rate was 1369.4 per 100,000 people compared to 93 per 100,000 population in the non-Indigenous population.

Attorney-General Shane Rattenbury said these programs take steps to address the challenges faced by Aboriginal and Torres Strait Islander people at the different stages of their experience with the justice system. Photo: Michelle Kroll.

“Many traditional justice system features are not designed with the needs of First Nations people in mind,” he said.

“That is why, from conversations with the community, we have developed a suite of new and continuing programs to rebuild trust in the justice system.”

The government is aiming to reduce the incarceration rate of First Nations people to match non-indigenous people by 2030.

Some of the initiatives to be funded by the $11.5 million include culturally appropriate support for Aboriginal and Torres Strait Islander people in police custody through an Interview Friends program, increasing the sitting days of the Galambany Circle Sentencing Court and supporting ex-detainees to reconnect with Country and community through the On Country and Empowerment Yarning Circles program.

It builds on previous announcements of additional funding which will go towards Aboriginal Legal Services NSW/ACT.

The funding would support the continuation of the Winnunga Nimmityjah Aboriginal Health and Community Services’ model of care at the Alexander Maconochie Centre.

That’s been welcomed by Ms Tongs – as has the commitment to the rest of the initiatives – but she was concerned about how many initiatives the government said it would fund with that $11.5 million over four years.

“If they are going to provide Aboriginal people to work with detainees, then I welcome that.”

Ms Tongs was also pleased with the expansion of the Galambany Circle Sentencing Court.

Ms Tongs worried these commitments look good on paper but may not address the root cause of Indigenous incarceration rates.

“The biggest problem in this community is the racism and the poverty. From there stems the removal of Aboriginal and Torres Strait Islander children, family violence and other issues,” she noted.

“This is just one element and there has to be something with some teeth – a Royal Commission or another inquiry – to get the bottom of this.

“We can’t just keep throwing bits of funding at things when things get a little bit political. It doesn’t necessarily solve the problem. We are still going to have the problem until we work with the families who suffer racism every day.”

So you are saying that 98% of the 24% of detainees that are locked up are not guilty of the crimes that they are charged with or are they allowed to commit crime and not be punished due to their ethnicity. If you do the crime do the time, don’t complain about the punishment when it is as simple as leading a healthy life and being a productive member of society and being an example for your family and race. The sooner the I am being hard done by mentality and looking for excuses for why you commit crimes is accepted by all criminals the better off society will be.

Very easy to blame. Harder to come up solutions. Government money will fix it.

While Shane might want a good discussion 18C stands in the way.

I’m astounded at this. The root cause of going to prison is breaking the law. Don’t break the law, don’t go to prison. Simple right? This assumes of course that people are responsible for their own actions, irrespective of your race, an old fashion idea but one that hopefully still has merit.

Very astute observation SO. So if you come from a stable family with loving parents who work & give you appropriate skills you should have the same outcome from someone brought up with dysfunctional, alcoholic parents, family violence & little parental guidance?

And that’s probably one of the biggest problems and so far money hasn’t been able to resolve that issue.
The previous Government trialled a welfare card to try and reduced alcohol abuse in some communities, yet the new Government intends to scrap it.
Government, with the best of intent at the time, went so far as to remove children from families. It was later determined that this was not in the interest of the child and their community a national apology had to be made.
I was on a bus a few years ago and a primary school-aged boy and his family boarded. None of them paid for their ride and the boy was dressed in a t-shirt declaring 26th January”Invasion Day”. He was too young to make informed decisions, but was already being conditioned to expect things for free and that his lot in life was because his land had been stolen.
If you tell someone often enough that they are a 2nd class citizen, they’ll believe it.
I don’t get the logic behind the concept that only indigenous organisations can provide support services for indigenous people. I believe that potentially it further isolates these people and increases that divide.
I don’t have answers, other than it comes down to education, employment and self-esteem and much of that starts with the indigenous elders.

We just teach them that everyone else is the bad guy. People that have just moved here from who knows where have to apologise.

Were there actually any government mandated stolen children? There was a recent case in SA that found the opposite, where a government official did the wrong thing and broke the law of the time by giving a child away to foster parents.

Franky,
So you’re suggesting that we should remove children from families where they don’t have loving parents who are unable to teach their children appropriate ways to behave?

I think they have a name for that, apparently you’d get in trouble for discussing it

I’m over the radio ads

Please, not another enquiry! They are usually held to stall action. No doubt that racism and poverty are prime when it comes to the gross over representation of indigenous peoples and incarceration rates but those factors won’t be addressed by another inquiry. It would be educative to see a breakdown of the crimes committed by incarcerated indigenous people. If the ACT is like most Australian states then crimes involving violence particularly in domestic situations while under the influence of alcohol or drugs would feature highly. It would be even more educative to hear from the victims of those crimes and their views on whether the perpetrator should be incarcerated or not. We are always hearing about the sad state of the perpetrators but when was the last time an ‘enquiry’ sought the feelings of the victims of these crimes. Ask them if they want a perpetrator, so violent so often that he has been removed from the community, back on the streets post culturally sensitive counselling. The incarceration rate narrative is invariably one sided. The elephant in the room is the need for indigenous males to take responsibility for their actions.

Money will never solve the root cause… And it never will.

We cannot ignore the social disadvantage and the impact of colonisation on how a population behaves. Regardless of first nations people or not, those that are more socially disadvantaged are over represented in the justice system. I do not however see how improved access to legal services actually treat the root cause. Treating the root cause is empowering people by giving them a safe environment so they can see how they have the power to chose & be rewarded (in the form of reciprocal protection) for abiding the law. When one associates the law as something that’s traditionally been unjust to their population, there is a culturally ingrained disrespect & disdain for the law. To undo the damage of centuries of injustice there needs to be improved understanding both ways from the justice system how culturally entrenched mistrust occurs. To review our own culture prejudices and to educate those that are socially disadvantaged and to show them that the justice system is there to keep society safe and it’s role is rehabilitation & education, not just punishment.

Julie Williams wow, that is SPECTACULARLY ill-informed. Read the story and think, even for a minute, before you type.

Philip Selmes my ancestors were stolen generation. I have not broken the law… are you saying I have a God given right to now do so… maybe some are seeking reasons for poor behavior when they could look closer to home.

Philip Selmes what would you say the root causes are specifically?