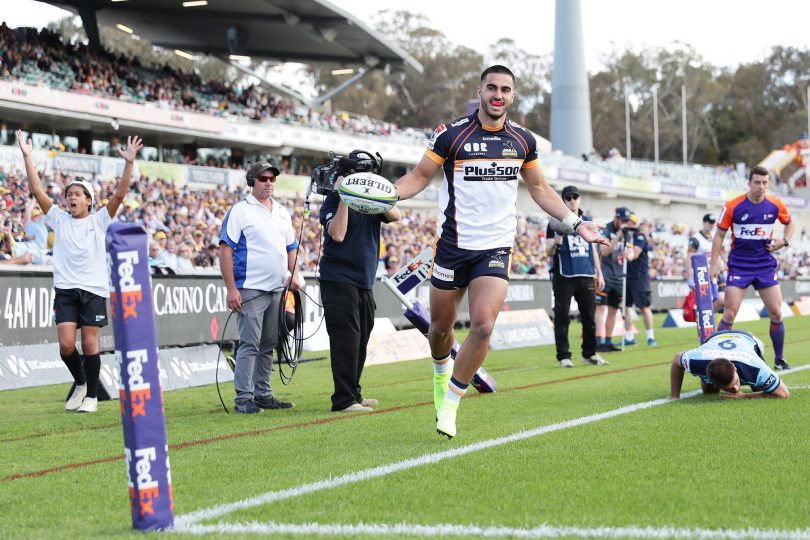 Tom Wright bagged a double off the bench as the Brumbies cruised to a 47-14 win over the NSW Waratahs at GIO Stadium on Sunday afternoon (15 March). Photo: Brumbies.

The Brumbies showcased their dominance as Australia’s best Super Rugby team with a landslide win at GIO Stadium yesterday, crushing the NSW Waratahs in a 47-14 victory and claiming The Dan Vickerman Cup in the process.

Wingers Solomone Kata and substitute Tom Wright crossed the try line on two occasions to lead the Brumbies in the try-scoring department and make it five wins from their first six games in 2020.

On a sour note for the hosts, captain Alan Alaalatoa went off injured in the first half in what looked like a serious arm injury.

The win sees the hosts top the Australian conference by a comfortable 10 points, while the Sydney outfit suffered their fifth loss of the season, also earning the dubious distinction of back-to-back matches without scoring a point in the second half.

One member of the host’s squad has already made himself a fan favourite and proven himself a valuable asset in the Brumbies backline and a menace to hapless defensive lines. That man is Kata, who arrived in the nation’s capital this season after leaving the New Zealand Warriors.

Having played union in his junior years, switching codes was not a wholesale change for Kata to begin his new journey in Super Rugby and his performances thus far have shown he has not looked back in the slightest.

The 25-year-old wide man has staked his claim for being one of the first men on McKellar’s team sheet and it did not take long at all for the Kiwi to settle into his new surroundings, scoring five tries in his first six Super Rugby appearances.

Though he limped off the field during the second period of play, his first try showed his ability to break through tackles and score, while his second displayed his quick pace down the Brumbies’ lethal right edge.

The Brumbies and their faithful can only wish this form continues as one of the best wingers in the league and the former Warrior will, without a shadow of doubt, play a massive role in helping the Brumbies strive for their first Super Rugby trophy since 2004.

However, that quest is on hiatus following the conclusion of Sunday’s encounter, with the Super Rugby competition suspended indefinitely due to coronavirus, which has seen gatherings consisting of over 500 people cancelled until further notice.