Kmart, on behalf of its business Kmart Tyre & Auto Service (KTAS), has provided the Commissioner for Fair Trading with court enforceable undertakings under the Australian Consumer Law (the ACL) after the Office of Regulatory Services (ORS) expressed concern that certain provisions of the Vehicle Registration Regulation may not have been complied with at four KTAS approved inspection stations between 1 May 2012 and 31 October 2012.

“Testing for these standards includes a visual inspection, a road test and mechanical testing of brakes on each vehicle. In some cases, only a visual inspection and road test, but no mechanical brake test, was performed on vehicles inspected by KTAS. As a result of this, the ORS was concerned that KTAS may have contravened section 29(1)(b) of the ACL.

“After KTAS was advised of the ORS’concern it acted promptly, cooperated with the ORS and undertook an immediate investigation to confirm that all vehicles presented for inspection in the ACT underwent brake tests to ensure those vehicles complied with ACT Vehicle Registration standards.” “The ORS takes these kinds of matters seriously because of the importance in ensuring vehicles’ brakes comply with registration standards”, Mr Corbell said.

The ORS is committed to road safety and to acting in the best interests of consumers. As part of the outcome negotiated by the ORS, KTAS has committed to employ a compliance manager with oversight of its ACT vehicle examiners, to make a $50,000 donation to the ACT-NRMA Road Safety Trust and to provide independent reports on its compliance program for authorised vehicle examiners periodically for the next two years.

In November 2012, the ORS wrote to all consumers it thought may be affected. Customers who did not receive that letter and who presented a vehicle for registration inspection to the KTAS outlets at Wanniassa, Phillip, Westfield Belconnen or Braddon between 1 May 2012 and 31 October 2012 can contact KTAS on 1800 065 010 and KTAS will check their brakes again free of charge. 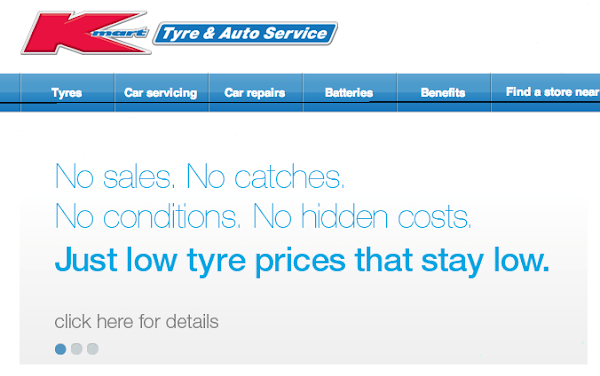 That 4 KMart outlets all failed to perform the locally decreed test would indicate that management issued an instruction that the test was not to be performed.

I had a workshop in Fyshwick do this to me when I took a vehicle in for rego testing. I think the guy was just lazy and he handed me a piece of paper with some technical data about the performance of my brakes, but given I was in the vehicle or workshop the entire time, I knew he hadn’t tested them. I didn’t call him out on it, because I didn’t want him giving me a hard time and failing the vehicle. It would have been hard to fail as it was in impeccable condition, but the guy held all the cards in that game.

Was it a case that they didn’t have the fancy portable brake testing gear, of did they have it and not use it?

Souhair Naoum - 2 minutes ago
Margaret Dudley love the idea and it can be done from home 👍... View
Emma Davis - 3 hours ago
And you are 100% correct! View
Heather Rattenbury - 6 hours ago
Put the call out... there are probably 100’s of people out there that could help with this View
Property 30

EJ Fallon - 6 minutes ago
Robert Knight - Canberra Progressives for Murrumbidgee does that ever not happen? View
Michael Drew - 31 minutes ago
Vickie Quinn eventually?!!? Hasn’t the total amount of public housing gone down in recent years. Does Labour care?... View
Ray Young - 48 minutes ago
Knew it... I lived there once for a short time and... yep, knew it would happen. View
News 20

Penelope Pollard - 35 minutes ago
I have beautiful handmade ones that were lovingly made by my mum and sister in lockdown in Melbourne..get sewing people! View
Kate Goldsby - 2 hours ago
Wendy yeah I won’t bother making them I’d just pay someone, but yes, I need to get some For everyone View
Ãine Ní Tighearnaigh - 4 hours ago
Better to be proactive and wear a mask to reduce the risk. Many people just don't observe the Physical Distancing requirement... View
News 20

Ray Young - 49 minutes ago
I remember that... it rocked us all... View
Gabriel Spacca - 2 hours ago
I’m shocked. Shocked I tell you.* *May not contain actual shockedness.... View
Russell Nankervis - 2 hours ago
I lived in Bathurst at the time but came for tertiary open day in 2010. Had to drive up the round a bout in Mitchel to get ar... View
News 26

Bill Gemmell - 50 minutes ago
I will certainly look at it but am worried this proposal will lead to price inflation from suppliers and installers. View
Robyne Mitchell - 51 minutes ago
Clinton Berry yes they can better preparation of road base in the first place View
Jack Hearps - 51 minutes ago
David Jackson and 'muppets' show is copyright by ScoMoses for the LP ... remember Turnbull debacle when looney religious zeal... View
News 5