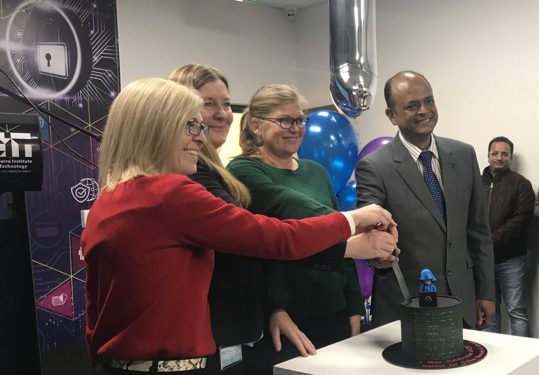 Cyber security training at Canberra Institute of Technology in Reid will receive a $4 million boost as part of a federal Labor Government’s plans to deal with emerging threats to the delivery of services online.

The specialist Cyber Security Training Centre will be scaled up and designed to respond to the growth sectors in big data, analytics, and space-related technology roles for large infrastructure, including the Australian Public Service, in the ACT and region.

Last November CIT launched its Training Security Operations Centre (TSOC) and tech-collaboration space at Reid to address growing industry concerns, with the ACT Government contributing $700,000 to the facility. It also received funding from Austcyber and is a collaboration with local firms Nova Systems and Fifth Domain, and ANU.

This week CIT celebrated its first year of delivering cyber security training, with a Tech Show at Reid.

Ms Gallagher said Labor wanted people to learn the skills they needed in state-of-the-art facilities and to do it in the nation’s capital.

“Labor has a plan to invest in the facilities that train the best-skilled workers right here in Canberra. We want it to be seamless for them to take the skills they learn into workplaces, like the Department of Defence, on the forefront of the mission to keep our public sector data safe,” Ms Gallagher said.

“Boosting national security and protecting government networks is becoming more and more important. Labor has a plan to make sure this gets the highly skilled specialist workers it needs.”

Labor candidate for Canberra Alicia Payne said the funding injection was a win-win for Canberra.

“This exciting new facility will provide an opportunity for young people to get the skills they need to get a job, but also will see an investment in local jobs during the construction phase,” Ms Payne said.

“This is an investment from a Federal Labor Government in the ACT economy and in the jobs of the future.”

CIT’s Head of Cyber Security and Games Dr Abu Barkat said this week that cyber security had gone from strength to strength in such a short time at CIT.

“Our cyber security courses are changing the workforce and national security, shifting students into careers that are servicing new and emerging industry needs and driving the ACT and Australian economy,” he said.

“CIT has now welcomed 300 cyber security students into the college within 12 months of operation. We have already produced three graduating classes from our Graduate Certificate in Cyber Security and are so proud that students representing our Certificate IV cohort will be our inaugural graduating class from that program in July 2019.”

The upgrades are part of Federal Labor’s $200 million Building TAFE for the Future Fund aimed at revitalising TAFE campuses across Australia.

If elected, Labor says it will make more than $1 billion in additional investment in TAFE, including 150,000 additional Apprentice Incentives, 100,000 TAFE places with no upfront fees, 20,000 adult apprentices and 10,000 pre-apprenticeship programs.

Geoff Withers - 11 minutes ago
Registration charges in the ACT should cover parking costs, its ridiculously high. View
Michael Roy - 17 minutes ago
They really aren't, I would suggest reading "the high cost of free parking" by Donald Shoup. You can also read about demand b... View
Alan Vogt - 24 minutes ago
Graham Smith a challenge I agree. Having run large sporting events for a period of my working career I have a little experien... View
Opinion 100

Redgum - 29 minutes ago
Better Renting is correct on one point only. The decision to invest in a rental property is a business decision. Investments... View
News 10

kenbehrens - 49 minutes ago
Government charges contribute towards the high cost of rent in Canberra. It's Government policy to increase Rates, to a level... View
Geoffrey Bell - 3 hours ago
Mandy Truman $206 cheapest share place i could find. https://www.allhomes.com.au/share/search?region=canberra-act&district=gr... View
Mandy Truman - 4 hours ago
I'm full time uni and I got made redundant from my job and then got a casual job but haven't had work for 10 weeks. I would h... View
News 246

Claire O'Brien - 57 minutes ago
My sister broke her back on this same flying fox in the late 80s/early 90s. The drop is too high in areas. My daughter did na... View
Lifestyle 3

@the_riotact @The_RiotACT
Canberra #food blogger Alec Morris is encouraging more families to cook together with his colourful #pasta creations. And he finds #inspiration in some unlikely places! https://t.co/PDvKuqqLhz (19 minutes ago)