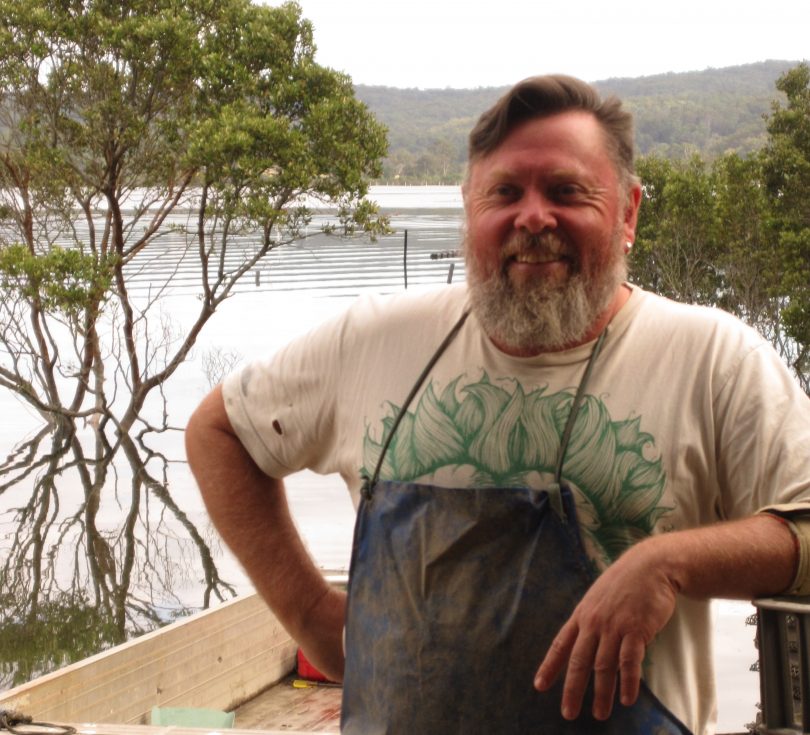 If you’ve ordered oysters at Ben Willis’s Aubergine or Temporada restaurants in Canberra recently, then chances are they’ve been sourced from Wapengo Rocks Wild Organic Oysters on the South Coast.

The first certified organic Rock Oyster farm in Australia, Wapengo Rocks is the brainchild of a former NSW ambulance officer who swapped the high-intensity life of an intensive care paramedic to be like an oyster farmer mate of his who drank a lot of beer and giggled all the time.

“I said, ‘Donny I want to do want you’re doing’. I said that if a farm comes up for sale let me know,” says owner Shane Buckley.

In 2007, the opportunity arose at Lake Wapengo, between Bermagui and Tathra, and the seller became his mentor, introducing him to the new, more sustainable way of growing oysters.

“He introduced me to slats and single seed oysters. That was what gave me the idea to just run with it, that direction, and stick with it because it is the future of oyster cultivation,” says Shane, who was quickly sold on the idea of its minimal impact on the lake and the product.

Instead of standard ‘post and rail’ cultivation techniques, Shane uses the floating ‘dynamic long line’ system that has less impact on the lake bed and encourages sea grasses to regrow where they previously died off due to over-shading.

The long lines with attached floating baskets actively move across the top of the water and ‘sway’ in the currents, letting more light in.

Using only recycled or recyclable materials rather than industry standard treated pine and tar coated sticks, Shane is not only running a more sustainable operation and contributing to the health of the lake but also producing a better oyster.

“If you saw the way it was done in the beginning it was pretty ordinary. They used to heat tar up and dip tomato stakes into it and let them drain out in the water, and you’d see a slick come off them, it was awful,” he says.

“I couldn’t deal with that, the idea of putting that into the water and having that slick come off. Secondly, the shape of the oyster was awful. Now we get these lovely uniform cup oysters. The stick oysters were really bent and misshapen because of the nature of how it grew, all clumped together, and then it grew around itself. Now with these more modern techniques they become single oysters at a very early age. They grow more uniformly, with consistent shape and depth, which is the way you need them to present on a plate.” 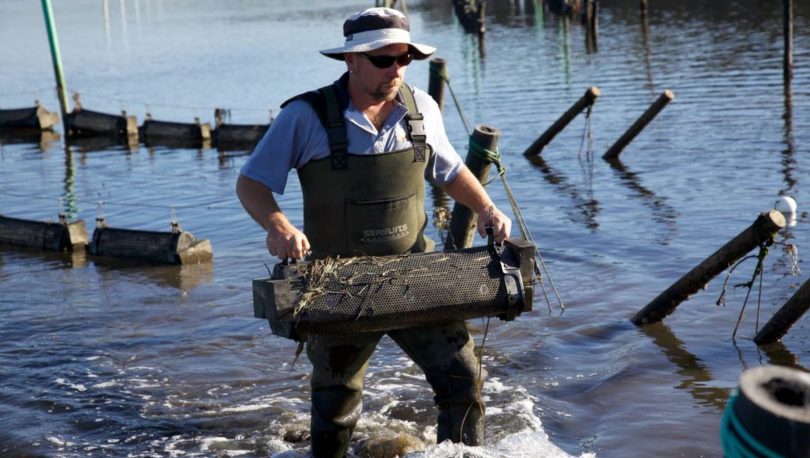 Shane handling one of the floating infrastructures on Lake Wapengo. Photo: Wapengo Rocks.

The floating plastic infrastructure is like a venetian blind, says Shane, “and the oysters catch on that, and after they’ve grown to a big enough size you bring them in, somewhere between August and November, and strip them off.”

But it was a major investment in time and capital with Shane having to close down old operations and re-equip over several years.

Shane bought his mate Donny’s farm in 2012 and now he has about 20 acres of water but with only about a third of that under production. He is poised for a major expansion.

His business has benefited from the growing interest in provenance and sustainability.

“It’s part of the food journey people travel now, they like to understand where their foods come from, how it’s been produced, the people behind it,”says Shane.

His best asset is the near-pristine water of Lake Wapengo.

“The water quality is as good as you get here. You can see our catchment – Mumbula Mountain, where our water comes from, is completely surrounded by national park. There are few properties, mainly bush blocks and one small dairy,” he says.

The flavour profile is seasonal but unique, and they are a superfood, with high levels of zinc, calcium, magnesium, and Omega 3s.

“When they are really fat, they’ve got a real soft poached egg consistency to them, a creaminess, vegetal flavour – leguminous,” says Shane.

Shane says the Sydney Rock is a special oyster that doesn’t grow anywhere else in the world and Bermagui to the border is the golden triangle, with the stretch to Tathra the main area.

He says the industry has only really taken off in the past eight years as a valued product.

“We sell at three-and-a-half to four years of age, so it’s a long time to be husbanding an animal in a crop. Back then we were getting 20 cents an oyster, which was absolutely ridiculous. There is better money now and more appreciation for them. Sustainable aquaculture is something that people can really understand,” he says.

Catriona Moxham - 57 minutes ago
Molonglo stage 3😢 View
Capital Retro - 6 hours ago
Living on borrowed time? It's actually more like living on borrowed money, from the Territory government to the unemployed. T... View
Lesa Schuster - 9 hours ago
The housing prices need to come down, it’s very hard for many people........it’s pretty city though and does not feel lik... View
Property 19

54-11 - 4 hours ago
Can anyone tell me how many times this year the Raiders have led at half time, and then lost the game? The same stats for the... View
Breaking 3

Kalo Arepo - 7 hours ago
Were they trying to jump the queue? View
Smackbang - 16 hours ago
How about you stop passing judgement on someone you know precisely nothing about? View
Opinion 82

consumeradvocatecanberra - 9 hours ago
Most folk don't get it. Canberrans love their cars and have done so for 30 years. It's quick and convenient. But, imagine car... View
Lucy Jane - 10 hours ago
4 day week for everyone but everyone gets a different day off. Will help immensely with traffic congestion and has been trial... View
Ronnie Adams - 14 hours ago
Helicopter 🚁 View
Community 15