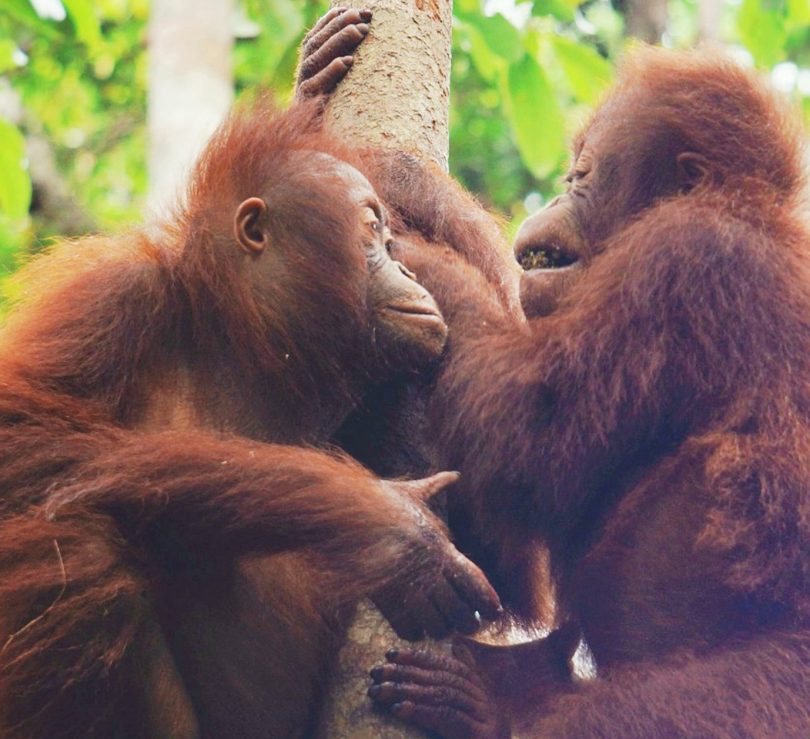 Orangutans could be extinct within a decade. Photo: Supplied.

Two world-leading orangutan experts, including one who teaches orphaned and separated animals to survive in the wild, will visit Canberra this month to garner support for what they say is a critical and urgent fight to save the Indonesian great apes from extinction.

The Borneo Orangutan Survival Foundation (BOS) will host an event at the Belconnen Canberra Labor Club on 16 August, detailing the orangutan’s plight while reporting on the Foundation’s recent success with its orangutan ‘school’.

In July, the Foundation released an additional two rehabilitated, endangered orangutans back into protected Borneo rainforest as part of its world-first, large-scale program to reintroduce rehabilitated orangutans into the wild.

The three-city Australian tour, which also takes in Sydney and Melbourne, is part of an ongoing effort to raise the funds to release a further 400 orangutans back into the wild. BOS says these great apes will be extinct in less than 10 years if the trend in deforestation for logging, mining, palm oil plantations, settlements and cash crops continues.

Canberrans can meet Anton Nurcahyo, one of the world’s primary orangutan conservation experts, and Lou Grossfeldt, a renowned specialist in captive orangutan management and welfare.

“While our program has been hugely successful, the battle to save the orangutans is far from over,” says Dr Nurcahyo, who has spent his life researching and understanding orangutans and who, as part of his PhD, was an integral part of the team that discovered a new species of orangutan in 2017.

“Running the largest great ape reintroduction program in the world is extremely challenging, with literally hundreds of people and thousands of dollars required for each individual release. There are also thousands of hectares of forest to look after.”

The journey for each orangutan back into the wild comes with a hefty $9450 price tag, including airlifting each primate to the release site in an effort to minimise the trauma of their relocation.

There is also the urgent need to acquire more land that can be secured as protected wilderness, so future released orangutans will be safe from human development, poaching and farming.

Canberrans will see amazing never-before-seen photos and footage from the Foundation’s Orangutan School, and learn about this great ape species, which shares 97 per cent of human DNA, from two of the world’s preeminent experts.

Young orangutans traditionally spend an average of eight years with their mothers learning the life-skills necessary to be self-sufficient but the Foundation typically rescues traumatised animals that have been separated from their mothers at a very early stage.

Each student spends between four and six years with a team of experts and volunteers who work around the clock to teach new skills including climbing, nest-building, sourcing food and identifying threats.

The Forest School has hundreds of orangutans in various stages of ‘education’, with many already eligible for release.

“We rely exclusively on donations to continue to protect injured, abused or tortured orangutans by providing medical treatment, attentive care and meticulous training to prepare them for a life of freedom, and we are calling on the Australian public to provide support, while there is still time to make a difference,” he said.

Orangutans on Tour, 16 August. at 6:15 pm arrival for a 6:30 pm start in the Fred Daly Room, Canberra Labor Club, 52 Chandler St, Belconnen. Tickets, $20 or $10 for child or concession. To purchase a ticket, make a donation or adopt an orangutan, visit www.orangutans.com.au.

Ota Save - 10 minutes ago
Sue Sutton No worries Sue. Happy to help ❤️ View
Sue Sutton - 52 minutes ago
My Mum has wonderful neighbours who have been helping keep her lawn in check. Thank you Ota and family xx... View
Bill Gemmell - 2 hours ago
Barbara Eglitis I was wondering how long it would take. Seriously, I had the Fowles St Park project in Weston in mind. Sugges... View
News 33

purplevh - 11 minutes ago
If a dog ever chased me on a bike I would turn around and chase it. They soon get the message when that happens.... View
purplevh - 15 minutes ago
I like your point about heavy vehicles but the same goes for a motorcycle licence BECAUSE you are the one most likely to be h... View
Opinion 13

ChrisinTurner - 1 hour ago
Living in the inner north we now have to start planning to leave Canberra during SummerNats. Already the mufflers are being r... View
Public Sector 170

The Opposition has had a motion to refer ACT public teachers' pay and working conditions to the Fair Work Ombudsman...
News 31

@the_riotact @The_RiotACT
A rehab #clinic specifically designed to assist #COVID-19 patients manage the ongoing symptoms of the virus is being set up at the University of Canberra Hospital https://t.co/WvD1IRUJRf (58 minutes ago)