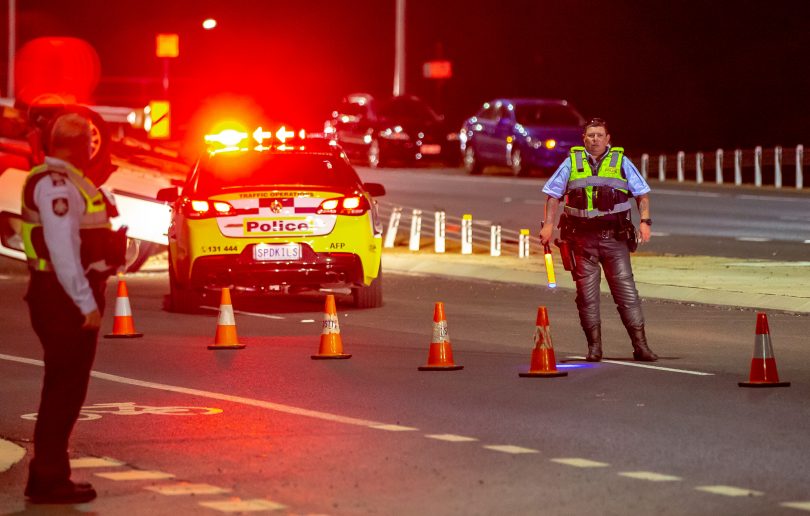 Police say it is not a “big ask” for motorists to slow down when they are passing an emergency vehicle on the side of the road after it was revealed only 10 infringement notices had been handed out since the laws came into effect last year.

In addition to the infringement notices, ACT Policing said they have issued 40 cautions for not slowing down when passing an emergency vehicle with flashing lights on the side of the road since the new laws were introduced on 14 April 2018.

Acting Superintendent of Traffic Operations, Detective Acting Station Sergeant Marcus Boorman said police have taken an educational approach to enforcement since the laws were introduced. He emphasised that the law was there to provide a safer working environment for emergency services workers on the road or roadside, as well as others present at the scene.

He said the 40km/h speed limit has been adopted to ensure consistency with speed limits applying around other vulnerable road users such as in school zones and at road works.

“Drivers are generally obeying the new regulations and slowing down to pass incidents to ensure that emergency service workers get to go home to their families at the end of the day,” he said.

“It is dangerous and intimidating when you are standing on the side of the road and people blatantly disregard what is going on and whiz past. We have to have our wits about us.

“If everybody takes their time to slow down, it is a safer environment for us.”

After completing a 12-month trial, which saw over 900 infringements issued, the NSW Government made changes to its law, now only requiring motorists to slow down to 40 km/h when the speed limit is less than 90 km/h.

NSW Roads Minister Andrew Constance said they changed the law to avoid “unsafe practices like hard braking” and to make it “safer for everyone”. ACT Minister for Road Safety Shane Rattenbury said the ACT Government will stick with its road rule.

When asked if he thinks the new law increases the risk for more accidents on the roads, Detective Acting Station Sergeant Boorman said his role is to “enforce the law and not debate it”.

“If people are paying attention on the roads and looking far enough ahead, then they can adjust their driving behaviour,” he said. “I have heard all the arguments but at the end of the day, the legislation was introduced for the safety of emergency services personnel.

“I don’t think it is a big ask for motorists to slow down.”

The infringement notice penalty for not slowing down when passing emergency vehicles is $257 and two demerit points.

Well without sorting the tailgating problems it would be a bit of a stretch to enforce this new law. I suggest the good sergeant could perhaps get his troops on the road a lot more and have a reality check.

How many near misses were recorded?

“When asked if he thinks the new law increases the risk for more accidents on the roads, Detective Acting Station Sergeant Boorman said his role is to ‘enforce the law and not debate it’.”

Strictly speaking that is correct but one could respond by saying this rationale would mean police could not debate or object to the implementation of any law, however stupid or dangerous. And as the acting station sergeant knows, there are many experienced police officers, both current and former, who believe this new rule will lead to more accidents. As for his statement “I have heard all the arguments but at the end of the day, the legislation was introduced for the safety of emergency services personnel,” could I just point out with respect that legislation should be judged on its consequences, not its intent. What was that saying about the road to hell?