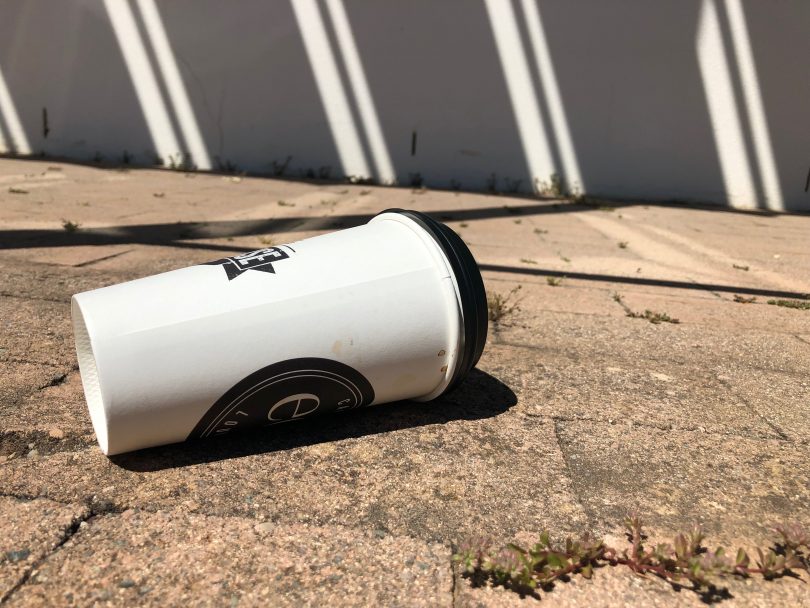 The new laws will increase the fine for dropping a small item of litter like a coffee cup from $60 to $150. Photos: File.

Fines for dropping a cigarette butt in the ACT will increase dramatically from $60 to $500 while littering a coffee cup will incur a $150 fine under the ACT Government’s rigorous new littering laws.

Under the new laws that were passed in the ACT Legislative Assembly on Tuesday, small-items littering, such as tickets or food wrappings, will incur a $150 fine instead of $60.

The laws, which will come into effect in the coming weeks, also increases the fines for not securing a load on a vehicle or a trailer from $500 to $1,500 and for not returning a shopping trolley when directed by an authorised person from $60 to $150.

Minister for City Services Chris Steel said the new laws holistically address littering in every form it might occur, and Canberrans should now expect stronger enforcement and penalties for people caught littering and illegally dumping.

Mr Steel said the new aggravated littering offence, which includes cigarette, syringes or matches, sends a strong message to the community about the impact of these items on the city.

“Cigarette butts are the most common form of litter on the planet, and have a significant impact on the environment, releasing toxic chemicals and microplastics,” Mr Steel said. “With a hotter and drier climate, cigarettes present a real fire risk to our bush capital, with 13 per cent of grass fires in the ACT started by cigarettes.”

Mr Steel said the new laws are easier to enforce, with infringement notices able to be issued to the owners of vehicles involved in illegal dumping, similar to speeding fines.

The ACT Government currently spends $3 million a year cleaning, with Access Canberra receiving 1,178 reports of illegal dumping during the first seven months of 2019. 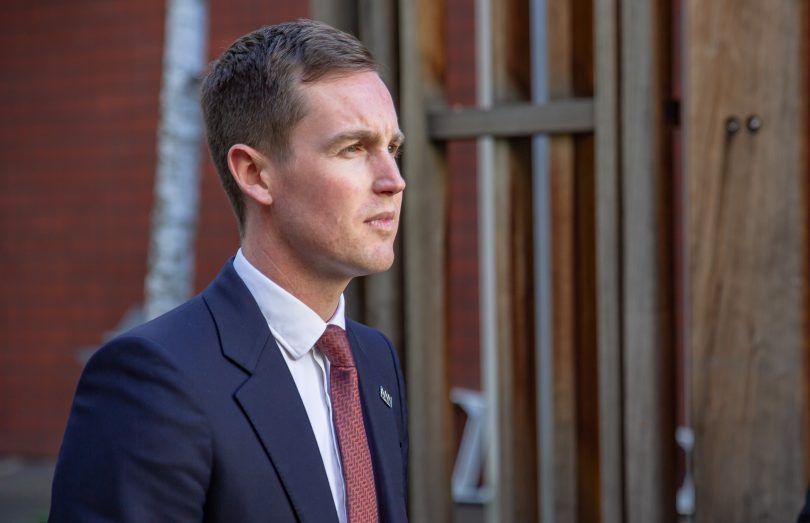 Mr Steel said the new laws will holistically address littering, in every form it might occur.

“People who illegally dump waste around our city are on notice today,” Mr Steel said. “These laws and give greater power to authorities to deal with individuals and businesses who choose who seek to spoil our environment or put the community at risk with illegal dumping and littering.”

The ACT Greens voted against the new aggravated littering charge, stating that the new charge would “disproportionately impact” some of the most vulnerable in our community. Greens spokesperson Caroline Le Couteur said the ACT Government’s well-intended legislation shouldn’t be focusing on excessively penalising the homeless.

“Slapping huge littering fines on the homeless, or on drug and alcohol users, isn’t rehabilitative – it’s punitive,” Ms Le Couteur said. “It isn’t going to change behaviour. It will not make our community safer.

“Instead, it will simply compound the disadvantage that those most vulnerable are already experiencing, racking up debts that they may not be able to pay.”

Ms Le Couteur said it isn’t clear if the aggravated littering charge is really even necessary.

“There has not been a single infringement for littering offences by TCCS City Rangers in the past three years, and only eight warnings issued,” Ms Le Couteur said. “In the same period, ACT Policing only issued one infringement for ‘environmental pollution’, and 12 for ‘public health and safety’ offences under the Litter Act.”

Wow! They’ve found another way to raise funds to keep the train running!

And who exactly is policing this, how often and whereabouts?

What about littering temporary road safety signs that sent taken down when no work is going on?

Good! Not often I agree with our “government” city council, but can support this move entirely!

Good move – but only as good as the resources available to police it. Some how after running the police force down to where they needed to recruit 60 new officers recently, you would most likely be very unlucky to get caught.

Cops will just need to hang round Maccas, KFC etc and will be able to make their weekly targets in about 1/2 an hour

I think the fine should be for ordering coffee in a disposable cup, that would eliminate the risk of litter.

I think its great news, no need and no excuse for littering and dumping

The only way to keep the streets clean, is through the hip pocket. Nothing else is working.

So legalising marijuana is going to have a positive effect on littering?

Apparently the homeless at Dickson Shops will be required to give internal organs to pay fines and littering children, 50 lashes…

Absolutely useless unless police do their jobs and actually enforce these laws. A bit like laws for cyclists….good in theory, but no-one will abide.

Hope they enforce it. We live adjacent to a reserve and people come up here for what ever reson and just chuck their rubbish on the ground. We have even had caravans parking overnight and leaving rubbish

if they put bins around then people would not litter!

Paul Waters exactly, at the fancy new Haig Park they have a ridiculous sign saying “please take your rubbish with you, nearest bin 500 metres this way”. Just put a bin there instead of the sign!

There seems to be a lot of trivialising the matter of littering. Whether it is a butt or a cup it is wrong. We all share this planet. It’s everyone’s responsibility. Butts might be small but they don’t break down and end up in waterways. I’m currently on holidays in the USA. in all four states I have visited so far you would be trying hard to find litter. The roadsides are clean and the forests have not a scrap. It’s pride people!!!!

Jennie Johnson what part of the US are you in cause I lived there for 45 years and this had not been my experience. The amount of litter disgusted me where I use to live. Since moving to the ACT, it’s much cleaner then where I lived in California, Florida, or Texas.

Gee they are desperate to try and pay for those days white elephant Trams!

This is great news but who’s going to police and enforce it. The nature reserves and roadsides around our suburb are always so messy. I’m sick of spending hours picking up after lazy people. Not doing it anymore. It’s a thankless task.

I’d be interested to know how many people have been fined for removing shopping trolleys from shopping centres. I bet none.

Wish there were penalties for customers who leave their rubbish on supermarket shelves.

Ok sounds good but what about all the stolen burnt out cars ??

Just sitting here in the park watching the old guy exercise his dog off lead near the children’s play equipment, while he enjoys a cigarette or two. Drops his butts on the ground under the no smoking sign, leaves the dog’s waste, jumps in his SUV and drives through the park to the road, leaving the playground to the pre school group that pops up for a play. None of these will attract a ranger visit. So I guess this new batch of rules will not be enforced either.

Get his number plate and make a stat dec. The cops will book him. I did it once for a particularly disgusting individual and the cops let me know later they issued the guy a fine.

Bill Gemmell you can be sure no fines will ever be issued. Just like the shopping trollies. Caroline Le Couteur was on the radio recently whinging how Canberra’s most ‘vunerable’ (sic) people would be disadvantaged.

Well, the cops called me back to advise they had fined the guy I reported, so they obviously will if they have enough evidence.

Pat Murray thanks. Don’t get me wrong, I abhore any littering but I cannot see the point of increasing the penalty for something they have no appetite for enforcing. It is a bit like planting trees and not watering them really.

These laws will only be as good as their enforcement. Let’s hope they’re enforced.

So how much if I put a butt in a coffee cup and litter?

Steve McGrory the price of that coffee just finished. I do that put my but in them

Anyone who litters is simply an asshole and deserves everything they get as a result.

Good. You shouldn’t be littering anyway.

Yeah, yeah. But if you don’t enforce it, it doesn’t matter how much the fine is.
I would love all smokers who drop butts to be fined. I don’t care if you smoke, I’m even willing to pay your medical costs through my taxes. Just don’t smoke near anyone else and clean up after yourself.

That was exactly my question: who and how would this be enforced?

Smokers more than cover their own medical costs via tobacco taxes. Why do you think tobacco hasn’t been banned?

Hmm… I’m not sure if the statistics support that, but it’s immaterial to this issue.

Here you go, agree with fining people for littering too. https://www.businessinsider.com.au/an-australian-senator-has-just-thanked-smokers-for-their-8-billion-staggering-generosity-to-the-economy-2014-10

Glenn, well there you go! I wish to extend my thanks as well.