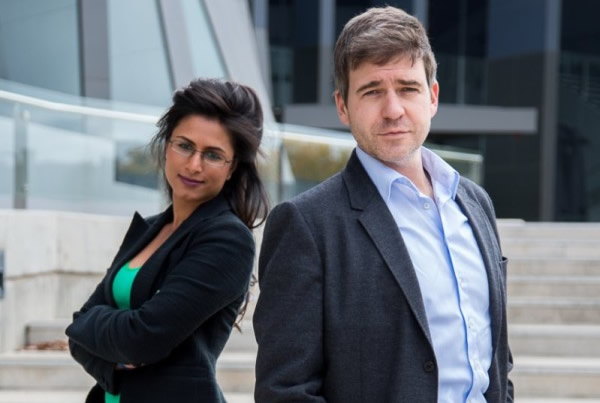 It’s half-time at a Brumbies home game and you’re craving a meat pie and a beer. The problem is that 20,000 hungry football fans also have the same idea, and you risk missing the start of the second half if you join the end of the queue.

Local mathematician Dr Priya Dev and IT entrepreneur David Elliot have the solution. They’ve developed an app that allows sports fans to order and pay for food using their smartphones. It’s called Qhopper, and its goal is to create a world without queues.

“If you look at the statistics, people spend more time queuing than they do laughing. I wanted to show that it’s possible to change that. Nobody should have to wait in lines when our phones can do it for us,” Dr Dev, who has a PhD in applied probability, says.

Chief technology officer David Elliot and his team at software development company Agile Digital helped Dr Dev to build a product that not only gets rid of queues, but also keeps customers up to date with how long their order is taking and sends an alert when their food is ready to be served. The app is available by connecting to Wi-Fi at any Qhopper-enabled venue.

“If you’re managing food at a stadium and it’s half-time, it’s like a wedding. There’s no room for error. You have a very small window to get people fed,” Elliot says.

“In that environment, system reliability, security and performance are critical.”

The pair says that Minister Andrew Barr and his media advisor Kurt Steel, who was killed in a bus crash in Bolivia last month, were particularly strong supporters both of the Qhopper concept and of technology entrepreneurship in the capital.

“We were deeply saddened by Kurt’s death. He was a great advocate of innovation in Canberra,” Dr Dev says.

Qhopper has received grants from the ACT Government’s Innovation Connect program, as well as from the ANU Connect Venture fund. Dr Dev and Elliott have also assembled a team of technical gurus, industry specialists and an advisory board that counts R&D expert Anne-Marie Perret from Capital Angels as a member.

Qhopper is now looking to expand both in Canberra and across Australia, with Dr Dev recently moving from Canberra to Sydney to support this growth. Locally, the Qhopper team is waiting on GIO Stadium Canberra’s upcoming WiFI upgrades, when the app will become more widely available. To experience queue-less ordering in Canberra in the meantime, head to Brodburger in Kingston, which has been using Qhopper for around four weeks – to what Elliot describes as “astronomical” success.

Dr Dev says that the app could also potentially reduce queue times and the risk of infection at ACT hospitals.

“As a virtual queuing system, Qhopper could be used by the ACT Government to solve the problem of waiting for services at facilities such as the ACT walk-in clinic, where people are forced to wait in small rooms with other people, which can be a health risk,” she says.

Sue Bink - 7 minutes ago
great news 👏👏👏 View
NiCe_tRy I_WoNT_LiE - 1 hour ago
Anyone who knows bruiser could've told you he would pass the test. Good on ya bruiser !!! View
Chris Pye - 2 hours ago
Yes!!!! There is still some good in the world! Absolutely wrapped for Pauly and Bruiser 👊 View
News 10